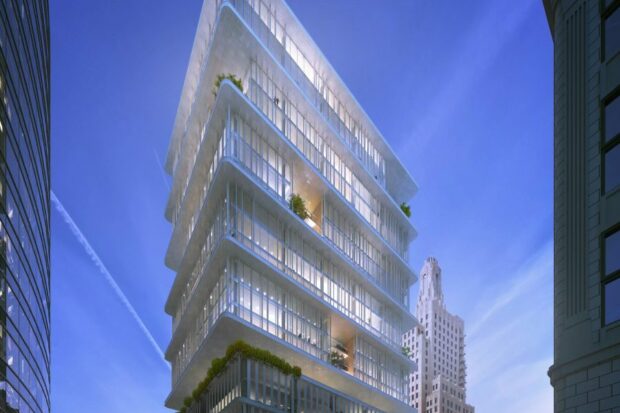 The City Council could today vote on a long-planned Downtown office tower known as Strata, a 250,000-square-foot development at the southwest corner of 13th and Main streets. It is across the street from the world headquarters of H&R Block, which owns the site and is planning the project along with developers Copaken Brooks and Jury & Associates.

The city’s Finance, Governance and Public Safety Committee approved the project Wednesday, sending the measure to the full council. In its latest form, the proposal calls for the city to contribute $36 million toward a 750-space parking structure. That is down from $69 million and 1,333 spaces in earlier proposals. The city would also contribute $27 million toward the building itself for a 28 percent revenue stake in the project, the profits from which will go toward affordable housing. Mayor Quinton Lucas and other council members have voiced opposition to the Strata plan in its previous forms, citing concerns about the amount of city subsidies being requested.

The newest ordinance, sponsored by City Manager Troy Schulte, says: “there has not been a substantial multi-tenant office building developed in the Downtown Loop in decades, and office vacancy rates are steadily decreasing as a result of the conversion to other uses of older office buildings” within the loop.

During the third quarter, the Downtown office vacancy rate was at 15.8 percent, higher than the overall metro rate of 14.3 percent, according to Cushman & Wakefield. During last year’s fourth quarter, Cushman tallied the Downtown vacancy rate at 17.7 percent.

At least two major companies are looking for new headquarters space in Kansas City, Mo. Blue Cross Blue Shield of Kansas City announced this week that it is looking to move or revamp its existing space at 2301 Main. Wealth-management firm Waddell & Reed is also looking to move from its Overland Park headquarters.

Developer Copaken Brooks’ brochure for Strata calls for a tower with 16 stories that will have a coffee shop and retail on the ground floor, an all-glass exterior and a “sky lobby.” Currently at the site is a Yard House restaurant and brewery.