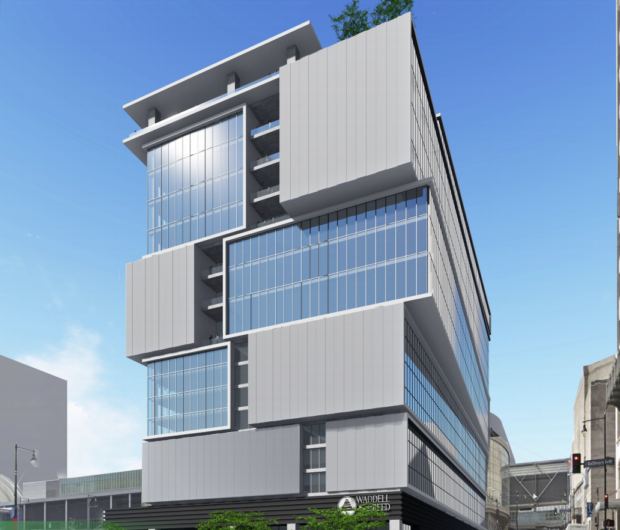 Waddell & Reed has signed a lease to move its headquarters from Overland Park into a yet-to-be constructed building in Downtown Kansas City, and company management expects construction to start within two months. The plans, forecast for completion in 2022, follows the City Council’s approval of the $148-million project at 1400 Baltimore Ave. last month.

Burns & McDonnell will construct the exterior of the 18-story 260,000-square-foot building, while HOK will design its interior. The developer and owner of the property is Financial Holdings Corporation, a unit of Merriman.

Waddell plans to bring 1,000 jobs to Downtown, for which the company is receiving $62 million in tax breaks from the State of Missouri to relocate from Kansas. There is also an incentive package that will be provided by the city to the project’s developer, Financial Holdings that includes a 15-year tax abatement for 50 percent of the economic activity generated by the headquarters and the issuance of $25 million in bonds to pay for construction materials. The deal was in the works prior to Kansas and Missouri signing a “border war” truce, saying the neither state would give tax incentives to companies in the K.C. metro area for moving across the state line.

“Our foremost goal is a location that allows us to build an environment that accommodates the workforce of tomorrow and enables us to attract and retain top talent to accelerate our growth strategy,” said Philip J. Sanders, the company’s chief executive officer, in a news release. “This site offers the opportunity to showcase downtown Kansas City to the thousands of visitors to our company, including management teams from major corporations across the country. “

The company was founded in Kansas City in 1937.