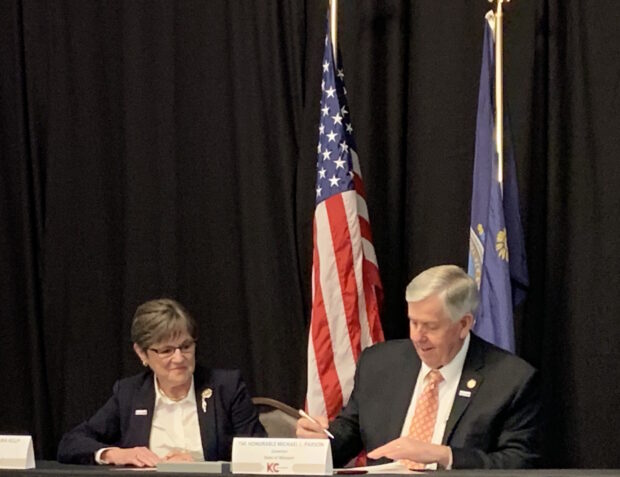 Businesses expecting special tax incentives to make a move from South Kansas City to Overland Park, or from Lee’s Summit to Lenexa, are out of luck.

Kansas Gov. Laura Kelly and Missouri Gov. Mike Parson just signed an agreement between the two states that says state-incentive programs won’t be used to lure a company in the Kansas City region from one state to the other and will only do so in the case when the move is the result of net new jobs being created by a relocating firm. (Companies in the process of moving have until an Aug. 28 deadline to do so and gain incentives that were previously allowed.)

The measure, signed at Memorial Hall, in Kansas City, Kan., aims to put an end to competition between cities along the border to trying to take jobs from a city in its backyard, a practice that did more harm than good, said Parson. “You don’t have to be a scientist to figure out this was a bad deal for both states,” he said, stressing that such moves cost $330 million in lost tax revenue that could have gone toward significant projects, such as repair of the Buck O’Neil Bridge that spans the Missouri River between downtown Kansas City and Riverside.

The two came together after signing legislation in each of their states. For his part, Kansas City Mayor Quinton Lucas has made his own pledge to not use economic incentives to try to attract Kansas companies to come to his city.

The agreement between the two states has put a national spotlight on the region as an example of a region’s entities working together to create economic development that benefits the overall area.

“Boundaries will no longer define the potential for progress,” Kelly said, pointing out that the cities making up the Kansas City region need to work together in order to attract deals like the U.S. Department of Agriculture’s recently announced move of major offices to the area; potential firms moving to the area’s Animal Health Corridor, which lies from Manhattan to Columbia; and possibly games that are part of the 2026 FIFA World Cup international soccer competition.

Hallmark Cards Executive Chairman Donald Hall, Jr., who was on hand, pointed out: “As a region, we are a major American city, but if divided by a state line, we are not. For too long, we have competed against ourselves in economic development.”

The agreement, between Kelly, who is a Democrat, and Parson, a Republic, comes at a time when the two parties seem to agree on very little nationally.

“I hope Washington, D.C. takes a good look at what happened here today, when a Republican and a Democrat governor can sit down together and do what is right for the people of our states,” Parson said.