The Virgin Hyperloop One, which will be able to take passengers from Kansas City to St. Louis in 30 minutes, according to the company behind it, needs a 12-to-15-mile test track in Missouri for the new form of transportation to become closer to a reality in the state.

Using vacuum tubes, magnetic propulsion and other technology, pods that resemble an airline fuselage would transport passengers and light cargo through a tube that is planned to run along Interstate 70 across the state. Besides beginning and ending points in Kansas City and St. Louis, a third stop would be in Columbia, Mo. 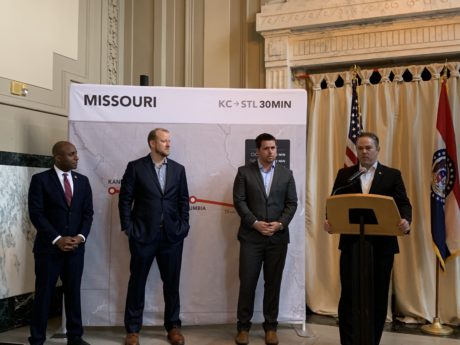 Missouri House Speaker Elijah Haahr, along with other representatives of a House Special Blue Ribbon Panel and city leaders, unveiled the panel’s findings in a 176-page report at Union Station. The test track, estimated to cost $500 million, Haahr said, will likely be built on a site at one of the three proposed Hyperloop stops, from where the rest of the track would be built out.

Virgin Hyperloop One, based in Los Angeles and affiliated with investor Richard Branson, has stated it intends to put out an RFP (Request-for-Proposals) for what is being called the National Certification Track. Haahr said that the state will work with companies interested in packaging together a plan. “The goal is to get it here first,” he said, pointing out that the first state with a test track will likely benefit from having the $10-billion project built in its entirety.

If  that happens, the Blue Ribbon Panel pointed to several huge pluses for Missouri, including:

The panel also addressed how the project would get paid for. There are potential federal grants that could provide funding, port authority and private activity bonds,as well as sizable private capital sources looking to deploy funds.