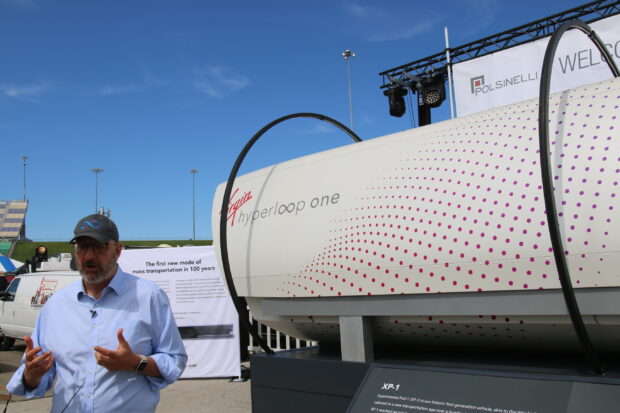 An example of what could one day shuttle passengers to St. Louis in 30 minutes made an appearance at the American Royal World Series of Barbecue last weekend. Virgin Hyperloop One, which is currently testing magnetic high-speed transit systems that could dramatically cut travel time between cities, brought a prototype of a pod to the Polsinelli tent at the event. Virgin Hyperloop One CEO Jay Walder was on hand to discuss the project.

The cost of the endeavor, which would involve building an above and below-ground tub along Interstate 70, connecting Kansas City and St. Louis, is estimated to be around $10 billion. Missouri is considered one of the frontrunners by Virgin due to interest state officials have shown in the project.

The plan has a promising foundation since the right-of-way for 70 percent of the tube’s path is secured as it is on interstate land, said Greg Kratofil, Jr., co-office managing partner at law firm Polsinelli. But this will have to be a public-private partnership with a “substantial private investment,” he pointed out.

“While it will cost a lot, it will also bring a lot in the way of jobs and investment to the entire state of Missouri,” Kratofil said, adding, “This will be a tourist piece. It will attract people from all over the world to see and be here.”

Additionally, the Hyperloop’s terminus, planned for the eastern part of the city near 18th and Vine, could mean major economic development in that area. The earliest the loop is expected to be up and running, if it secures funding and makes it past layers of government approvals, would be 2030, project officials have said.