Tenants in the office and industrial sectors of commercial real estate haven’t stopped leasing space in 2019, despite a lot of chatter about a coming slowdown in the U.S. economy, according to new reports by brokerage firm JLL.

On the office front, year to date through the end of the third quarter, tenants leased 331,078 square feet, keeping vacancy at 11.2 percent, generally where it stood last year, even though rents are on the rise, hitting $21.54 per square foot, up slightly from the same period in 2018.  There is currently 770,662 square feet of office under construction, including Block Development Co.’s CityPlace Corporate Centre I, which will total just over 120,000 square feet and is expected to open next June in Overland Park. Worldwide Express will reportedly lease 45,000 square feet of the building. 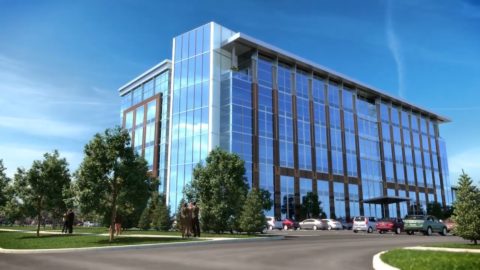 A rendering of the CityPlace development.

The third quarter saw some large deals on the transaction front during the third quarter, including the acquisition of Sprint’s corporate campus, in Overland Park, by Wichita-based Occidental Management for a reported $250.9 million. Anther large deal was the JLL-brokered purchase of the three-building Executive Center by Brain Group for $22.8 million from Onward Investors.

The biggest industrial news during the quarter was the possibility of Google building a $600 million data center  at Hunt Midwest Business Park, in the Northland. But what has occurred so far this year is the leasing up of just under 1.7 million square feet of industrial space. That new supply has contributed to rents dropping 11 percent year over year, to $4.22 per square foot, but vacancy has remained at 5.4 percent. Among the projects underway are the 542,640-square-foot Logistics Centre V, at KCI Intermodal Center, and the 540,000-square-foot Building 6 at Northland Park, in Clay County. Both are scheduled to open in the first half of 2020.

JLL’s outlook for the near future remains positive for both office and industrial in the Kansas City area, though it points out that fear of an economic downturn is giving companies and investors in the sector pause.