When the state launched the Best in Midwest initiative last year, it had found that compared to 14 regional peer states, Missouri ranked near the bottom in several key economic and community development categories, such as new jobs created and GDP growth. Not pleased with this news, Gov. Mike Parson had the Missouri Department of Economic Development overhauled.

Michael Lanahan, its director of business and community solutions, spoke to the Missouri Economic Development Financing Association (MEDFA) at the Crossroads Hotel about the changes that state is undergoing to improve its business environment. 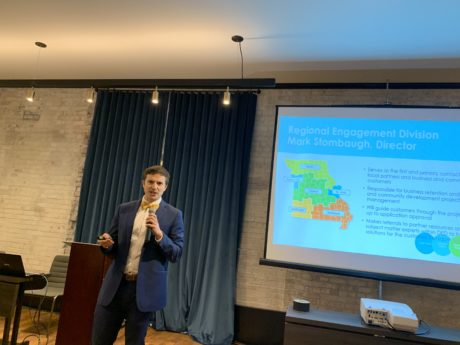 Michael Lanahan, director of business and community solutions for the Missouri Department of Economic Development

“We have to build a highly effective sustainable organization capable of serving businesses and communities well for years and years to come,” he said. “We have to fundamentally look at everything we’re doing and how we approach it.”

So far, the changes have been pretty large. The department was completely reorganized by Parson’s team, and staff was cut from 865 to 177, making it “laser focused on business development and community development,” Lanahan said, and it was divided into four primary divisions: Missouri One Start, which focuses on job recruitment and training; the Business and Community Solutions Division, concentrating on business and community development, as well as international trade; the Strategy and Performance Division, which prioritizes initiatives through data and analysis; and the Division of Tourism.

This reorganization is partially why several initiatives were put into place in August, Lanahan said, such as the end of the Kansas City Kansas-Missouri border war, the development of a statewide broadband plan, the Missouri Works Deal-Closing Fund, and others.