The Cost of Success

I was raised in a spirited family and as a Chiefs fan as long as I can remember. In a photo with siblings and cousins as small kids at Christmas, we were all wearing the same Chiefs sweatshirts. My Dad bought tickets to Super Bowl IV before learning he had to teach a continuing real-estate course, in of all places, Minneapolis. He missed the January 1970 Super Bowl IV in New Orleans,
but Mom attended with several couples and close family friends.

Tickets for the first World Championship at the Los Angeles Coliseum in January 1967 were $12—below is then-KU senior Pete Smith’s ticket. My folks paid $25, as I recall, for Super Bowl IV. Inflation suggests the value of this year’s ticket should have been $93. 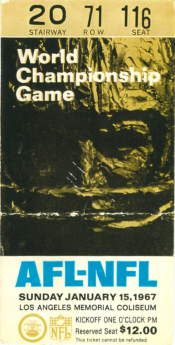 I ordered our airline tickets to south Florida in the final quarter of the the Chiefs final regular-season game against the Chargers. The stars did in fact align, as the always-dangerous New England Patriots were beaten at home by the Dolphins, paving the way for the Chiefs to enjoy home-field advantage throughout the AFC playoffs.

I’ve been to a couple of Super Bowls and will be the first to admit that tickets are challenging to come by and seemed each time to be awfully high-priced. Fast forward to February 2020. Not only the way the Chiefs earned home-field advantage but coupled with the comebacks against the Texans and then the Titans, Chiefs fans migrated to south Florida like Canada geese.

We flew into Ft. Myers to see friends before heading over to Miami but were shocked to see nearly every seat not only on the flight to Atlanta but also to Ft. Myers filled with Chiefs fans.

The Saturday before the championship game, we attended the Fan Experience in Miami. I know events like these are created to primarily entertain those traveling to top-tier games, but this is where we felt the squeeze on pricing. There are a kazillion Mahomes jerseys floating around out there and some of them are higher-quality, with embroidered numbers. Of course, there was an apparel store as one exited the Fan Experience and the Mahomes jersey, albeit with a scribbled autograph, was priced at $975. More surprising was the family arguing about available sizes. All four of them bought a jersey. Respectfully, I grew up and perhaps still reside on the other side of those tracks.

Hats off to the organizers of the Lot J pep rally event held in Ft. Lauderdale the evening before the game. Within a two-block area there was nothing but Chiefs fans and thousands of us.
It was as crowded at Power & Light or Westport, but happened to be nearly 1,300 miles from home and a fair distance from Hard Rock Stadium in Miami Gardens. I believe this was organized in part to boycott the ban on tailgating at the stadium. Well-played!

I tried to buy a couple of tickets to the game in advance, but honestly, values were nuts. I brought a fair amount of cash with us and never have I felt more out of place than on game day. Eighty crisp $100 bills when compressed exceeded 1-inch in thickness, but still was not enough to purchase two tickets to the sporting event.

No organization is the region advocates success more than Ingram’s, but this experience was incomprehensible. Values of tickets to the game were driven by a starving Chiefs fan base and the possibility of this being a once-in-a-lifetime experience.

I suspect for each of the estimated 45,000-plus Chiefs fans in the stadium, there were likely five or six Kansas Citians or avid Chiefs fans outside the stadium and scattered throughout south Florida—many of whom were trying to buy tickets—and driving market values out of sight. The journalist in me was asking legitimate brokers, if there is such a thing, how the values compared to previous years.

Last year, when the Patriots played and beat the Rams, low-end tickets on game day were selling for about $3,500. On game day this year, ticket prices continued to rise. Nearing kickoff, the lowest price for a poor seat in the stadium was about $6,500. That is if you could even locate one or a pair. One of the other problems is that scammers have gotten pretty good at printing reproductions, and it’s arguably a gamble to buy from even those considered legitimate.

When the 49er QB Colin Kaepernick took a knee and disrespected our flag, and  the ridiculousness that occurred on the player as well as the owner and administration side of the NFL a few years ago, many lost respect for the league as an institution. Having tried to cope with the current high prices, I’m sure we’re not the only ones that are feeling a bit financially strained.

What can’t be diminished are five decades of loyalty to our team and how pleased we are of our “Comeback Kids,” especially through the the three games of the playoff season. I suppose it’s not to be unexpected that after half a century, the NFL and especially the Chiefs would want to capitalize as much as they possibly could and squirrel away a few bucks for leaner days. I just wonder if they haven’t gathered a few too many nuts in the process.