Keep Your Feet on the Ground, and Keep Reaching for the Stars

Thirty-five years is a long time to administer the Corporate Report 100 ranking, and it’s hard to believe that our ownership team just concluded its 24th consecutive ranking. We’ve seen it all over the years and I can’t begin to tell you how much work and time this project takes, not only for companies and their accounting firms; it also takes a remarkable amount of work and diligence from our team.

Why do we do it? The short answer is that the Corporate Report 100 is the publication’s biggest annual competitions and it’s a tradition. It’s also one of the most-anticipated reports the business community enjoys each year. I personally believe it’s appreciated because we’re able to put large and small businesses on the same playing field to allow them compete fairly with growth metrics.

I have plenty of great memories with the Corporate Report 100 competition, but one of my favorites was the annual phone call from the late Neal Patterson. Cerner has earned it spot on the CR100 ranking on 22 occurrences, and its highest rank was 4th place in 1987 and again in 1990. That performance over the years has earned Cerner the No. 1 rank on our All-Time Winners Honor Role.

After the first few years, Neal would call and simply say, “Well?” I knew it was Neal. He wanted to own the CR100 and it was fun to see how this inordinately successful icon of business valued this program. Neal always pressed for the outcome—not just the percentage, but the actual rank. As the years passed, it would become increasingly challenging to earn a place in the CR100.

A few years before Neal passed away I got the call. “Well?” We belly laughed hysterically after I told him Cerner ranked No. 101. Neal was less interested in any one year’s ranking than he was in the longevity of being on the Corporate Report 100 ranking.

He knew that maintaining success and growth of 25 percent or more each year would ensure that Cerner would own the all-time record of appearances and it would contribute to building a massive organization. He also knew that when revenues exceeded $1 billion, that goal became more challenging. A lot more challenging. Cerner’s record may one day be surpassed, but we’re proud to have navigated that journey with our friend Neal, Cliff Illig and the good folks at Cerner. 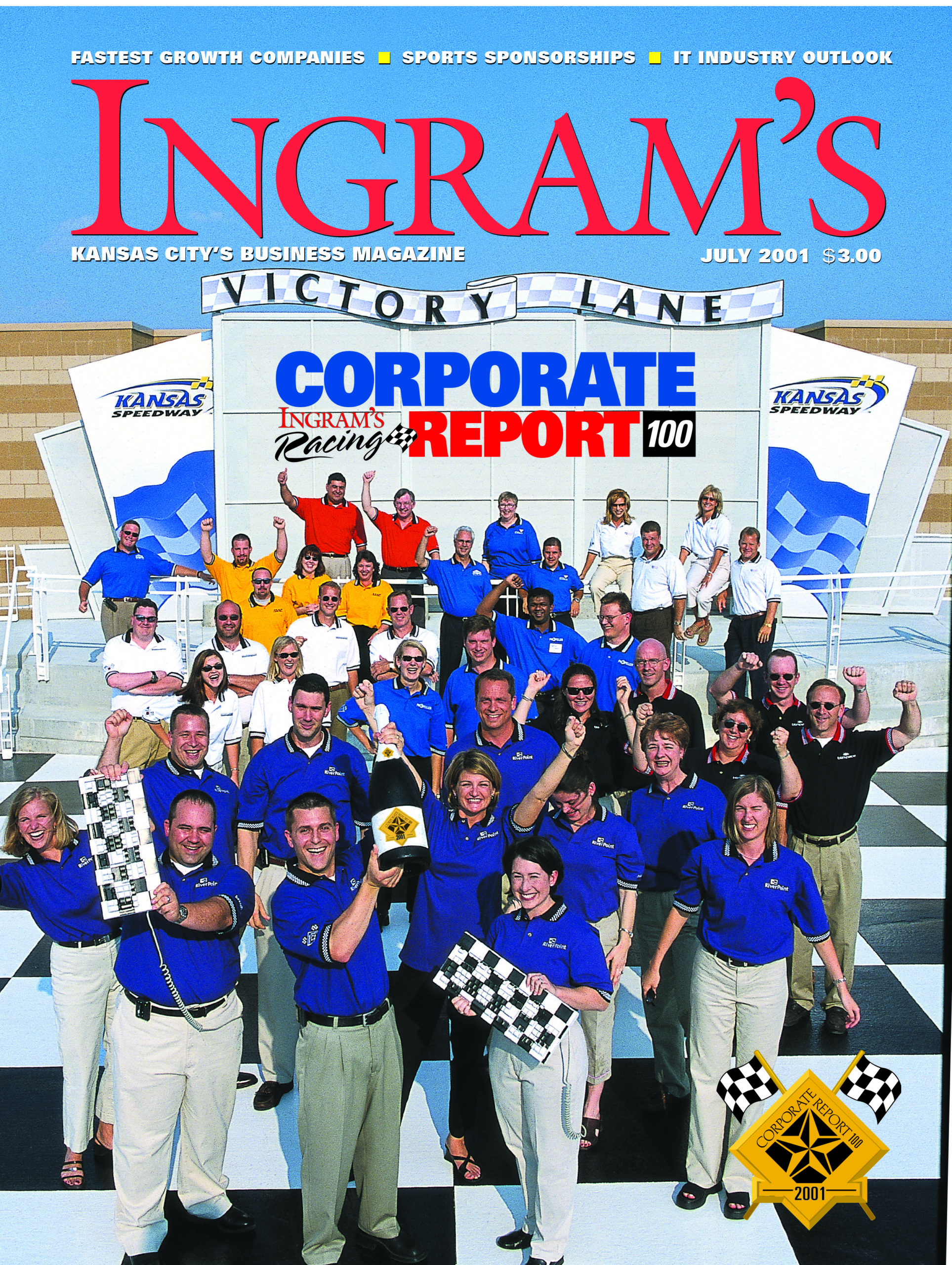 When we bought Ingram’s in 1997 we established a theme that year of “On the Fast Track” with a front-cover image of sprinters coming out of the blocks at the UMKC track. Craig Sands was our photographer in this era and he did an extraordinary job, especially on the 1998 front cover “Climbing to the Top.” Craig literally climbed on top of the spire of 1201 Walnut and shot an exec in a suit with a briefcase climbing a ladder with one hand. We received a call from OSHA, and I simply marveled at the power of Photoshop.

In 2001, we started the tradition of inviting the CEOs and occasionally a couple from each of the Top 10 companies. That cover was shot in Victory Lane of the new Kansas Speedway. Each of the Top 10 companies wore different-colored embroidered shirts with checkered flag accents. A couple years later we convened at the T-Bones stadium near the Speedway in printed jerseys. The photo shoot on the field during the game and entertainment that day was a hoot. We had teams racing around the bases, doing push-up competitions on top of the dugouts and about anything else that would entertain.

We were shooting the cover at the J.C. Nichols Fountain in 2005 when all hell broke loose and the rain chased everyone into Frandizi’s at 46th and Main—our contingency bar. We shot the best cover we could in a restaurant full of wet people.

Things do indeed change with time, as does the Corporate Report 100 ranking, but I genuinely hope this competition continues long after we’re gone. We’re proud of the CR100 program and to provide our readers an annual report on the firms that are enjoying significant growth.

It’s with pride that we introduce to you our 35th Class of Corporate Report 100 winners and the fastest-growing companies headquartered in the KC region.

I’d like to share a quote from the late Casey Kasem to encourage and challenge each company on Ingram’s CR100 and all that aspire to be: “Keep your feet on the ground and keep reaching for the stars.” Or should it say, “Climbing to the Top.”