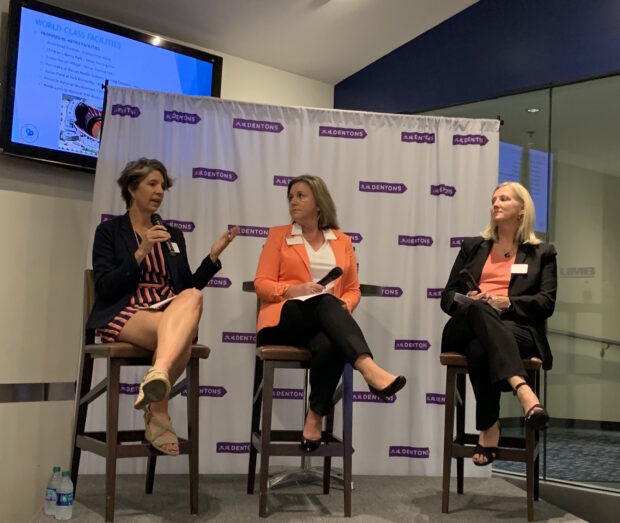 If some of the men’s 2026 FIFA World Cup games are played in Kansas City, the economic impact on the local area would likely double that of a Super Bowl, speakers said Tuesday during a panel discussion at Children’s Mercy Park.

Kansas City is competing with 17 other U.S. cities to become one of 10 to have games, in addition to competitions in Canada and Mexico. The prospect of elevating this region’s soccer profile to global status drew a three-person discussion panel and a number of select invitees to  the home of the Sporting Kansas City, in an event sponsored by Dentons, the world’s largest law firm.

Though no one is sure what cities FIFA will pick, or exactly when (city officials have been told some time in 2021), Kathy Nelson, president and chief executive officer of the Kansas City Sports Commission and Foundation, said the metropolitan area is likely in the steepest competition with Cincinnati, Denver and Nashville to land games.

“We have to think really big and think differently than other cities,” said Nelson. “We are a smaller city in the grand scheme of the plan, so we have to prove that our community, our residents, our soccer players, and our business community wants this, and they are going to support it.”

If that is proven, and the area is chosen, it would have major payoff for this city. Using past World Cups as a measurement, having about six games here would have an economic impact of about $620 million, more than doubling that of the projected $260 million impact that a Super Bowl would bring, Nelson said. The Kansas City area would physically host tens of thousands of international visitors, and the broadcast viewing audience would total around 1 billion worldwide.

Kansas City has a lot going for it in the bid. Arrowhead Stadium, where the actual games would be played, is the fifth-largest primary arena in all 17 cities in the running. There are several facilities around the metro area that would serve as suitable facilities for a “team base,” which a country would use throughout the month the games are played, such as Swope Park Soccer Village, and the Chief’s summer training facility in St. Joseph.

And as with other business-related enterprises in Kansas City, location in the middle of the country is an advantage. It’s arguably the most central location for both U.S. coasts, in addition to being between Canada and Mexico.

However, there is is a large public-transportation hurdle. “We have to get all of those fans out to Arrowhead at no cost,” Nelson said. “All of the people coming from other countries do not have cars. Uber can not keep up with that.”

In the meantime, officials from the sports commission, the Chiefs and Sporting KC, along with other business leaders, are regularly planning and holding meetings with FIFA officials and other cities in attempts to bring the games to Kansas City. When asked how local businesses could get involved, Nelson suggested visiting KC2026.com, where people can sign a petition and make donations to the effort.