Who’s the Next Downtown Anchor? 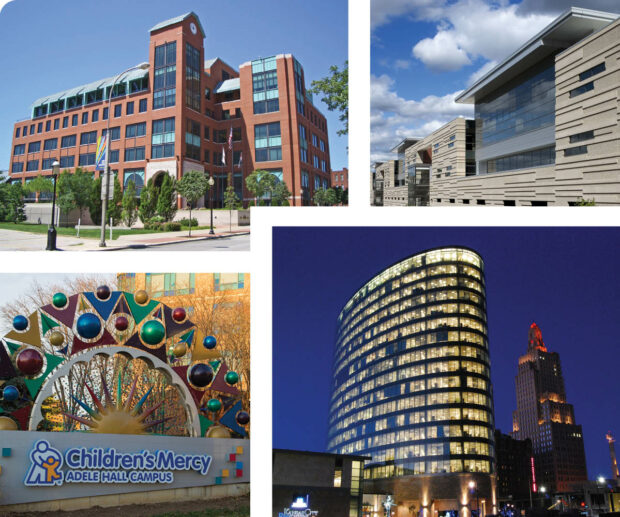 Blessed with large organizations that employ thousands, Downtown looks to a new wave of growing companies that can add vibrancy to the central business district.

Financial services, health care and government at all levels are sectors that drive employment in Downtown Kansas City. And Downtown companies like Kansas City Southern Railways, Hallmark, H&R Block and DST Systems have brands that project Kansas City’s image onto a national stage—and beyond.

But the long-term key to increased employment Downtown, advocates say, is finding companies with a few dozen employees that are poised for dramatic growth, and supporting them on their way to hiring hundreds, even thousands, of workers.

That’s where the Spring Venture Groups of the world come into play. This fall, the company announced its move into Downtown from Leawood, where it had operated since its founding in 2010. As a practical matter, that location on the Kansas side of State Line Road was just yards removed from the Ward Parkway business corridor in south Kansas City. But the move into Downtown was both significant and strategic.

Today, the fast-growing parent company has more than 100 workers operating under the flags of United Medicare Advisors, Generation Life Insurance and Open Market Quotes. A Downtown location, said CEO Chris Giuliani, would be a key to doubling employment in the near term.

“We have large hiring needs in the coming years, so the appeal of a Downtown address was the ability to recruit from every part of the Kansas City metro from a central location,” Giuliani said. But there was more to it than what the company gets out of the deal: “Downtown offered an experience to our employees, rather than simply a place to work,” he said. “With the diverse options for dining, shopping and gathering, we’ve found that our people really enjoy the feeling of being a part of the city.”

With the region’s well-known system of ample interstate lane miles—you can cross the metro area from Bonner Springs to Blue Springs within 45 minutes—one might not think that centrality would be an issue for employers. Giuliani begs to differ.

“The central location gives a huge edge in recruiting from the whole KC metro area,” he said. “With highways coming in from all directions, residents from each county in the metro can get Downtown in a reasonable time. Being located in any other part of the metro can close certain geographies, from a recruiting perspective.”

That’s true as well for a fledgling company called CorEnergy Infrastructure Trust, a real-estate investment trust that—for now—has just 14 employees. Rick Green, the former Aquila and Utilicorp United chief executive, sees a Downtown location as a tool for increasing that number. Being Downtown, said CorEnergy’s chairman, “has a lot to do with our business strategy and our future. If we think about CorEnergy and what we need, the central location, the competitive space pricing, the adjacency of other business resources of Downtown Kansas City really hit all of our needs as a business.”

Managed by an affiliate of Tortoise Capital Advisors, part of the Bicknell’s family of investment companies under the Montage Investments banner, CorEnergy set up in Town Pavilion this fall after relocating from the mother ship near the I-435 corridor in Leawood.

“As we grow, being closer to KCI for our travel, as well as for our energy partners here and our energy partners across the country, there’s quite  bit of flow back and forth,” Green said. “I think it’s better to be in the central business district Downtown than perhaps farther out in the metropolitan community.”

But, like Giuliani, he cites the power of a central location to draw talent from throughout the region. “We put our business interests first, quite candidly, but we recognize that our employees are in the central city, south and east and this point,” Green said. “Over the last year, we’ve roughly doubled the number of employees, but in terms of continual growth, we’re not sure where we’re going to be drawing from.”

While parking Downtown can be a challenge, both acknowledged, there are other issues to consider. For Spring Venture Group, the company’s biggest concern at this point in its growth cycle is the risk of higher taxes. “We’re not interested in the status quo, but rather growth,” Giuliani said. “Every incremental dollar that goes to taxes can’t be reinvested in the business to hire more people and grow.”

Downtown’s ability to remain vibrant, boosters say, is rooted in its ability to serve as a three-legged stool for drawing people: Those who want to live there, those who come for the recreation and retail options, and those who work there. Giuliani and Green represent the kinds of companies that will strengthen that third leg, but it’s not as though Downtown lacks for business anchors.

Estimates of the number of people drawn to work Downtown during the work week range as high as 100,000. Approximately half, though, are connected to about a dozen companies and organizations. That leaves the central business district vulnerable to significant losses when a major employer leaves Downtown for other locations, as with AMC ’s recent move to Leawood.

Of the 13 biggest Downtown employment anchors, the split among those that are public sector and those that are for-profit companies runs about 60–40 in favor of corporations.

Downtown’s traditional role as a center for government—federal, state and local—will be strengthened in 2014 as the General Services Administration moves roughly 800 of its employees, along with 200 workers from other federal agencies, into 150,000 square feet of space.

In December 2013, the GSA announced it would put those workers into the 2 Pershing Square building, just north of Union Station.