Who Really Cares (and Why They Can Afford To)

With all due respect to the pope, no other economic system has ever produced the blessings that flow from capitalism.

In Congress, during his historic visit, Pope Francis spoke eloquently about fighting “poverty and hunger” and creating and distributing wealth. As a Catholic, I know popes are supposed to say platitudinous things like this. That is what popes do.

It is America’s punditry I object to, the whole lot of them, from those who crowd our newsrooms to those who haunt their mothers’ basements.

After years of Christian-bashing in general and Catholic-bashing in particular, our chattering classes convinced them-
selves that Pope Francis had come to America specifically to praise them for their good thoughts and to scold our business classes for their bad deeds.

I was able to see this up close. The pope’s visit inspired many a good thought-thinker to flood my Facebook page and Twitter feed with “memes”—a word I promise never to use again—whose snotty, bottom-line assumption was that they and their pals really “care” about the poor and my pals and I don’t care at all.

But do they really? A few years back, prominent social scientist Arthur Brooks set out to discover who really does care. “When I started doing research on charity,” Brooks wrote, “I expected to find that political liberals—who, I believed, genuinely cared more about others than conservatives did—would turn out to be the most privately charitable people.” 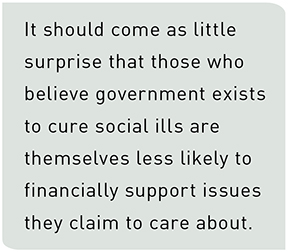 Brooks was in for a surprise. When his early findings led him to the opposite conclusion, he assumed he had made some sort of technical error. Said Brooks, “I re-ran analyses. I got new data. Nothing worked.” A rare bird, Brooks then did what all good scientists should do when faced with contrary evidence. “In the end,” said Brooks, “I had no option but to change my views.”

A rarer bird still among pundits of any species, The New York Times’ Nicholas Kristof, when confronted with an inconvenient truth, changed his views as well. “We liberals are personally stingy,” Kristof conceded in his review of Brooks’ book, the well named Who Really Cares.

Kristof observed that he and his fellow travelers talked a good game about compassion, especially when they could off-load that compassion on to the government. But when it came to individual contributions to charitable causes, “liberals,” Kristof admitted, “are cheapskates.”

To be sure, much of conservative charity is directed towards church-related causes, but as Kristof was honest enough to acknowledge, “Conservatives are more generous than liberals even to secular causes.” Then too, a disproportionately high proportion of liberal giving goes to the arts, not to the poor.

Given that America is the most religious and conservative of the Western democracies, it follows that we are also the most generous. What helps too is that here, much more so than in Europe, our entrepreneurs align their interests with social conservatives, not with social progressives.

As a result, according to Matthew Bishop and Michael Green, the authors of the book Philanthrocapitalism, Americans are more than twice as generous as the next most giving people, the British, and roughly 12 times as generous as the French. These numbers are based on percentage of GDP. In real dollars, they would be much higher.

There is a reason we in the west have more money to contribute, and this, alas, the Vatican understands no better than do our basement-dwellers: the medieval Church spread not only the Gospel, but it also spread modern capitalism, the seeds of which were sown in ancient Israel. 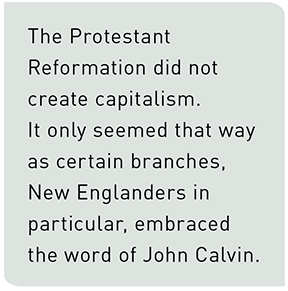 No other civilization has performed economically with anywhere near the success over time of the Judeo-Christian west. This was not an accident. Jews were the first people to divine a monotheistic God, one who cared deeply enough about His people to share with them a how-to guide to life. An atheist might challenge the source of the law, but he would be hard-pressed to deny that it transformed human history.

By contrast, the Code of Hammurabi, developed during the 18th century B.C., has all the inspiration and ethical punch of an IRS handbook. Word to our political betters: enduring civilizations are not built on regulations.

In Mosaic law, violations had existential consequences: They offended God. Violators risked not just jail. They risked eternal damnation. Like no other code before and few since, Mosaic law respected the individual and treated those under its sway more or less equally.

The capitalist enterprise hinged on the rule of law. Its entrepreneurs had to depend on the efficacy and fairness of that law. This understanding may have originated in Mosaic law, but it was transmitted to Europe through the active agency of Christianity.

Although the collaboration between Jews and Christians has not always been easy—something of an understatement, I know—it has been a remarkably productive one. By 1500, Catholic Europe had devised or refined the major financial instruments that undergird the capitalist enterprise to this day. At this time, all of the world’s great commercial centers—Venice, Florence, Bruges, Antwerp, London—paid fealty to Rome.

The Protestant Reformation did not create capitalism. It only seemed that way when, after the split, the Catholic Church identified its interests with the old world mercantilism of the Spanish Empire, while the New Englanders in particular heeded the good word of John Calvin.