When a Killer Comes Calling

American business is in the fight of its life as the nation wrestles with both a public-health crisis and a self-imposed sequel to the Great Depression. 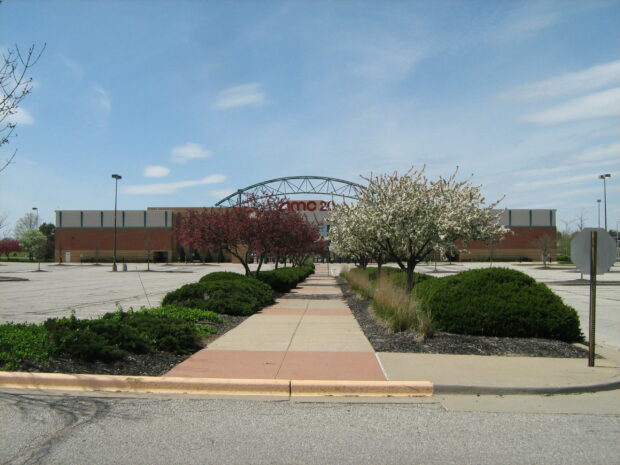 Film Noir: Closing AMC Theatre locations during the outbreak has cost the company hundreds of millions in revenue.

As the nation completed a fourth week of its self-imposed recession, the battle to contain the spread of the COVID-19 pandemic produced some positive reports from the front lines.

The University of Washington’s Institute for Health Metrics and Evaluation has been tracking the spread of the virus since that state became the flashpoint for the outbreak in January, and is regarded as having the best data sets available on cases identified, deaths attributed to the virus, and general trend lines. It projected that efforts to limit the spread had paid off with a peak in total cases nationwide, and deaths, along with peak demand on health-care resources, on Saturday, April 11.

For Missouri and Kansas, the IHME says peaks will occur a day apart, on April 28 and 29. Overall, it projects 68,841 deaths nationwide by Aug. 4. Including 1,712 in Missouri and 555 in Kansas. The data also shows that neither state should expect to see ample capacity with its health-care resources, especially the number of available hospital beds overall and ICU beds.

Those numbers are dramatically lower than initial projections of half a million dead, hospitals nationwide overflowing with ICU patients and health-care providers being forced to decide who would live and who would die because of a scarcity of equipment to treat everyone. History, and a new national discussion coming about cost-benefit analyses during a public-health crisis, will determine whether those numbers warranted the pain of a sudden-onset recession ordered up as federal and state officials sought to contain the spread by keeping people home and closing down businesses deemed non-essential.

For the health-care professionals involved, that will be a short discussion: They see the value of economic sacrifices as paramount in the effort to minimize the fatality rates. They see the risks being taken by care-givers and health-care providers, who in some hard-hit communities account for one-fourth of the COVID-19 patient load.

Lee Norman, secretary of the Kansas Department of Health and environment, is both a former chief medical officer at the University of Kansas Health System and a physician in the Kansas National Guard. He’s seen medical care delivered in some challenging circumstances in postings around the world, but never anything of this scale.

“The hardest part for me, personally, is feeling like the people in Hawaii must feel when a tsunami is coming closer and closer,” Norman says. “Right now, too many people are just sleepwalking through the day, thinking they can skirt this exemption or requirement. This is necessary: The tsunami is rolling in, the numbers are still increasing. But too many are still taking this casually, making a game out of it, seeing what they can get by with. It flies in the face of common sense.”

Like many in population-health  roles, Norman is starving for more and better data to help the state manage the crisis. “We need more population studies to find out who has had the virus and didn’t even know it, whether it’s 8 percent, or 68 percent. We don’t have the testing capacity.”

His fears cover much ground: The prospect of overwhelmed medical facilities should the outbreak surge beyond projections here, and the chances that the state’s ag-production muscle could be hit, forcing plants to slow or shut down production in key processing areas like Garden City’s meatpackers.

“We are intimately tied to the national economy,” Norman said, and nationally, “we are rapidly approaching Great Depression-type numbers for job losses. It’s becoming a ticking time bomb, quite honestly.”

Across business lines, COVID-19 is picking winners and losers in business. The losers include nearly all of the hospitality sector, with restaurants, hotels, resorts and bars closing up operations. Their employee ranks have contributed the bulk of the 16 million jobless claims filed in the previous three weeks, volume the nation has never seen before. And it could get worse: some federal economists say up to 47 million workers—nearly a third of the work force—could be idled before the pandemic is brought under con-
trol in the U.S.

While the losses have hit almost every sector, the impact of the shutdown has rippled through the economy in different ways.

Health-care providers have tightened budgets, anticipating revenue losses because they deferred elective—and generally, more profitable—procedures in anticipation of their hallways being turned into MASH units, as we’ve already seen at overwhelmed hospitals in New York. And some, like large companies in multiple sectors, have announced sharp reductions in executive pay and benefits.

In a particular blow to the commercial pride of the Kansas City region, one of its the biggest companies and crown jewels, publicly-traded AMC Entertainment, has been the object of bankruptcy speculation by analysts. The Leawood company, which notified landlords that April rent payments would not be coming, has in effect been without revenues for a month with theaters worldwide shut down.

Food producers have pivoted to direct their production to grocery stores, which have experienced huge demand for certain products, including bread, eggs, cereals and fresh meat. At the same time, commodity and livestock prices are plunging as farmers are unable to get goods into production; milk producers, with the pipelines literally full, have resorted to dumping milk that will spoil outside the normal supply chain.

Banks have been inundated with small-business loan applications under the CARES relief act, even as their lobbies remain locked to the public. And in the financial-services world, business sales that have been in the work for months are in some cases being put on hold and potentially strapped as buyers hold off until profitability issues have been addressed.

“If a deal in the works is marching toward due diligence, there’s a higher probably than not to get those deals done,” says Bill Conway of CC Capital Advisers. “But others starting now are probably not likely to get done in the  time frame initially anticipated. There’s a lot to be sorted out, and from the valuation perspective, I would intuitively say that valuations will reflect the current environment.”

In other words, depressed.

Other business, including those that had been transitioning their staffs to remote work for several years, are holding up well, and in some cases, finding work picking up pace. Neal Sharma, president of DEG, has seen both dynamics at the Overland Park digital marketing firm.

“In some areas, we’ve seen clients slow down or pause projects as they recalibrate; in others, clients are leaning  in to what they have going with us because they recognize this unprecedented disruption is accelerating their needs,” Sharma said.

Now up to 360 employees, he said roughly 80 were fully remote before the crisis hit, providing an operational template for quickly moving the others to remote platforms at home. But in moving from public appeals for voluntary measure and into city and state shutdown directives, “it was crazy how each day brought new information that affected an important operational decision,” often compelling a response categorically opposite what the leadership had decided just a day earlier.

As an entrepreneur, he says, “you can empathize with the fear the startup entrepreneur or small business owner is feeling. I do think there is a desire in that community to make sure we are supporting each other. I’m sure a  lot of them do not have the access to banking relationships, the expertise or the capital to sustain. These are likely the kinds of businesses that don’t have months and quarters of capital in reserve; they may have only days or weeks.”

He agreed that, coming out of a selfimposed recession, the country would see changes in the way business executives process definitions of growth, and why it’s needed to create the kind of financial muscle that can weather a true black-swan event like this.

“I think many companies haven’t had to confront the dangers of complacency until a crisis hits, and when it does, they are forced to look at every aspect of what they’ve created and determine what is sustainable,” he said. “The places where they have sought comfort before are not places where they can seek it as easily in the future.”