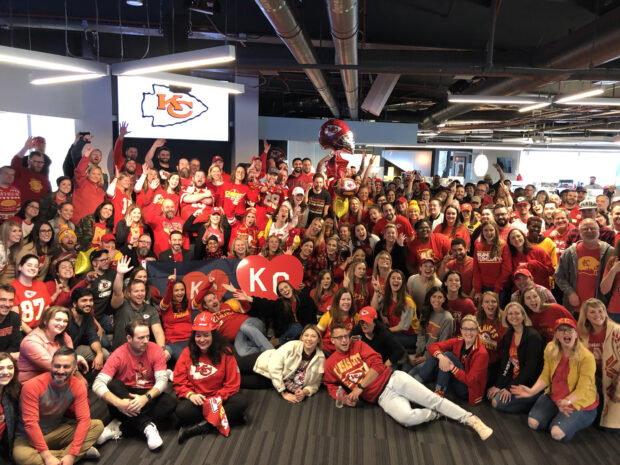 For the Kansas City Chiefs as an organization and for its players, a Super Bowl victory has some definable financial benefits. But can the broader region capitalize on the recent publicity to advance its civic goals?

For the select few who earned a roster spot on the Kansas City Chiefs in the season just concluded, the final few weeks produced a handsome return on their sweat equity.

Each of them collected $31,000 for winning their divisional match against the Houston Texans; they earned $56,000 apiece for beating the Tennessee Titans in the AFC championship game; and they capped off a nice earnings stretch with individual bonuses of $124,000 for winning the Super Bowl. Not many of us can boast about $211,000 in found money over a three-week period.

The collective cup runneth for players and the team in other ways: uncountable benefits from media exposure, brand awareness and fan excitement, and, somewhat more countable, merchandising royalties. If you’re Clark Hunt or one of his siblings in the ownership family, it is indeed good to sit on a throne of the Kingdom.

But the team isn’t alone in reaping the benefits of Kansas City’s first Super Bowl appearance in half a century. The signs of shared prosperity from winning the NFL championship have been all around town since before the first playoff game in early January—right down to the pop-up vendors hawking unlicensed team apparel. At least until they got busted.

The Super Bowl outcome couldn’t have come at a better time for the city and its efforts to promote itself as a sports mecca. Just a day after the confetti flew in Miami, the Greater Kansas City Sports Commission Foundation submitted its bid package to host NCAA basketball tournament games for four more years; the Super Bowl exposure added additional luster to ongoing efforts to make this region World Cup soccer venue in 2026, and it lent a veneer of validation to the NFL’s selection of Kansas City as the host venue for the 2023 draft.

In the immediate aftermath of the title game, the most outwardly visible sign of the economic impact from a championship run might best have been discerned at entertainment venues. Anyone trying to find a nook to cram into during the playoffs is probably still sporting bruises.

By far the biggest collection of those fans showed up at Power & Light District for each of the three post-season games. For many, coming to this party rendered expenses a secondary concern. And the crowds were thick enough—by some estimates, 20,000 additional people poured into the business loop for each of the three playoff games—that you’d have been well-advised to order an extra oxygen tank with your next round of drinks.

But how deep and long-lasting is the impact, beyond the immediate party scene and merchandising high?

Daniel Funk, a Temple University professor whose specialties include the economics of sports, tackled that very question for phillyvox.com when the Eagles made it to the Super Bowl two years ago. The short answer, Funk said was, not much. “The city will get a destination image bump when a team goes to the Super Bowl,” he said. “The increased level of publicity and exposure along with related news coverage on the team and event will spill over and provide some destination branding for the city. This can create interest in visiting the city at a later date, which could bring new money into the local economy via tourism. There will certainly be a spike in merchandise sales for each team.”

The better way to look at the civic ripples of a Super Bowl appearance, he said, is that they create something of an advertising opportunity for a city, especially with one-third of the country catching the game on TV. Unfortunately, it’s impossible for civic and business organizations to effectively budget over the course of a year for an appearance that only two of 32 teams are going to realize.

And at $10 million a minute for a televised ad during the Super Bowl, that’d be a risky proposition trying to anticipate and capitalize on that civic branding opportunity.

One factor, however, works in Kansas City’s favor to leverage economic impact from the game: its small-market status. Major cities like New York, Philadelphia, Chicago, Dallas and Los Angeles have a significant awareness factor built into their brands. The Minnesota Vikings, Tennessee Titans and Carolina Panthers, like the Chiefs, hail from communities that would, all other things being equal, get a bigger recognition pop from being in the Super Bowl.

The biggest economic benefit, sports economists say, is with what’s known as “psychic income,” a phenomenon wherein residents of a city awash in good feelings means people are more willing to spend money. But there’s more to it than that.

A Super Bowl appearance, Funk said, “creates city pride, which has important implications for the development of social networks and relationships as well as self-esteem. It’s hard to quantify Psychic Income or put an economic estimate on the value of improved city pride, but we can observe this benefit through the behavior of residents and businesses before, during and after the event, as well as media coverage that occurs.”

A less-optimistic view of economic impact comes from Victor Matheson of Holy Cross College. He’s a professor of economics who has cited other studies that say the effects of the game on factors like employment, government revenues, taxable sales, GDP, and personal income, “while generally positive, are a fraction of those claimed by the league and sports boosters.”

Similarly, John Affleck, writing in Fortune magazine, argued that “while there is ample evidence that championships make people happy, there is very little evidence that it makes people rich.

Other college-level sports economists have found that a city’s title-winning team does little to affect regional bottom lines, with one exception: a slight increase in personal incomes in the year after those victories.

Making all of this nearly impossible to accurately gauge is the inability anyone has to determine whether a dollar spent in celebration would have been spent elsewhere—merely a diversion of cash flow—or invested in something with greater potential return than mere retail activity.

But this much should be clear: As of right now, on a national level, Kansas City’s stock might be at an all-time high.

The View From Arrowhead

So what does the good fortune have to do with the Chiefs’ fortunes? That’s even harder to say. Because 31 of the 32 teams in the NFL are private enterprises, getting inside their true finances is nigh on impossible.

The one outlier is the publicly owned Green Bay Packers, whose annual tax filings are eagerly awaited by sports economists for the narrow window they provide into NFL team finances. Since the biggest slice of revenues, from broadcast rights, is divided into a 32-piece pie, one can discern some elements of those financial pictures.

That’s significant, because pro football is the 800-pound gorilla of televised sports. Nothing else in America comes close to the revenues it generates. The most recent television broadcast package, worth $8.8 billion, yielded nearly $275 million per team. On top of that come radio broadcast rights. Beyond that, each team is able to hold onto what’s known as local revenue, from ticket sales, concessions, suite sales, parking and corporate sponsorships, among others.

Consider from that list just the parking. At $60 per vehicle per game, and 19,000 parking sports, the Chiefs would have realized roughly $12 million in revenue over the course of this year’s 10 home games.

Then there are the revenues from selling Chiefs-branded gear. According to Halo Branded Solutions, retail sales of licensed professional sports products is a $12.8 billion industry, yielding $698 million for pro sports leagues—about 5.5 percent of the total sales volume. While it didn’t break that out by sports specialty, Halo did note that 31.2 million U.S. residents (nearly 1 person in 10) had purchased clothing with an NFL team logo in the previous 12 months.

Teams engage in those product sales for more than the revenue. When you wear what is, let’s be honest here, a billboard for a sports team, you’re helping that franchise reach untapped audiences and build its brand loyalty—and at a microscopic .005 of a penny per impression, by Halo’s reckoning.

A final consideration for the financial well-being of the team: The place where they hang their helmets. Arrowhead Stadium was constructed largely through a $107 million bond issue approved by taxpayers in 1967, about $43 million of which was specific to Arrowhead. In 2019 dollars, that would be $263 million, which doesn’t include the inflation-adjusted $440 million that went into the three-year renovation completed in 2010.

Just as the Hunt family itself, residents of Jackson County have a great deal invested in their team.

Beyond regional impact, there are other metrics that speak to broader economic performance in the wake of the Chiefs’ victory. Not all of them are encouraging. Take, for example, the so-called Super Bowl Indicator for assessing the performance of equities markets in the 11 months following the big game.

He didn’t have much of a data set to work with after just four Super Bowls, but sportswriter Leonard Koppett is credited with first identifying the SBI. It posited that if the Super Bowl victory haled from the NFC or legacy NFL teams from before the 1969 merger with the AFC, investors could expect a bull market. Conversely, if an AFC or legacy AFL team—the Chiefs claim status of both—were to win the big one, we could expect a market pullback.

Probability theory suggests that if there were nothing more concrete about the connection between the game and Wall Street, the indicator would be batting close to .500 over the course of 54 games. Funny thing is, the SBI has withstood the test in 40 of the 53 previous years. This, despite missing the mark each of the past four seasons.

But as any wealth manager can tell you, an indicator that presupposes a market downturn after the Chiefs victory in 2020 isn’t exactly risking much—the market itself has been flirting with all-time highs in recent months. The chances of a pullback, with or without the firm of Mahomes, Kelce & Hill weighing in, are probably pretty good this year.