Landing at No. 9, the University of Kansas School of Medicine in Kansas City, Kan. has been noted as one of the best medical schools for primary care by U.S. News. This is a giant leap for the school, which came in at No. 38 in the same national ranking last year.

Among the top 10 medical schools for primary care in the U.S. is one right in the region’s backyard: The University of Kansas School of Medicine. 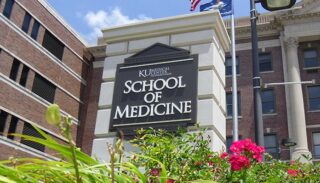 The school made No. 9 on U.S. News and World Report’s rankings of medical schools in the United States for 2022.

This is a major improvement and significant leap for the medical school, which landed at No. 38 last year. This is also the first time it has ranked in the top 10 since U.S. News began producing primary care rankings for medical schools in 1999.

U.S. News determined rankings through surveys to 191 medical schools nationwide. These schools were evaluated on the basis of faculty resources, the academic achievement of their entering students and qualitative assessments by schools and residency directors.

“Producing excellent primary care physicians for the state of Kansas and beyond is a crucial part of our mission, and we are proud to be recognized for our hard work toward achieving that goal,” Executive Vice Chancellor of the University of Kansas Medical Center, Robert D. Simari, M.D., said in a news release from the University. “Primary care doctors are often the first doctor patients see when they become ill, and they are essential to helping people stay healthy by identifying risk factors to prevent disease and in helping them navigate and coordinate care for chronic conditions.”