UBS: ‘Proceed With Caution’ In This Economy 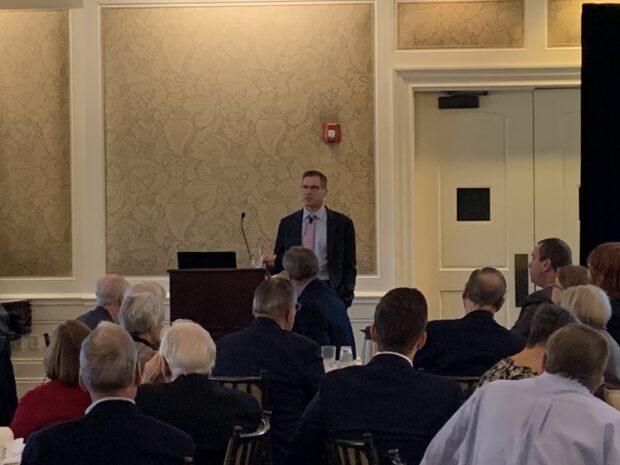 No, there isn’t a sure sign of a recession hitting the U.S. economy any time in the near future, but investors should be aware that there are some elements in place that could create a slight downturn, or at least returns that aren’t as fruitful as this decade-long economic expansion has provided.

And yes, most of the reservations surrounding the economy’s future are related to the uncertainty about how long the United States’ tariffs on Chinese-made goods will last and what kind of lasting impact they will have on domestic businesses, said Jeremy Zirin, head of equities at investment bank UBS, at a recent speech at Indian Hills Country Club, in Mission Hills.

“Generally, I’ve had more of an optimistic tone in the years past than I do today talking about the investment outlook,” said the New York City-based Zirin. “We’re going to see a little more volatility going forward.”

But that volatility shouldn’t equate to a recession as early as next year. GDP growth, which increased 2.9 percent last year, is expected to come out at 2.3 percent in 2019 and 1.2 percent in 2020, which means we will still see growth, just at a slower pace. Corporate profit growth is also stalling because “capital spending has slowed because of the uncertainty around the trade policy,” Zirin said, as companies wait to see if a deal can be reached between the United States and China, or if a trade standoff will last through the presidential election.

Consumer spending might be a more important aspect of how the economy performs, though, and with low unemployment, inflation and interest rates, and a decrease in overall debt loads, there aren’t any major worries in that arena as long as those fundamentals hold up.

Speaking about specific industries, Zirin said that UBS favorably views communications and companies catering to U.S. consumer staple and discretionary spending. There is more concern about industrial companies, technology and energy firms due to their reliance on the health of the global economy.