The difference between companies that succeed and those that don’t is a simple matter of putting the focus right where it belongs—on the customer.

Those who say service isn’t what it used to be are exactly right. It is much better in every which way—speed, efficiency, even congeniality. I knew for sure that the service revolution had successfully swept America when it broke through the barricades of that last redoubt of 19th-century sluggishness—the DMV.

OK, next to last. There is still the post office.

My recent sortie into the service economy began in September, when I bought a new car, a Ford Escape to be precise, at Rob Sight Ford. On a customer-evaluation form, I gave the experience a 9 out of 10, but you expect that kind of service when you’re plunking down enough money to feed a family of starving Djiboutians for about two centuries.

That said, the whole happy experience took less than two hours, and I spent half that time off loading
the treasure trove of junk in my trunk into a dumpster conveniently provided by the dealership.

A week or two later, I made the felicitous executive decision to register my car not in Downtown Kansas City, but in Grandview. I have lived here long enough to absorb the Midwestern aversion to paid parking. Indeed, I have friends who would pay for sex or palm readings before they would pay to park. 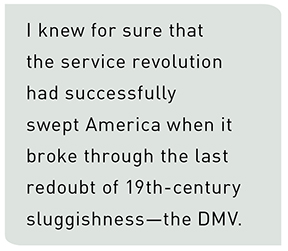 I found a free spot about 30 feet from the building door, walked through the bright, airy lobby, and easily found my way to the DMV office. In front, there was a number wheel—an innovation borrowed from the meat-cutting industry—and I pulled off number 60. The electric signboard proclaimed that client 59 was being served.

Before I could sit down, a young woman called my number. I walked over and started sorting through the various papers I brought with me. “I’ll do that,” she said helpfully. I handed her the file, and she briskly separated the wheat from the chaff. In no time, I had my registration, and she had my check.

“Excellent service,” I said. “I’m never going back Downtown again.” She looked up and smiled. “Oh no!,” she said. “Never go Downtown.” I walked back to my car and checked the time. I had parked eight minutes earlier.

The car-service saga should have ended here, but it was only just beginning. Like most people, I drive a new car the way a Secret Service agent drives the president. Lurking behind every red light and stop sign, I envision a would-be assassin.

This one sneaked up on me. Disguised as a little old lady in a Mini-Cooper, driving benignly down State Line Road, she abruptly crossed over from Kansas into Missouri and cut right in front of me. I braked and skidded into her.

“Man,” I said in exasperation when I got out, “this car is only three weeks old.” Hers wasn’t much older, and it confirmed the adage that when a Mini-Cooper and an SUV collide, the Mini loses. “That’s not fair,” she said, looking at the difference in damage, but she was willing to accept responsibility and was obviously rattled.

Plus, she had Kansas plates. That was a good sign, and she was insured, which was even better. The last time someone hit me it was on Cleaver Boulevard. I know. Enough said. If I generalize about this incident, my editors will start sweating—and editing.

What follows will read like an ad for State Farm Insurance, her insurer. I think their execs learned a long time ago that the average person is eager to talk about a car accident in which he or she was the innocent party. So why not make State Farm the hero of that story.

Here is what State Farm did right: Everyone who spoke to me was bright, efficient, and helpful. Better yet, they all spoke unaccented English. This should not matter, but it does. 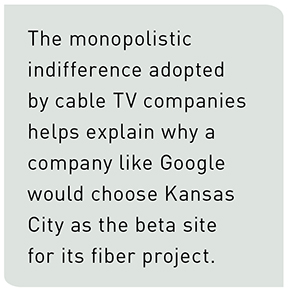 Although the cable company cited above was out of town, Time Warner in this area does not do much better. Long ago, it made the mistake of adopting the post office model of monopolistic indifference, which helps explain why Google chose Kansas City as its beta site.

The second thing State Farm did well was adapt its standard service model to my needs. The easiest thing for State Farm was for me to take the car to the nearest authorized assessment and repair center. That, however, was a Chrysler dealership. I wanted to use Ford. State Farm obliged by sending an assessor to me.

A cheerful young guy came to my office, crawled under the car and accounted for every nick and bump. He then retreated to his truck and returned 10 minutes later with a highly detailed, printed-out estimate, which I took to Ford.

State Farm has an arrangement with Hertz, but Rob Sight has an Enterprise rental office on site, another useful service innovation. State Farm obliged me again by letting me use Enterprise. By the time my car was ready, the check from State Farm had already arrived.

I took the check to the Rob Sight Collision Center (I like that name), dropped it off with the keys to the rental car, and drove away in my freshly repaired (and washed) Escape.

Reflecting on this experience, I wondered what would have happened if the administration had chosen to take over car insurance the way it did health insurance. Something tells me I would still be squabbling, not with the insurer, but with an IRS agent. Maybe even from the Philippines.