Whether it’s through ample access to interstate and state highways and rail lines, or by air or water, Kansas City moves people and freight.

You wouldn’t think it to look at KC on a map of the country, but yes, Kansas City is a port city. The two rivers that meet here, the waterways that gave rise to this place by virtue of being the interstates of the early 19th century, form a river corridor that connects this part of the world with the rest of it, via the Missouri River, the Mississippi and the Gulf of Mexico. 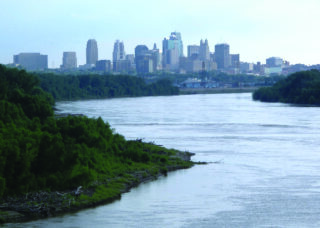 River City | Though hundreds of miles from the nearest ocean port, Kansas City is able to ship cargo via the Missouri river, on to the Mississippi and eventually reach the Gulf of Mexico and foreign destinations.

But that’s not the only way to get there from here.

Kansas City’s well-known interstate access for years came through its connections to I-35, I-70 and I-29, all vital cogs in the national wheel of commerce. They span the nation east to west, bisect it north to south, and give this region access to the Northern Great Plains states, as well as, eventually, the Great Lakes and Mexico.  In recent years, the addition of I-49 to the nation’s interstate grid has positioned this region with access to the Gulf of Mexico by overland freight, complementing that reach by water.

That puts KC in some elite company as a transportation center, with the likes of New York, Dallas and Chicago.

Over the past half-decade, those assets and the presence of major rail lines running through this region have given Kansas City a new cachet in corporate discussions about where to build national, even international, distribution facilities.

And as our history has shown, when our transportation facilities expand, the region benefits, as well.

Water-borne commerce gave the city its start, thanks to the confluence of the Kansas and Missouri Rivers, which meet just west of Downtown. And the Missouri continues to play a strategic role for agricultural commerce.

As the city developed—and the locomotive evolved—the region took on new shipping importance in the late 19th century. That connection, in fact, made steak dinners in New York possible, thanks to refrigerated rail cars coming out of the Kansas City stockyards.

Even today, long after the stockyards have closed here, Kansas City remains the second-largest rail center in the country, and No. 1 overall in terms of rail tonnage shipped every year. The region is served by both BNSF and Union Pacific, linking to the networks that reach to ports on the West Cost, intermountain metro areas that include Denver and Salt Lake City, the Great Lakes region, with Chicago, Milwaukee and Minneapolis, and Dallas and Houston on the way to the Gulf of Mexico.

Kansas City Southern Railway provides a direct rail line not just to the Gulf, but through Mexico thanks to its Kansas City Southern de Mexico subsidiary, with rail links into countries throughout Central America. The company also owns a 50-percent share of the Panama Canal Railway Co., connecting rail traffic for ocean-bound shipping to either the Atlantic or Pacific.

And, finally, there is air transportation. Kansas City International airport, moves more air cargo each year than any other airport within a six-state area. Of course, it’s the premier passenger-traffic destination in the region, and the City has resumed discussions about a billion-dollar makeover to convert its 45-year-old, three-terminal design into a consolidated, one-terminal operation.

Relieving some of the passenger traffic congestion at KCI are the Max B. Fisher Skyhaven Airport in Warrensburg, operated by the University of Central Missouri, which is the second-busiest airport in the region. Charles B. Wheeler Downtown Airport serves the heart of the metro area and is adjacent to the commercial core of the region, while Executive Airport serves much the same function in the other half of the region’s commercial base in Johnson County, on the Kansas side. And an hour’s drive away, or less, are additional airports in Topeka and St. Joseph.