Business owners looking to sell in the near term need to understand the challenge they’ll face putting their company’s affairs in order. 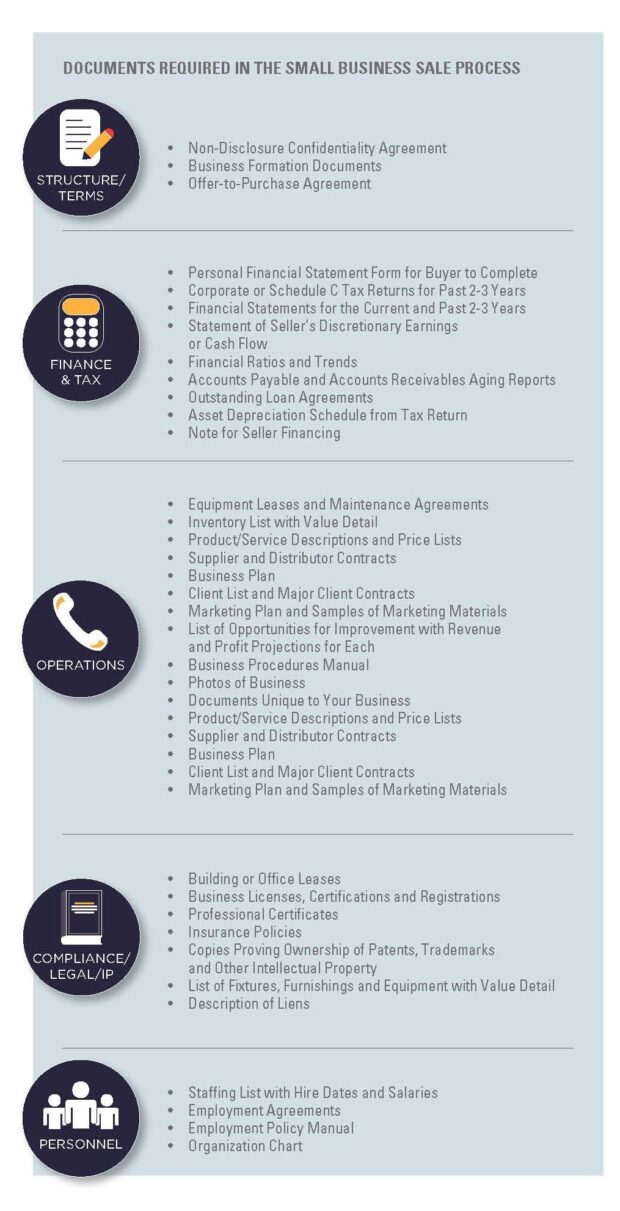 For business owners planning to sell their companies in the near term, a storm may be brewing.

“Every small business owner knows what GAAP means, but a lot of them still don’t do things according to GAAP” — Lisa Epps, Creative Planning

In broad terms, say professional-services executives, buyers will be looking for historical and current documenta-tion in categories that can be broken down into finances, taxes, operations, compliance, personnel and intellectual property. There are others, but those will generally be the prime needs. Too often, small business executives who have been focused on growing their companies and the day-to-day needs aren’t current across the board.

Anyone who plans on selling in the next couple of years must understand what’s coming down the road and start preparing now. “There needs to be a certain level of organization,” said John Shoemaker, a senior manager for CBIZ in Kansas City. “All those are going to apply to almost every transaction. When that happens, where we see things go off the rails, is when you have an unprepared seller who gets all these due-diligence requests from a buyer, and they are immediately overwhelmed. They can’t devote the appropriate attention to any one of those needs.”

Too often, business owners offer-ing unsatisfactory responses to buyer questions will only generate more ques- tions—and too many questions soon turn into red flags. If appropriate tho-ught hasn’t gone into documentation prep, it has a snowball effect. “Put yourself in the buyer’s shoes,” Shoemaker says. “Getting information that is often prepared late, is incomplete—that doesn’t inspire a lot of confidence. It often turns into a buyer digging in even more.” With that compounding effect, he says, “people forget why they got into bed with each other to begin with. That’s where it really goes sideways.”

It’s important, as well, to understand that the type of business being sold will shape a buyer’s documentation needs. Businesses of different sizes, or coming from different sectors, are going to get different due-diligence requests.

“If you’re a manufacturer, people will be all over your environmental records; if you’re in software, they’ll want to know about your tech staff and IP protections,” said Ed Wilson, a partner at Husch Blackwell. “What’s universal to all, typically, is how you own your assets and IP, do you have good title and can you show it.”

Another aspect, he said, typically with employees, covers non-disclosure agreements: “Are people restricted in some respect from leaving and trying to steal all your employees, or take your se-cret sauce and going to a competitor?” Missteps can entail the most funda-mental of questions, Wilson said. “You’d be shocked, especially among smaller companies, how often people can’t even document who owns their companies. It might be a cousin who claims you prom-ised him 2 percent a year ago, but you didn’t document it,” he said. “Or maybe you told an employee you’d give them 5 percent if they stayed on board.”

Too often, Wilson said, inaccuracies or incompleteness require additional time to address—time that could be spent on ensuring the business is operating at its best. Without that, an owner is putting the company’s valuation in peril. Lisa Epps, a lawyer specializing in tax issues for Creative Planning, not-ed that many buyers—especially larger ones—are looking for financial state-ments from at least three, and possibly five years, all compiled using Generally Accepted Accounting Principles.

Believe it or not, that can be an issue.

“Every small business owner knows what GAAP means, but a lot of them still don’t do things according to GAAP,” Epps said. Use of those principles is in-tended to bring some discipline to the process; in most cases, Epps said, “the buyer wants things to be stated as broad-ly as possible; the seller wants them as specific as possible.”

Patrick Respeliers, a partner at Stinson LLP, said some of the issues on fi-nancials stem from smaller companies’ use of less sophisticated accounting pro-cesses. Reliance on off-the-shelf bookkeeping software usually won’t be enough when it’s time for due-diligence requests.

“A lot of smaller firms don’t have audited statements,” he said. “Depending on the relative size between a public company that may be buying, there may be a requirement to file audited finan-cials with SEC. In those situations, a buyer is going to insist on audited financial statements.” All of this, these professionals say, can add up to unanticipated costs for sellers. They will need to plan not just for the time to gather documents, but for the expense of generating them.

With taxes in particular, says Sean Haggerty of CBIZ, much is riding on the structure of sale. By purchasing a company’s assets, a buyer is absorbing elements of a company into its own. That’s different, in tax terms, from buying the equity. In the latter case, he said, “you inherit what the seller was doing historically” and are responsible for tax consequenc-es of prior years. Hence the heightened diligence. Given that, Haggerty said, there are no valid reasons for not having tax doc-umentation buttoned up if you plan to sell your company. “I’d be very skeptical of companies if they aren’t meeting their filing requirements,” he said.

In sum, Haggerty said, if your docu-mentation isn’t buttoned down, “now you’re talking a lot more time and ex-pense for sellers. People are surprised, once you get lawyers, accountants, investment bankers and others at the table with billable hours, and their eyes get wide open looking at the costs to do this. The more sophisticated understand that it’s just the cost of doing business. Some will balk at the cost and try to do it all on their own. The problem is that a cost-efficient route may save expenses, but you also get what you pay for, so you may end up reducing the value of the business by more than the expenses you’ve saved.”