The Start of Something BIG? 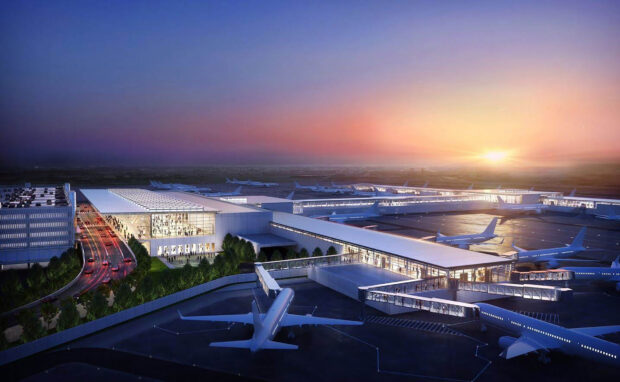 Is a new KCI terminal a true game-changer, or just table stakes to compete with other cities? Construction executives weigh in.

It’s not often you find two dozen executives from the construction world and related disciplines gathered in one venue. So when the 2020 Construction Industry Outlook assembly unfolded in December, there was a rare opportunity to glean their insights into the potential economic benefits of a new single-terminal configuration at Kansas City International Airport.

With Terminal A at Kansas City International Airport now just a piece of the region’s memory and foundation work proceeding apace, assembly co-chair Steve Hancock of U.S. Engineering asked whether his peers anticipated a regional growth engine emerging when the project is completed in early 2023.

“Having a welcoming front door will benefit our region—I think it’s huge,” said Peter Browne of Kissick Construction. “We’re now inviting people who come here through the garage, not the front door. It will be one more thing in the toolbox to sell Kansas City.”

A new airport, said Randy Bredar, is not simply a different way to get into and out of this region. “It’s quality-of-life issue,” he said. With perspective from his board service with the Kansas City Sports Commission, he said, “last year was amazing to go down the list at the end of  year and see the tournaments and events we didn’t get. And the No. 1 piece of information on the debriefs we received said “We don’t want to drag all of our people through that lousy airport.’ One of them even said it might be the best Third-World airport in the United States.”

Co-chair Steve Levy said the team at McCownGordon Construction remains curious about the possible transformative effects of the airport, and wondered about other lines of emerging commerce from it, particularly with cargo shipments. It would be a significant layering opportunity, given that rail has driven much of the logistics growth regionally. Can air cargo yield the same outcome? “Amazon doesn’t ship by rail, and we are becoming more of an Amazon-type society,” he said.

A recent transplant from Texas, Levy said Dallas-Forth Worth International Airport had been able to leverage air logistics growth to great effect, leading to construction of million-square-foot warehouses, he said.

Can that happen here? Perhaps, mused JE Dunn Construction’s Paul Neidlein, but “if you look at the terminal itself, it’s more of an ante into the game of what peer cities are doing. We’re so far behind, we’re just getting up to speed, so I don’t see any benefit besides not having any negative comments when someone comes to KC and says our airport is bad.

A greater impact regionally, he said, might unfold if a new airport in 2023 were followed by a major construction initiative like a Downtown baseball stadium. That could create enough momentum in the construction sector to help carry the region through an economic downturn, which many are anticipating as the longest recovery in the nation’s history enters an 11th year.

Turner Construction’s Zach Loy suggested that the region would benefit from more direct flights and the ability to attract more international companies. “Maybe we’ll get a lot of development spurred around the airport,” he said. “We’ll see if that can be a way for us to help bridge the gap whenever a correction does come.” 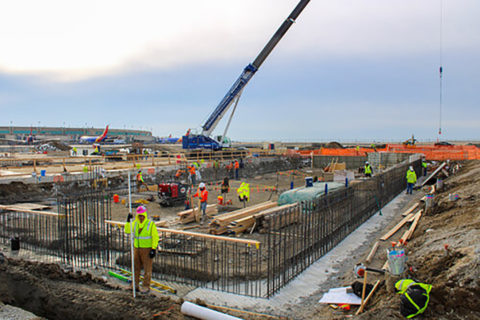 Out With the Old: Demolition of Terminal A at KCI in 2019 cleared the way for work to begin on the thousands of pilings and concrete needed to support the new terminal superstructure.

EPC Real Estate’s Mike McKeen, who had been on the mayor’s airport advisory board, and has a parochial interest of his own as a Northland resident, isn’t so sure. “I would love to see that development, but I don’t understand how a new airport or even more direct flights will influence a whole lot of office or a whole lot of other investment.” Of the companies his firm speaks with, he says, none are basing  decisions about their presence here solely on the airport. It might help draw national political conventions, he said, with financial impact likely limited to the commercial center of the city. “I don’t see it having a big impact on real estate itself, unless they can get big cargo planes to help on the industrial side of things.”

Another consideration will be the public response to navigating the new facility; opposition to it for years was grounded in fears that KCI’s fabled convenience would be lost.

That doesn’t wash with Randy Bredar, who pointed out how security processes have altered every airport’s accessibility over the past generation. “Before 9/11,” he said, “it was so great to leave my house in Brookside at be at the gate in 45 minutes.” Those days, he said, are gone.

His Dunn colleague, Paul Neidlein, sees the sacrifice as marginal:  “I’ll happily walk a couple hundred extra yards to have a real drink and a real sandwich,” he said. “A little exercise won’t hurt anybody.”

Steve Hancock cited one news reporter’s efforts to quantify the KCI difference, visiting other airports and putting a stopwatch to the parking-to-
gate requirements. The verdict? KCI was saving people only about two minutes. “As soon as somebody gets off a plane or into that terminal for the first time,”
he said, “none of that is going to matter. It will be a beautiful facility.”

Marsha Hoffman of SFS Architecture said that many people overlook the time required to pick up their luggage upon arrival, and McCownGordon’s Emily Tilgner pointed out the other half of convenience: the potential for more direct flights. “Instead of trying to rush it each and every time,” Tilgner said, “I would walk a little longer through the airport if I can get to my destination city faster.”

When Rick Oddo of Oddo Development quipped that a new airport could be leveraged with a Downtown baseball stadium to drive regional growth, Terracon’s David Harwood pointed out what that might entail for broader economic development: “It gets into the whole public transportation issue,” he said. “To build a dynamic city, if we have a great airport, if we have a vibrant Downtown, how do you build the transportation and housing to support that?”

That, he said, is what the younger generation—and even some among older generations—are really looking for, especially among those who place a premium on convenience. “I lived in Denver for 11 years, and it was fabulous to get on a train to Downtown for a Rockies game or dinner and not have to worry about finding parking for events like that,” Harwood said. In the minds of those who don’t know what this region has to offer, he said, “those are the things that over time  will continue to transform Kansas City into the world-class city we know it is.”