As more workplaces turn to new kinds of automation, colleges add programs to produce a new kind of blue-collar employee. 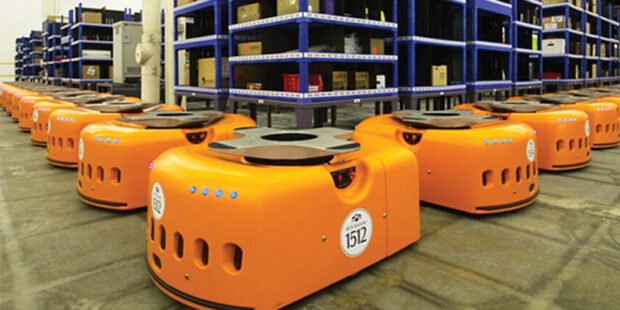 Managing the Machines | Robots like these at Amazon fulfillment centers are changing the numbers of humans needed for those tasks, but are also creating new jobs requiring a human touch for maintenance and repair.

When a work-force development professional talks about game-changing trends in that field, this should give you an idea of what’s really going on:

The common thread underlying each of those bullet points? Technology. And the need for workers with not just tech skill sets, but adaptable and expandable skills sets, stands as one of this region’s greatest work-force challenges, say educators and business execs alike.

So where will those new workers come from?

Most immediately, you can look to the ranks of community colleges. Already, the three regional pillars of associates-degree-granting programs are pivoting to embrace artificial intelligence, robotics design and maintenance, and data science as core elements for development of the next generation of workers. And it’s not going to be one-and-done with degree or certification attainment. Education, even at the undergraduate level, is becoming a lifelong process as the underlying technologies change.

“You have to keep up with the technology because it changes so fast,” says Lou Tobin, program coordinator for industrial maintenance at Metropolitan Community College. “That’s reflected at this campus—you have to keep the work force viable, and we try to do that.”

Assisting him in that effort is a small cadre of industrial robots—four of them made by Fanuc, one by Mitsubishi—that teach students the fundamentals that will keep machines running.

“The Fanuc has a camera on it, so if something is coming down a conveyer, it can observe, see if it’s setting the figure or piece perfectly every time,” he said, and if not, correcting it is likely to require a human component. “Where you see this is at Ford, GM and tier-1 auto suppliers,” Tobin said. Early-stage robotic were simpler, with rote actions, but tech advances are injecting mobility and ambiguous movement into the process. Robots, he said, “used to do a specific task, and they required big modification to do something else. Today, a robot does much more, without much modification.”

But as anyone with a bad TV remote knows, tech doesn’t always live up to its promise without corrective action. That’s where the human factor comes into play, with skills like those being developed at Johnson County Community College.

Students there can also secure an associate’s degree in electronics technology, with classes that teach trouble-shooting with industrial robotics, programming of robotic control software, and management of laser systems and applications.

But it’s not all about manufacturing and number-crunching; there’s also an associate’s in game development. That will qualify today’s late-end Millennial for roles as game programmers, tool builders, collision-detection developers, engine builders, interface programmers and video/online training developers, among others.

Conventional wisdom holds that manufacturing is a dying field in the U.S., but conventional wisdom is wrong, Tobin said. “In the last 10-15 years, manufacturing is up 40-50 percent in this country,” he said, “but the number of people needed for that is probably down 40 percent. The problem is, for every 12 who lose a job to automation, only one person is hired with the skills to maintain that equipment.”

The real challenge, he said, is getting kids into the program in the first place. Most who do so now are working in production settings somewhere and see opportunities on the maintenance side. But reaching high school students, he said, “that’s an area we struggle with.”

The blue-collar bugaboo—high school counseling programs that push disproportionate numbers of students to four-year college tracks, even if they lack the aptitude for careers that require degrees—continues to be a barrier, he said.

But it shouldn’t be.

“For the last 20 years, we’ve told students that manufacturing was done, and that if you want success, you have to get a four-year degree,” Tobin said. “But they don’t specify what kind of a college degree you really need, and a lot of folks get that degree but they have no job because the college degree doesn’t apply to anything.”

Industrial maintenance is among the harder programs to fill, but the first year MCC offered it, the graduating students all found jobs making $29 an hour or better, Tobin said. Not only did they come out of school without significant debt, they were gaining two key years of vital earning power. The challenge, he said, “is figuring out how to recruit those students and let them know that a four-year degree is not their only option.”