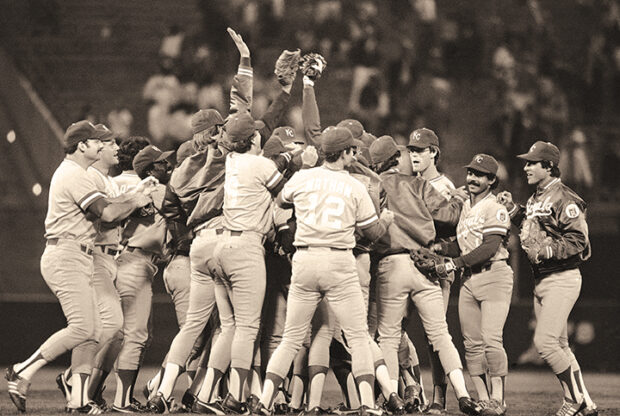 As the Royals press to repeat the glory of 1985, their winning ways are shining a bright light on the Kansas City region itself.

It’s not exactly parallel to the description that “It’s a Wonderful Life” provided about the provenance of angels’ wings, but it’s safe to say that every time the Kansas City Royals win, a chicken loses its own. Lots of ’em do. At Hooters, at Johnny’s Tavern, at Tanner’s Bar & Grill or any of about a hundred other sports bars and restaurants in Kansas City.

With bats cracking and fastballs snapping at Kauffman Stadium, the business of Baseball 2015 has been booming in this region, and not just at One Royal Way in the Truman Sports Complex. To be sure, the Royals bagged far more ticket, parking and concession revenue from the 2.7 million people who caught a game at the K this year—regular-season attendance was up an impressive 38.44 percent over the 2014 season.

But as the hometown team streaked to a second straight American League Championship Series, things have been very, very good for businesses aligned with America’s pastime: bars, sportswear outlets, ticket suppliers—even the offices of Visit KC, the city’s public face of its Convention and Visitors Association. But there’s more to the business benefits than game-day transactions.

For Ronnie Burt, president and CEO of the convention and tourism office Visit KC, the ability of Kansas City to present itself on a national stage was huge. Regional sports telecasts might draw 3.5 million viewers, he estimated, but a nationally televised playoff series can attract the eyeballs of more than 50 million nationally.

“There’s no question about it,” he said. “When you look at last year’s exciting playoff run, all of the national media attention and exposure we got—we could never have purchased that type of marketing exposure. It was magnetic.”

Economic impact from these games is hard to measure, he said, but he’s confident that with the additional sales at the stadium through the added games of postseason, the additional wages paid to sports complex employees and those working in entertainment venues, and the sales of team merchandise, the impact is double-digit millions.

And that’s from a traditional playoff matchup of U.S. teams. The American League Championship Series with the Toronto Blue Jays, he said, gives the city a chance to shine with an international audience.

“Last year, Kansas City was really generating an awareness about the region because we hadn’t been in post-season play,” Burt said. “What’s nice this year is we have Toronto coming in, so now have Canadians and international visitors who haven’t come to Kansas City before.” And those people are adding to the receipts by dining here, staying in hotels and doing the full tourist thing.

At Tickets for Less in Overland Park, Jason Durbin knows a bit about the Royal Effect. He’s the sales manager there, and his five-year tenure with the company gives him a perspective that dates to the 2011 season, when the Royals finished fourth in the American League Central Division, 20 games under .500 at 71-91.

“It’s a lot busier,” says Durbin. “We’ve had to grow quite a bit. Going into last year, we staffed up for the post-season, but nobody could have expected the run the Royals would make and how crazy the city was going to go.”

This year, with even more staff on board, “it’s a hectic time,” Durbin said the day after Kansas City’s Game 5 win over Houston in the division series. “But it’s good, we’re all from Kansas City, so even if it’s crazy at work, at the end of the day, we get to go home and watch the Royals.”

Local companies have long aligned with the Royals for promotional collaboration, and those that have been with the team for the long haul have seen a dividend on that loyalty. One of those is Boulevard Brewing Co. Jeremy Ragonese, director of marketing there, said a nearly 20-year affiliation with the Royals had helped the brewery rise from startup in 1989 to become the second-largest in the state.

“There are multiple facets to the relationship we have with the Royals,” he said. “First, the simple aspect of people merely having access to our beers at the stadium. It’s where a lot of people who came to the region to enjoy a Royals game were first exposed to our beers.”

As the brewery grew, it had more resources to expand its marketing efforts. This year, for example, it’s part of the Craft and Draft space, with Boulevard as a key sponsor.

“For that extended period we had an unofficial relationship, people saw we were big supporters of the team, even when they were not doing so well,” Ragonese said.

“We had grown to become synonymous with hometown pride. That has paid dividends in the last couple of years as we’ve seen the team perform on the field.”

The Drought Is Over

Thirty. Ponder the number for a moment.

It has a special significance in mathematics (as a square pyramidal number), in Biblical terms (especially for Joseph, Saul, David and Jesus when they reached that age), in Western music (total number of major and minor keys), and in existentialism (Albert Camus defined it as point where humans begin to fully appreciate the meaning of time).

Ahhh: Time. The number, this year, has a particular significance to Royals fans as well, since 2015 marks 30 years since the magical run to baseball’s pinnacle. Of coming back from being down three games to one in the AL championship series, then doing it again to win the World Series in seven games. It evokes memories of Howser and Herzog, of Brett, McRea and The Quis, of Orta, Denkinger and The Call in Game Six.

So in that sense, it has a special meaning to baseball fans in St. Louis, too, but from an entirely different perspective.

With a second-place finish in the AL Central last year, 30 years would pass between the time of that West Division championship in ’85 and this year’s division title, secured by virtue of the league’s best record, 95-67. and as of this wtiting, the Royals sit 2-0 in the ALCS. Doesn’t that sound great? “Second straight AL Championship.” Has a nice ring to it.

The Long Road Back

With the dust settling on this season, it’s worth taking stock of how far the Royals have come recently—and how long the journey leading up to that recent success has been.

When it comes to professional baseball, we know what’s happening with the local team, and perhaps with the division. Without being in a position to win the division, most fans find little excitement about what’s going on in other divisions or the other league—it’s almost irrelevant. At least until the ALCS champion-ship series with Toronto this year.

So the measure of joy that Royals fans have experienced the past two seasons may be a reflection of what’s happened in the 28 others since 1995: Seasons that generated just four second-place finishes, eight third-place finishes, six fourth-place finishes, nine!—fifth-place finishes. And a pair of back-to-back sixth-place seasons in 1990-91. Thank goodness for the divisional realignment in 1994—there’s no further low in the American League Central than fifth place.

Of the 26 teams that have played each of those seasons (four expansion teams started in the 1990s), Kansas City is dead last in win totals, with 2,212—that’s 485 wins behind the No. 1 New York Yankees. And for perspective, the Royals three-decade average of roughly 75-87 is only five games better than the Cardinals’ worst season in that stretch, 70-92 in 1990. (Perhaps that accounts for some of the baseball envy on this side of the Show-Me State.)

But “bad” is a relative term when it comes to baseball, and the Royals by no means suffered alone during those long years. Six other teams experienced worse win-loss bottoms during those years than the Royals did, and fans here have never had to endure the psychic shock of a 2003 Detroit Tigers season, which produced baseball’s worst in the past 30 years: 43-119, a horrific .265 winning percentage.

And nine other teams had aggregate win totals that, viewed across the decades, were only five games better per year than Kansas City’s average season. As with the Kansas City economy in general, even though our highs haven’t been as high as other cities have experienced, neither have our lows been as low as theirs.

A Bounce in Our Step

But enough of what was. Kansas City fans are lasered in on what is, and that’s winning baseball, a product of on-field successes like aggressive base-running and solid pitching, and off-field successes to turn up strong contributors through free agency.

All of that translates into wins, and wins have a way of lifting the spirits of an entire community. Burt cited the Game 4 experience with the Astros as an example of how an entire community can have its Zen lifted by on-field success.

“They were down 6-2 and the excitement generated with that comeback translates into how exciting Kansas City is, the fans, the energy throughout the city,” he said. “When you have an exicting win, and one like that, where the whole country is watching, passions starts to bubble from the inside. These stores can’t keep Royals gear on the shelves.”

The crowds continue to grow at watch parties in the Power & Light District, he said, “and it’s exciting to see a team motivating the whole city to adopt that spirit of a winning city. The city has more pep in its step.”

And the team, he said, helps the city embrace a powerful sales message: “When you never quit, anything is possible.”