Incremental increases in use of telehealth turned into an on-line explosion in the COVID-19 era, with long-term implications for providers, insurers, patients and employers. 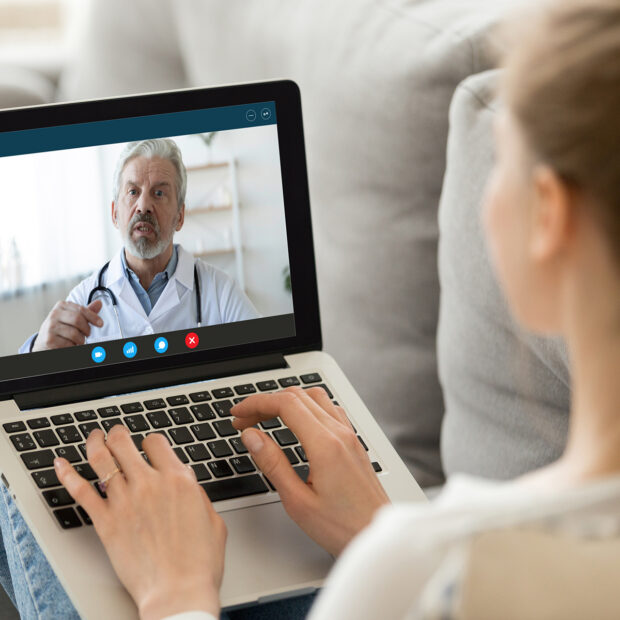 When the dust settles from the public-health storm of 2020, the one aspect of health care that could produce the most significant, lasting change for providers, insurers, employers and patients might well be advances in telemedicine.

Telemedicine “is something that was nice to have, but now it’s almost something you have to have.” — Jeff Spencer, senior vice president, Employee Benefits, Holmes Murphy & Associates

Across the nation—the developed world, really—hospitals pivoted quickly to address concerns about a potentially deadly virus, before they even understood the true scope of the threat. One way to do that was to focus on reducing patient volumes. Some of that came by delaying elective surgery, to free up space for an expected wave of COVID-19 casualties. But a big chunk came from keeping people connected to their physicians and other providers through telemedicine.

It’s hard to overstate the profound level of that change. Some hospitals say they have advanced their schedule for telemedicine adoption by a decade or more.

“Pre-COVID, almost every medical carrier we work with had embedded telemedicine in their offerings,” says Jeff Spencer, senior vice president for Holmes Murphy & Associates, the insurance brokerage and benefits consultancy. “Once everything hit with the pandemic, we saw a huge uptick in utilization. Our anticipation is that, like everything else during this pandemic, this is something that was nice to have, but now it’s almost something you have to have.”

That’s the view from the insurance side, as well. “COVID-19 changed the virtual care landscape for both providers and patients, essentially all at once,” said Tim O’Brien, vice president and executive director of care delivery for Blue Cross and Blue Shield of Kansas City. “In an industry that usually experiences change slowly, the quick pivot to virtual care has been remarkable.”

And remarkably rewarding for investors in companies that produce telehealth systems. Shares of publicly traded Teledoc Health, for example, have gone from about $80 last December to $202 this month. Those who rely on this innovation can’t expect to see that kind of ROI, but there are savings to be realized through telecare.

“It varies by carrier; on the main, a telehealth visit is going to cost less than going to urgent care, and much less than the emergency room,” Spencer said. “Generally, it’s about the same and potentially less than the cost of an office co-pay. You can even structure plans to zero co-pay if you want to incent more people to go that route. Most people don’t understand their health plan until they use it, but the overall expense of that transaction is lower than the usual way of doing things in-person.”

About the time the confetti was being swept up from Kansas City’s Super Bowl victory party, reports began to surface of COVID-19 cases in the Midwest. The coming crisis would cast a bright spotlight on the University of Kansas Center for Telemedicine & Telehealth.

The center began in 1991 with a single connection to western Kansas, and saw significant growth over the next three decades. But nothing like what it was about to experience.

“The crisis has reinforced the way we have done business since the creation of the Public Authority in 1998—focusing on excellence in quality and service delivered by the most competent and committed staff,” said Bob Page, CEO at the University of Kansas Health System. And telemedicine was a significant part of that change. “While other organizations have struggled to bring patients back, we have successfully implemented telehealth and expanded our reach locally and regionally,” Page said.

The health system’s Kansas City market president, Tammy Peterman, said “we have learned to operate at a very different speed—because we had to.” And the metrics on telemedicine attest to that. Last year, the systemwide count of telemedicine was just 848. This year? It absolutely exploded to 171,035—more than 200 times the 2019 tally.

At Blue KC, said O’Brien, “we saw an increase in Virtual Care visits through the Blue KC app of almost 600 percent in one month earlier this year. … The increased engagement that has occurred as a result of COVID-19 has pushed our long-term plan for virtual care into high gear. Over the last eight months, we’ve accomplished what we thought would take three years. The future we were planning for has quickly become where we are now.”

The move to telemedicine will be one of many innovations that will come out of this year’s pandemic.

“While COVID-19 has certainly caused tremendous damage to our economy and we’ve lost far too many lives, I think we can find comfort in the change that we’ll see—the innovation in how patients receive better, faster, more convenient care,” said Melinda Estes, CEO for Saint Luke’s Health System. “More and more, patients will be able to connect with their care providers more easily, and technology will continue to drive health care that more seamlessly fits into people’s lives.”

That innovation, says AdventHealth Shawnee Mission CEO Sam Huenegardt, will be a silver lining to this year’s health crisis. “Health care isn’t known as a nimble industry,” he said, “but we’ve adapted quickly to offer virtual care and keep up with constantly changing recommendations for caring for COVID patients and preventing further spread.”

The next step for telemedicine, executives say, could be in the mental-health space.

Web platforms like TalkSpace and Calm are already making a splash in those waters, said Spencer, but other approaches are coming into use. “Some look more like a traditional EAP that you can access on line and interactively, so you can do it at home rather than sit with a counselor face to face in a traditional EAP environment,” he said. “I think that’s going to be the next step.”

O’Brien said he’s hopeful that telemedicine can break through the barriers that discourage people from accessing the health-care system until there’s a crisis. By some estimates, 25 percent of the U.S. population has no primary-care physician, a dynamic that drives up costs.

“Telemedicine and virtual care are designed to enhance patient-centered health care, increasing access to all types of care, including primary care, and decreasing the stigma surrounding some types of care, such as behavioral health,” O’Brien said. “Anything we can do to increase access and decrease barriers will result in people living healthier, happier lives.”