America’s supply-chain snarl, far from being a coastal shipping phenomenon, is playing out in unexpected ways in the nation’s heartland. 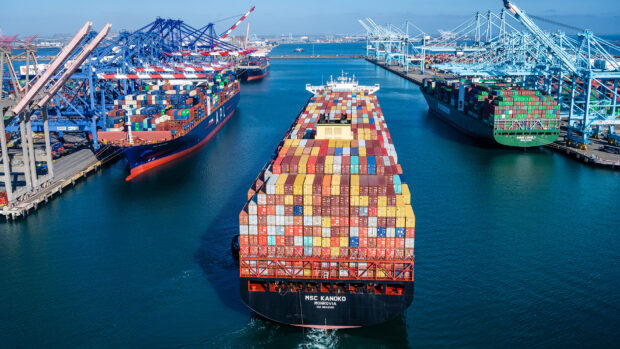 At the dawn of 2020, Damon Anderson and his team at Tallgrass Freight were in a pretty good place. They finished 2019 with revenues nearly half again higher than 2018, and almost seven times the 2017 performance.

Anderson, like many executives, was part of the collective “uh-oh,” as the global pandemic set in and business activity across America shut down late in the first quarter of the new year. But a funny thing happened on the way to financial calamity.

“The first few months, with that lull, all of us were scared,” says the freight-brokerage CEO. “The federal stimulus certainly helped, and when things started moving again, they moved with speed, and they moved with volume. It was a surprise.”

A big one, in fact. From the edge of the abyss, Tallgrass pivoted and capitalized on a transportation crunch, finishing 2020 up 70 percent year over year.

Manufacturers especially have been whacked with shortages of materials needed to keep the lines rolling, especially computer chips. Trucking companies are in the scramble of their lives to hire and retain drivers. Consumers are, in typically un-American fashion, experiencing shortages at retail stores—at times, even shelves empty of products.

The flip side of all that chaos is the strong growth that freight brokers like Tallgrass are seeing.

“We went to an incredible amount of volume; opportunities were coming from everywhere,” Anderson says. He was witnessing a spark that became an inflationary inferno in 2021. Demand for freight services created higher truckload costs and, eventually, higher retail prices. But at the same time, overseas manufacturing shut down by COVID-19 would lead to congested ports and a massive supply-chain snarl.

Layered in yet again were the losses of truck drivers who ignored the call to resume the hard lifestyle found on the road or because of vaccine mandates, further deflating a work force already in crisis.

It all added up to scarcity of trucks and higher prices for shippers when they could be found.

At Dynamic Logistix, a fast-growing transportation logistics and software services provider, CEO Jeff Auslander attributes those factors to a 2021 boom that could thrust the company into the Ingram’s 100 this year, with revenues for the year approaching $150 million. We are living today, he says, with a ripple effect that has yet to subside.

“In July 2020, we saw the first dominoes start to lay down,” Auslander says. “Because of lockdowns, major carriers started letting drivers go. That was a really bad mistake, because there was already a driver shortage. The average age of drivers was 57, a lot of them had diabetes, 87 percent were obese from sitting in the truck all day. Then to furlough over 100,000 drivers—a lot of those are just not coming back.”

The trucking sector has responded with compensation bumps, some of them quite substantial. Mississippi-based KLLM Transport Services made headlines last month by announcing a 33 percent boost in trucker wages. For some on the higher end, that could translate into annual incomes of $150,000.

That may not be enough, Anderson says.

“I remember as a kid, my grandpa taking me on car rides to Springfield, and you’d see trucks with signs saying they pay drivers up to 45 cents a mile,” he said. “It still says 45 cents on some of those trucks.” Too many drivers, he says, are now former drivers because as older ones have retired, younger ones have found they can make pretty good money in a tight labor market with an office job instead of hitting the open road.

“Drivers are the backbone of the industry,” he said. “As brokers, we provide a service, but in the end, it’s the truck driver who does the work. If we don’t value them, we’re gonna have real issues.”

Rates for shippers, as a result of all those pressures, have soared. A five-figure invoice for truck transportation, pre-pandemic, was a rarity generally limited to over-wide, over-sized or special-escort shipments. No longer. It’s routine today on standard truckloads, with the higher costs of those loads priced into manufacturer’s output or showing up on a retailer’s shelves.

Resolution of the supply-chain tangle won’t come soon, executives say, but it can’t last forever. Demand has a way of resolving issues.

“Things have to move, people have to live and get goods, companies have to make money,” Auslander says, “At the end of the day, we’re never getting back to 2018-19 costs, but I think things will return more to normal—not the old normal, but a new normal. Shippers need to consistently look at new, innovative ways to move product, and they all need to go through trucks or rail, but they have to maximize capacity.”