The Challenge… and the Opportunities 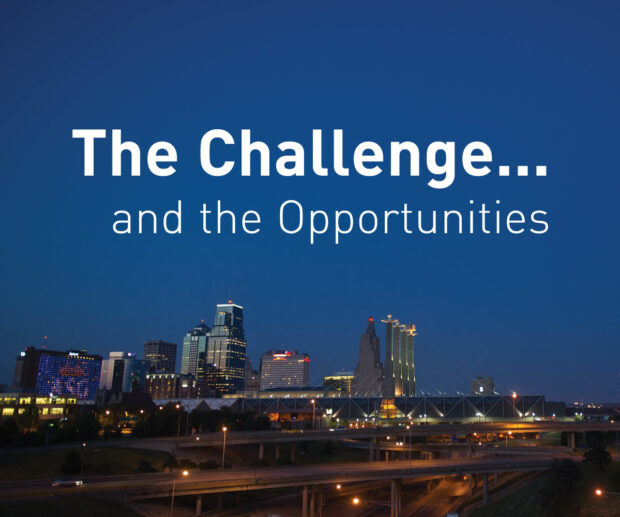 Advocates for a stronger Downtown Kansas City look to the final pieces that will create long-term sustainability. The next big step in that direction will be cracking the office-vacancy rate riddle, but hints of progress are emerging there.

It’s a dynamic that mystifies commercial real estate professionals across Kansas City: After pumping more than $6 billion in public and private financing into an infrastructural overhaul of Downtown, after more than doubling the resident population there, after unveiling a world-class performing arts center and creating a powerful entertainment venue and nightlife draw, Downtown has an office vacancy rate that’s higher today than when the first of those projects started more than a decade ago.

The city wants people to live, play and work Downtown, and while a .667 batting average gets you into the Hall of Fame, it means something’s missing when you talk about complete packages. The critical missing piece is the employment segment, where—again—fewer people are working Downtown today than were employed there in 2000. By some estimates, 20 percent fewer.

Getting them, though, will require resolution of a chicken-and-egg riddle that involves more than one hen. Among multiple factors at work, some are in sync with a goal of a more employer-friendly Downtown, and some are in direct opposition:

And yet, despite the challenges implicit in those factors, Downtown is teeming with optimism for what might transpire over the next decade. There are some very good reasons for that.

The factors that hold promise for solving Downtown’s biggest challenges are both demographic and market-based.

First, the demographics: For all that has been written about the Baby Boom generation and the way it has transformed markets for more than half a century, the Millennials—the Boomer Echo generation—is nearly as big. The two are bookends around a far smaller Generation X, the roughly 50 million people whose oldest members are pushing 50.

Because of their overall disdain for postwar conventions like suburban homes and two-car garages, Millennials have been flocking to the cores of urban areas across the nation—and Kansas City has almost nowhere to go but up with that trend. Census figures show that the numbers of new college graduates younger than 30 increased by 14 percent in Kansas City from 2006–2011—well below the 17 percent national average for metro areas of at least 1 million people. Meanwhile cities within a 600-mile radius of Kansas City, including Denver, Dallas, Chicago, Minneapolis and Milwaukee, saw increases of at least 22 percent, and in Milwaukee’s case, 44 percent.

But we’re poised to join their ranks, many believe.

“We’re seeing a rebirth, and that is attributable to the young people who see the value in living Downtown,” says Joyce Murray of Zimmer Real Estate Services, who specializes in the Downtown office market. “They’re taking up those office buildings that have become functionally obsolete and turning them into residential, and that’s wonderful.” The tradeoff is a win-win, she said, because the parking needs of those conversion projects tend to match up with existing space allocations.

But, as Murray notes, “I have had an office in Downtown for 26 of the 35 years I’ve been in commercial real estate, and I’ve never had a parking issue. You can always find parking.”

Like health care, the real issue with parking is not access, but cost. “That’s why the city has spread out; it’s easier and less expensive to park in suburbs than Downtown,” Murray said. “And our public transportation is not at the point yet where it’s easy to do park and rides to come into the city. We are a lateral city, rather than vertical, but the vertical buildings have their own challenges.”

Citing a speech she’d heard delivered by Jackson County Executive Mike Sanders, Murray noted that cities like Portland or Chicago, with more public transit options, give urban residents a financial leg up, something particularly attractive to the younger crowd. “Did you realize that it costs about $3,500 a year to own a car when you talk about buying, parking, maintenance, buying gasoline? If you move to one of those cities, you can immediately give yourself a $3,500-a-year raise,” she said.

In Kansas City, that won’t be the case for years. Even if the starter streetcar line goes in as planned (at 2.2 miles) and the stirrings of extensions for another 10 miles come to pass, it will constitute a means of conveyance, but not genuinely mass transit. Murray had to look no farther than her own family to see the impact of what we now have: “I have a 21-year-old grandson who takes public transportation from the Plaza to his job in Riverside”—Mapquest distance: 13 miles—“and it takes two hours, and that’s when everything runs on time,” she says. “It’s hard.”

Houts, of Cassidy Turley, says there is indeed a difference in how Downtown can be marketed to businesses. College Boulevard through Leawood and Overland Park won’t soon yield its reputation as a premier business corridor, but, says Houts, “now we can market Downtown to Johnson County; we don’t count people out if they’re in south Kansas City or Johnson County—those are prospects.”

Discussions with tech firms, he said, can be framed around what Downtown offers as quality-of-life considerations for employees. “If you tell them they can move into a cool rehabbed, brick-and-exposed-beams location, that opens up a pool of suburban users,” he said.

The streetcar, he believes, could make a profound impact. “I’m really bullish on it,” Houts said. “I think it will help retail. Along Main Street, the corridor, I think it will have a huge ripple effect” that could prove to be a magnet for new college graduates.

In addition, Houts saw merit in creating new marketing efforts by the city, much the way large companies target young workers with job-recruiting efforts on college campuses. Drawing form KU may be a slam dunk, he said, given that Lawrence is almost an extension of Johnson County, but the Missouri side is a potentially huge target.

“For a college like MU, that could be a huge benefit, because of the battle between St. Louis and Kansas City for that talent,” Houts said. The same with universities in Tulsa, Omaha and Des Moines. “A lot of kids coming out of there are thinking Chicago or Denver or Dallas, so something like that could be an edge.”

Innovation, as well, will help remake Downtown, executives say. Take the case of the 26-story 1102 Grand Building. It was a 70-year-old skyscraper rapidly losing its appeal when a group of investors with a vision stepped in nearly a decade ago with an entirely new mission for it: They turned it into a carrier hotel—a massive data and co-location center, and the only one of its kind in the market.

Darren Bonowitz, who served as CEO of 1102 Grand until its sale to an East Coast company last year, noted that the proximity to the region’s main fiber-optic trunk, combined with the comparatively low electric rates available through Kansas City Power & Light, gave it a nearly unparalleled advantage with its new mission. And the businesses that rely on what 1102 offers, he said, could become a staple for a transformed Downtown.

Another carrier hotel is unlikely, he said, given the potential that 1102 has for expanding the numbers of clients it serves, but “there are certainly opportunities for more of that Downtown” with data centers linked to the carrier hotel. “We have a low kilowatt-hour rate, and that provides exceptional value—the customers we wanted to attract were all about that value. Power is name of game in data centers—it’s power, power, power, just like location is for real estate.”

Dave Scott, chief executive of Avid Communications—and before that, founder of Birch Telecom—also sees potential in Downtown growing its base of knowledge workers. Banks, law firms and pubic-sector employers will almost always be part of the Downtown mix, he said, “but economic development efforts should be focused on attracting companies and individual who have a predilection to live and work Downtown,” he said. “If you want low wages, a massive floorplate and a huge call center, it’s not too good of an environment, but that shouldn’t be our target market anyway.”

Downtown, Scott said, would be well-served to stop swinging for the fences to attract mega-employers, and focus more on the kinds of smaller, vibrant, tech-oriented and creative companies that, he says, are locating here in droves. He runs down a checklist of them, but whether they’re in the design, communications or manufacturing sectors, the trait common to most of them—for now, anyway—is relatively small staffs. But that won’t always be the case. What’s needed, he says, are many, many more of those companies to give Downtown a more diverse business infrastructure.

While the city does have public and quasi-public organizations charged with economic-development efforts, he said, “if you look at the agendas of those ED organizations, they aren’t well-suited to support this type of economic activity. Their incentives are geared at gross numbers of jobs, the kinds of new businesses that make headlines, or where governors like to show up at ribbon-cuttings. These don’t start that way—they are under the radar, they may grow up to be large, or maybe not, but there’s no ribbon cutting, no incentive packages. They’re not geared to go after this segment that is robust and growing.”

The Downtown Council, which he’s connected with, has taken a different tack, Scott said, and is focusing efforts on making the environment Downtown more appealing to knowledge workers—“young people who are smart, working at companies we call the brain-powered businesses.”

Kansas City, he said, has many marquee companies who are Downtown and others with national brands in the region, “but frankly, we haven’t benefited from much of that,” he said. “Our rapidly growing companies that could have done that chose to do something else” by building away from Downtown.

“For someone who owns a 600,000 square-foot office building with a 40 percent vacancy rate who wants to score a 100,000-square-foot lease, this message isn’t very appealing,” Scott said. “But the ones who are interesting to me and make the best corporate citizens are the ones buying up buildings around Downtown, putting down roots, and over the last 20 years, collectively they have created thousands of jobs.

“There’s no reason that can’t continue at a faster pace.”