After MoDOT’s first design rendering drew community criticism, a local firm put forward a new design suggesting a way to preserve and beautify the existing structure. Although MoDOT has opted to continue with its original design, city officials have until next spring, when the structure is removed, to keep the existing bridge.

A strong divide in the Missouri Department of Transportation’s (MoDOT) design plan for the new Buck O’Neil Bridge has members of the community, and some city officials, hoping for a revised design that will allow the bridge to be updated but remain standing. 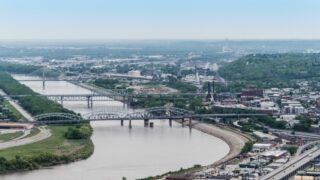 Image courtesy of the Missouri Department of Transportation

Interest in having the new bridge provide direct access from U.S. 169 to Interstate 35 prompted MoDOT to continue with its revealed design, despite some complaints that it would not integrate and connect well with the surrounding community.

“What if…we preserve the existing Buck O’Neil bridge and create an iconic public park to honor his legacy? Sometimes, you just need to see it to believe it…” HOET Landscape Architecture wrote in a tweet.

Earlier in the year, MoDOT selected Massman-Clarkson, A Joint Venture, as the design-build contractor for the estimated $219 million project. The City of Kansas City is providing almost half of the funding.

The current design for the project would add a designated bike and pedestrian lane, providing a 10-foot lane for pedestrian traffic on the eastern bridge structure. As of the construction process, however, some remain concerned with plans that include impending demolition of a section of River Market buildings to make way for the new bridge.

MoDOT said the decided design was determined to be the most cost-effective option based on rail, waterway and wildlife restrictions.

Although no revised plan has yet emerged to replace the existing design, city officials and other members of the community that wish to see an alteration to the design plan have until spring of 2022 when construction on the Buck O’Neil Bridge replacement is expected to begin.