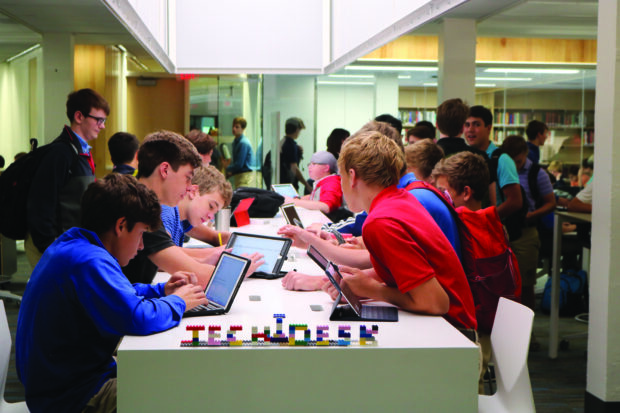 Tech Adventures | The Tech Desk is just one amenity Rockhurst High School uses to connect students with courses in its STEAM program focusing on science, technology, engineering, the arts and mathematics

Last spring, when the nation’s high schools awarded diplomas, they saved a chunk on printing costs: 81,000 fewer students came out of their ranks than in 2016—the fifth straight year of decline. Academic business officers warn that we’re only halfway through a demographic shift that won’t turn before 2023, and even worse, college enrollment nationwide is off 2.4 million—more than 10 percent—since the 2011 peak of 20.4 million.

Taken together, those are sobering numbers for employers looking to restock a labor pool with qualified workers in vital sectors. But there are rays of hope: K-12 initiatives ranging from STEM/STEAM programming to more broadly-based CAPS strategies, at schools both public and private, are turning the heads of students who might not otherwise have considered studies in engineering, math, science or technology.

“STEM programming is growing at an exponential rate in Kansas City,” says Martha McCabe, executive director of the KC STEM Alliance. As of this year, she said, “31 of the 42 public-school districts in the six-county KC region have Project Lead the Way STEM curriculum in engineering, computer science and biomedical sciences and more private and charter schools are coming on board each year.”

Only a few small districts have yet to make concerted efforts,” she said. “Those that are not are focusing on literacy as well as core math and science coursework, which in the long run will still help students.” But, she cautioned, that “isn’t always done in the most engaging way in order to help all students become creative problem-solvers regardless of their pursuit of a STEM education and career.”

One of the region’s most significant strides in that area came last year, when Rockhurst High School, a private Jesuit school, became the first school in either Missouri or Kansas—and one of just 80 nationwide—to earn STEM certification from AdvancED, designed to ensure that the most effective educators and programs are continually assessing and improving to meet the demands of real-world employers.

That came as Rockhurst was accepted into the National Consortium of Secondary STEM Schools—the only Jesuit school nationwide—and it was significant, said STEAM Director Greg Owsley, because “it was awarded to us as a school, not as a program within a school.”

Rockhurst is able to tap into funding sources not available to public schools, particularly with directed donations. And in 2015, it landed a whopper: Euronet Worldwide founder Michael Brown, an alumnus, and his wife donated $2.1 million to take STEAM strategies to another level.

“The unique thing is that it was donated into our operations budget,” Owsley said. “It did not fund brick and mortar—it funded operations costs like my job position, which didn’t then exist.” The ability to hire someone without a full teaching load, he said, “gave me the time to empower a lot of great ideas that teachers already had in the building, and to connect school and students to resources outside the building.”

Elsewhere in the region, the well-known Blue Valley Center for Advanced Professional Studies, and the Northland CAPS program that draws students from seven districts, are incorporating STEM-type classes into a broader curriculum that includes health-care provider roles, marketing and banking, as well as engineering, computer software and advanced manufacturing tracks.

The Northland program has seen an explosion in student interest said Sandy Henshaw, executive director. From a class of 28 students in its debut five years ago, it has swelled to 360 this year. Why? “I believe it’s the relevance we provide to the content they’re learning,” she said. “All of our classrooms are in the industries they’re learning about.”

That means students are outside the traditional school setting, with hands-on learning in the workplace. More than 400 Northland businesses partner with the program with mentoring roles, making financial donations or providing work sites, she said.

Blue Valley, which helped pioneer the regional CAPS strategy, has students meet five days a week for a semester, accruing college credit while learning about high-skill, high-demand jobs. Similarly, the Olathe school district’s STEM Connection has created a series of academies within its five high schools, focusing on engineering, science, human and animal health, bioengineering and math. The Independence district also has embraced an academy structure, with STEM being one focus on a strategy that encompasses business, industrial tech, public service, and the arts.