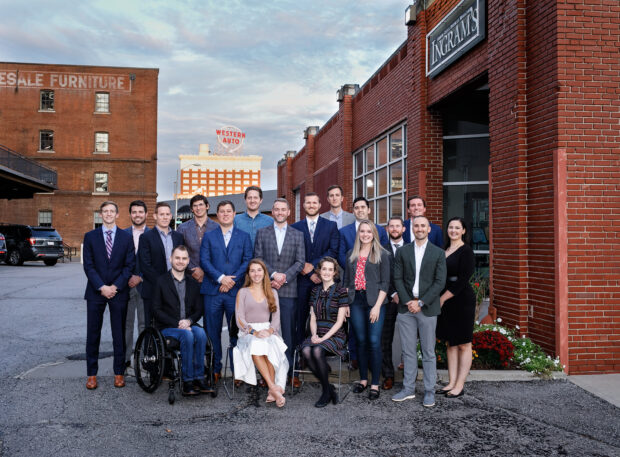 The New School Is Older Than You Think

For the better part of a decade, we’ve heard the complaints from hiring managers and seen the headlines screaming that “The Millennials Are Coming!” and lumping together one massive generation into a seeming mass of selfie-taking, avocado-toast-eating, scooter-riding impostors from another planet who are going to disrupt working life as we know it forever.

Ingram’s 12th installment of 20 in Their Twenties spotlights the talents of a score of these high achievers, most all of whom convened at the magazine on Oct. 9 for the annual Twenties assembly. What we found in their deliberations, and as you will find in the subsequent pages, was a group of thoughtful, focused and determined entrepreneurs and executives who share some similarities with every other generation—but who also differ in some important ways from them, even those at the front of their own age cohort. They value in-person business relationships. They don’t think that the number of one’s Facebook friends is an indicator of career success. And most important, they all understand the value of living in Kansas City.

Moving here after living in Sioux Falls, S.D., said Tim Jardine, account executive at Holmes Murphy & Associates, has been “one of the best decisions I’ve ever made.” 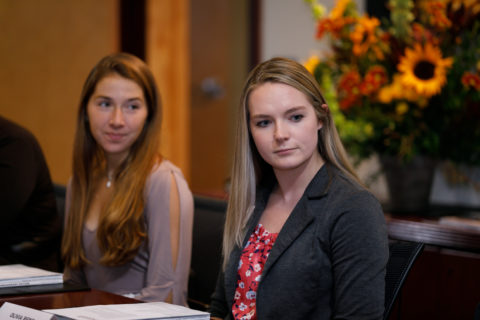 Younger Millennials think technology “is for everything,” while some older generations, and Millennials, might have more tech boundaries, says Olivia Beins, right. It’s natural for younger Millennials to have meaningful business relationships with people they have never met in person, says Amy Regan, left.

It’s difficult to have a business conversation with about 20 Millennials on the younger side of their generation and not have the discussion focused on the implications of technology.

After all, they grew up on it, and near-constant tech innovations have been part of their reality since childhood.

“We all grew up with computers in the classroom, starting with kindergarten and going up,” admitted Barron Roberts, account executive at Blue Cross and Blue Shield of Kansas City. “I’ll date myself here, but we had iMacs in second grade. People are just more adaptable to that at our age. It’s become much more of a larger piece of our lives.”

Depending on the profession they’ve entered, and which company they work for, assembly attendees said they experience varying degrees of tech understanding from co-workers and management of other generations.

“It has to do with the boundary of what we think technology is for,” explained Olivia Beins, a product manager at tech-finance firm C2FO, pointing out that there are even differences between younger and older Millennials. “People our age think technology is for everything, including relationship building, ordering groceries, getting your lawn mowed—literally for anything. Whereas people older in our generation have a more distinct boundary of what it’s used for.”

Amy Regan, a business development program manager at Garmin, said that Millennials’ comfort with technology puts them at an advantage over older generations. The ability to “have a great relationship even though you can’t be in person with one another is something that has been a strong point for our generation.” 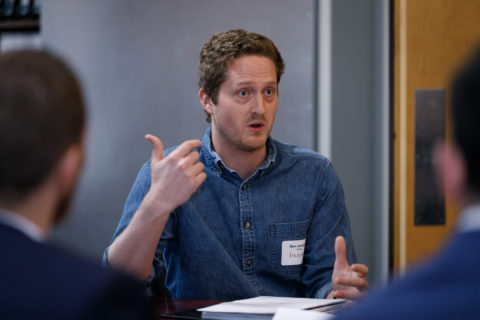 Ben Jackson, founder of Bungii, says those who can’t figure out how to use an app aren’t part of his target market.

In the contracting world, there are several technological advances that have helped save costs and proven that adopting new practices are worth it, says Julie Horn, lead water treatment engineer at Kiewit Power. “It makes it easier because we have less guesswork they have to do and we have more background data when we’re doing an estimate,” she pointed out.

It can get confusing. In some offices, there can be three or more generations of workers, and their associated clients, so knowing the best way to execute important business communications isn’t always obvious.

“It’s interesting because GenX or Boomers will write a letter, scan it, email it, and then mail it as well because they just don’t know,” said Kelly Frickleton, an associate at law firm Bartimus Frickleton Robertson Rader. “I’m the only millennial in my office, and I think I’m more trusting of technology. I’m not scared of the cloud, I know how it works, and I know that if a person doesn’t get something, or we don’t hear from them after a certain amount of time, you can follow up. It’s the same you would do with a letter. But you do spend a lot more time when you’re trying to accommodate every single person’s style.”

That’s ironic when many technological business solutions have been created for the sole purpose of saving time and money. Yet, many older generations often don’t trust these innovations compared to traditional ways of doing business. 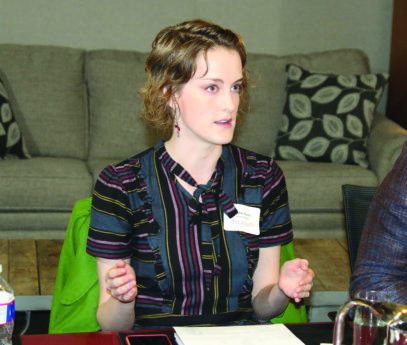 “There’s certainly a pushback you can get from people in certain generations,” admitted Nick Johnson, a staff engineer at Burns & McDonnell, explaining that older employees might not trust a business lead if it’s not done in person. “They will question how real those relationships really are when they’re all digital. But I feel a lot closer with some co-workers in Houston and out on the East Coast because I’m in touch with them via Skype. It’s not the same as having an in-person relationship, and talking to them face to face, but it’s certainly improved a lot and it changes the way we work.”

Ryan Schulteis, a brokerage associate at Reece Commercial Real Estate, tries to accommodate both schools of thought with his clients as best he can.

“There have been a few clients that don’t even have email, and I have to drive, give them the paperwork to sign, and drive and meet them for anything else,” he said. “Then there are some people closer to our age that, if they can’t electronically sign something, are surprised when you have to print something out and sign it. They’re different worlds.”

For his part, JJ Hjalmarson, manager of ecommerce and strategic initiatives at gift and home-décor merchant The Gerson Companies, said that he finds the most successful salespeople are those who blend the older-school soft side of sales with data. “There’s an in-between point where you still have to be a salesman but be able to speak to the buyers that want the statistics and data.” 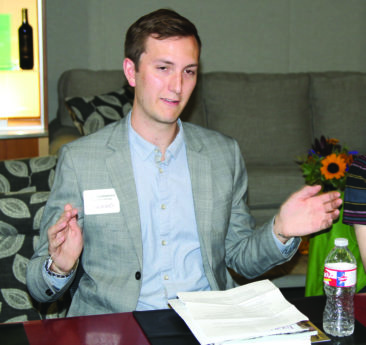 There is a lot to learn from older generations in terms of relationship building with business leads, said Ryan Ridgway, co-founder and chief operating officer of Strategic Capital. He says what “older generations do extremely well is dive extremely deep into relationships whereas I feel like many in our age group sometimes puts quantity on a pedestal over quality,” going “full-bore with technology.”

If you have a certain stance on technology and believe in an “adapt or die” kind of view, then it helps if you own your own business. Ben Jackson is the founder of Bungii, an app that is similar to Uber and used by people who need a last-minute truck to help them move something from a store, or other setting. When faced with whether or not to have a toll-free number for customers to use who didn’t want an app-only interface, Jackson and his team decided against it.

“We’ve decided they’re no longer the target market, and if you can’t use an app, figure it out,” Jackson said.

On the other end of the scale, technology hasn’t come without headaches for Maxfield Kaniger, the founder of Kanbe’s Markets, a nonprofit that sells fresh fruits and vegetables in underserved neighborhoods. When trying to order inventory-tracking software, he hasn’t been able to find a price for the services online and spends time he doesn’t have on a conference call to find out that the product is way above his budget. And when looking for a new headquarters, he is frustrated with the lack of commercial real estate buildings that are well marketed online, and he ends up having to show up for a disappointing in-person viewing.

As with most things in life, attendees seemed to agree that a balance between doing business between old ways and new innovations is the best way to go forward. 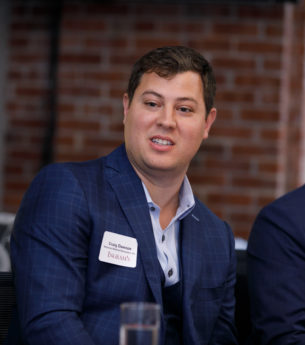 The medical profession has experienced some major breakthroughs due to technology, acknowledged Craig Dawson, chief operating officer at Midwest Medical Resources, but he said the reliance Millennials have on it for social relationships can equate to a “fake life, and we aren’t spending the time to get to know people like we used to.”

For Tom Sorrentino, a benefits coordinator at Bukaty Companies by day and a Lawrence bar and restaurant owner by night and weekends, personal relationships are key in conducting his business with his accountant, attorney and banker. “I can pick up the phone at any time and call them any time of day and have that personal relationship with them,” he said. “I really value them as partners, not just as an accountant I pay every month.”

No matter what generation you’re from, or in what form communication takes place, certain rules are universal when conducting business and have been passed on to younger Millennials.

“Treat others the way you want to be treated,” is a motto that Chris Robertson, director of investment sales and capital markets at commercial real-estate firm Newmark Grubb Zimmer, said he learned at the beginning of his career. “In our business, we work with people from all walks of life, and I found that very important in helping grow my business.”