Something to Shout About

It’s a common business practice: Say thanks to your customers with a small token of appreciation, something as simple as a hand-written note, or tickets to a hot show in town. And if you’re fortunate enough to be the lone distributor of Anheuser-Busch products at the Jackson County Sports Complex, perhaps tickets to a Royals game. 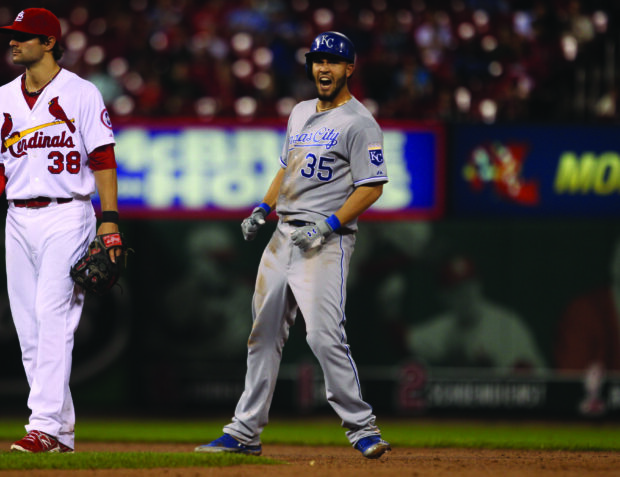 Say It Loud: With a big assist from the bat of Eric Hosmer, the Royals are staging a late-season push, with an eye on one of two American League wild-card spots.

There’s just been one problem with that last one in recent years, says Mike White of County Beverage Co., which has those A-B distribution rights. “For a long time, it was kind of hard to give ’em away,” says White, reflecting on a long string of disappointing seasons rarely broken since the Royals’ last playoff appearance—their World Series championship year, 1985.

This year, it’s another story, White says. “Now, we walk in to our retail accounts, the first thing we hear is, ‘Hey, you have any Royals tickets?’ We have season tickets for that, and the lady who takes care of those says they’re gone, and have been for a month or so. People really want them.”

That’s just one measure of a community’s heightened enthusiasm for the Royals, who remained in the hunt for one of two American League wild-card spots as late as mid-September. And business executives say the positive feelings generated by a competitive pro sports franchise contributes to consumer optimism in other ways.

“When a team wins, everything tends to ramp up—TV ratings, licensed merchandise sales, corporate partnerships and, of course, ticket sales,” said Mike Bucek, the Royals’ director of marketing. “Fans in Kansas City are fiercely loyal to their local teams. That’s a characteristic of  ‘small markets’—they are very proud of the teams that represent the city and when those teams do well, the numbers increase.”

Not surprisingly, he said, the team has seen more activity earlier this year than normal in terms of potential corporate sponsorships. “Current partners are anxious to extend their current agreements if expiring,” Bucek said, “and the interest level from potential corporate partners is strong as we’ve experienced here.”

But outside the stadium, do things like beer sales really go up when the team is winning?

“More than you’d think,” says Jon Poteet, director of marketing for Central States Beverage Co., which distributes hometown Boulevard Brewing Co. products, plus the MillerCoors line, at Kauffman Stadium. “The last time they made a run and had a .500 season, we saw something like a 12-to-13 percent spike in sales, because the whole town was so excited.”

Vendors for sports bars, restaurants, sportswear outlets, grocery stores and liquor stores also enjoy a sales bump when the locals are racking up the W’s. And in Kansas City, the effect is enhanced when the Chiefs are doing well, as with their strong opening-day performance in a road win at Jacksonville.

Of course, not every pro sports team has spent the past decade staring up from its division cellar. Sporting Kansas City has ridden on-field success, the fan experience of a new stadium and savvy marketing strategies of its ownership to greatly raise the profile of pro soccer here. One beneficiary of that is Challenger Teamwear. The Lenexa-based company specializes in sales of soccer uniforms and equipment for teams, leagues and clubs, and Sporting’s success is a huge lever.

“Absolutely,” said Paul Lawrence, vice president of sales for Challenger. “Sporting Kansas City really raises the levels of participation across the sport, and there’s more business to be had for everybody.” A Sporting season-ticket-holder himself, the native of Liverpool has seen Challenger’s revenues grow from zero to more than $40 million in 16 years, a period roughly coinciding with a growing soccer fan base here.

“I’d love to think our success is because of our creative appeal, but there’s no doubt it’s much easier to growth the business with the sport growing,” Lawrence said. He watched at a sports bar recently as U.S. soccer players took on Mexico, “and the place was packed. When the USA scored, the ceiling came off.”

So times are good. At least for now. But is the impact of the Royals’ success fleeting, or is there some sustainability for local businesses?

“The reality is, while I think it’s having an impact now, I don’t think it’s as big as it’s going to be each week moving forward,” Poteet said. “It absolutely has a carryover effect: If the Royals can make the playoffs, people in Kansas City are going to celebrate like the season’s still going.”

More so if that first wild-card duel is an away game. “That leaves an empty Kauffman Stadium, with people going to  bars, restaurants and other gathering spots to watch, or having friends over to watch,” Poteet said. “The nightlife, restaurants, locals bars and taverns, will pick up substantially, and while the team is out of town, grocery stores as well, because of the party style atmosphere Kansas City is so well-known for.”