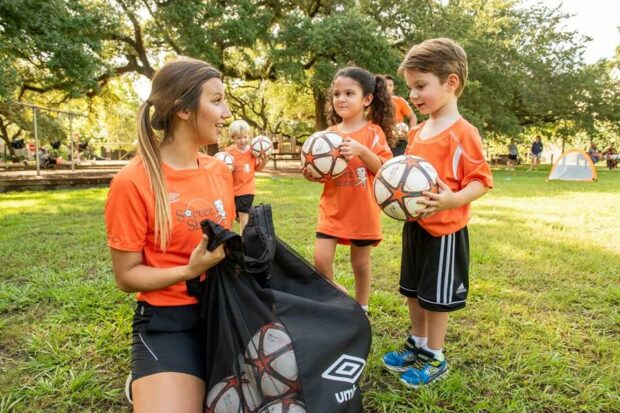 Soccer Shots, a franchise-based early education program for the sport, has big growth plans for 2019, and the Kansas City area is included. The effort comes at a time when the greater area is riding a soccer wave, with the ongoing popularity of Sporting Kansas City, a bid to become one of the 10 U.S. cities involved in the 2026 FIFA World Cup and coming matches by international professional teams.
With 120 franchises in 40 states, the Harrisburg, Pa.-based company is looking for franchise owners for the metro area, which will be split into four operating territories. Part of this year’s expansion also includes plans to open add franchises and territories in Chicago, Detroit and Milwaukee. Each territory roughly represents a population of 500,000.
Soccer Shots’ early-education soccer programs target children from ages two through eight, and it frames its instruction based on the way children learn in specific age groups.
“You can’t teach a three-year-old the same way you teach an eight-year-old,” explains Matt Kurowski, chief operating officer. Each age group requires different key words and a specialized focus on particular skills .Most programs tend to teach all children, no matter the age, the same skill set in the same format, Kurowski says.
There are currently about 440,000 children participating in Soccer Shots in the United States and Canada, and the company expects the total to grow to 1 million by 2022.
Apparel company Umbro is on board and recently signed a multi-year jersey licensing deal with Soccer Shots. The firm has recently been named to several “best of” franchising lists.