I vividly remember the Royals’ 1985 American League Championship Series with the Toronto Blue Jays and the World Series against the Cardinals. The playoffs were electrifying and the finale was epic. The come-from-behind win against the Cardinals in Game 6 set the stage for a serious thumpin’ in Game 7 (see Editor’s Note, October 2014 at Ingrams.com).

The Cards made the playoffs in 2014 and again this year, but I was really disappointed they were unable to make it past the Cubs in the NLDS. The irony of this year’s post-season is that Cards fans, by and large, are cheering for the Royals. This has less to do with both teams calling Missouri home than the generations-long rivalry between the Cardinals and Chicago Cubs.

The dust continues to be stirred up in this year’s playoff race, and at the time of this writing, only four teams remain in contention for the World Series title. The Royals are leading the series 2-1 against the Blue Jays, following a tough loss in Game 3 in Toronto. The New York Mets sit 2-0 before resuming that series in Chicago. What differentiates the Royals this year—even from last season—is their ability to rally, often in a come-back game to secure lots of late-inning runs and wins.

The old saying holds that a rising tide lifts all boats. That’s certainly been the case with what interest in the Royals has done for bars, restaurant and sportswear sales, not to mention the impact it’s had with attendance soaring at The K this year.

It’s another welcome step up from the excitement the team generated in 2014. Last year’s come-from-behind Wildcard Game win against the Oakland A’s was spectacular—I’ve really never seen anything like it—and that extraordinary win may have set the stage for the team’s indescribable performance in last year’s playoff series, winning all eight playoff games leading up to the World Series. The Royals followed that win over the A’s with three straight games to win the ALDS against the L.A. Angels, followed by four straight wins against the Baltimore Orioles—stunning all—before facing the San Francisco Giants in a World Series whose outcome remained in doubt until the last out of the ninth inning of Game 7. 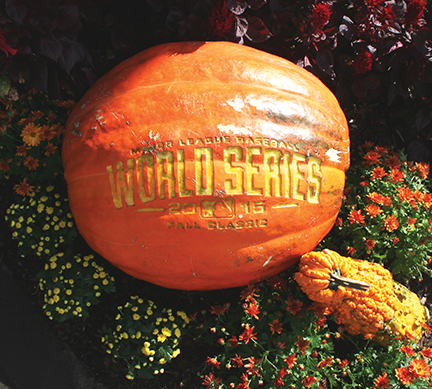 I found it particularly interesting last year when FOX reported that in 48 out of 50 states, fans favored the Royals over the Giants in the World Series. We even heard them called America’s Team. If the popularity of the Royals ranks high across the nation, support for the team in this area is indescribable. Epic years like 1980 and 1985 were incredible, and nothing should dilute the excitement of winning it all in ‘85. What I saw in the ’80s, however, pales to the popularity of our 2015 Royals. This is a special team and win or lose, they’ll forever be remembered as an extraordinary team that possesses perhaps more spirit than any current franchise in any sport.

I like HyVee’s commercial that shows a young boy playing baseball. The voice-over states that “He may not be the oldest, but he’s arguably the biggest fan.” That may be true … but he likely hasn’t met my 5-year-old grandson, Hudson. He’s off the chart. Hudson can name every player on the Royals roster and tell you their number. He’ll also start to rattle off names and numbers of Royals past, back to the ’80s. That’s before he gets into stats and players from other teams. Nine year-old Samantha is a huge fan who likes to wear my old shrinking 1985 World Series jacket. Five month-old Rowan attends games and watch parties in his Moose outfit, complete with antlers.

The Royals rise to prominence and run through the playoffs last year enabled anyone younger than 40 a chance to witness greatness, something we haven’t experienced for three decades. Let’s hope the spirit of our city combined with the extraordinary talent on the field continue to win and to claim a World Series title.

Ingram’s pumpkin was carved before the playoffs. Of course, if you think the Royals are sweating things out, imagine trying to time a commemorative issue around the uncertainties of what could happen while at press. We only hope this issue arrives before the possibility of a Blue Jays’ comeback. But please Royals—win it all!