The chief investment officer for the region’s biggest hometown bank offers his economic forecast for a new year. 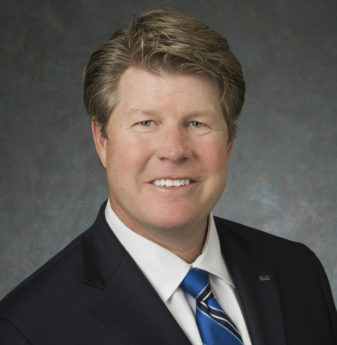 Q: Not many folks predicted that we’d be looking at such a sharply higher inflationary cycle this year; did 2021 pan out the way you might have expected in that area, looking back?

A: Yes and no. I looked at all our forecasts at the beginning of 2021, and at that time we had a high degree of confidence that we would see robust economic activity—because of stimulus, pent-up demand, a number of factors— and it came to fruition. But, no one expected the giant spike in inflation. We were confident that interest rates, with the Fed’s transparency, for the short term would stay at virtually zero, which they did. We thought the 10-year Treasury would move from 92 basis points at the start of the year, to 1.25 percent by the end of the year, and here we are at 1.5 percent. So, our forecasts were directionally correct, the surprise, so to speak, was the spike in inflation.

Q: But bounce in prices shouldn’t have been surprising, after the events of 2020, right?

A: Some inflation was expected because of base effect; look at what happened to oil in 2020—it went down 20 percent. So, you had virtually zero inflation in 2020, because everything shut down for months. The expectation was that, year-over-year due to base effect, we might see a bigger number in 2021.

Q: How much of the inflationary move may resolve itself with natural supply-chain and labor corrections, and how much is structural and long-term?

A: We had incredible stimulus, so people had the ability to consume. And they did. Then, given the Paycheck Protection Program, the labor market healing, quit rates and job openings at record highs, people felt good about spending, so they had both the willingness and ability to consume. Since parts of the economy remained shut down, such services—you couldn’t go to movies, sporting events, cruises and people resorted to buying goods via Amazon.com and the like. And, since many of those products are made or assembled overseas, all of the sudden, shipping costs went up, you had supply chain constrictions. Additionally, as the economy opened up, you didn’t have enough people go to work, resulting in wage inflation. Much of the spike in inflation will stabilize while some, such as wage inflation, which is a structural change may be more persistent.

Q: So some of this will be with us for a while?

A: I’m not trying to criticize the Fed, they have a tough job, but respectfully, only part of this will be transitory, part will not—there has been some structural change. The Fed stood for the longest time on that transitory message, but now it’s changing its tune.

Q: Anything in the metrics of pricing that is of note?

A: We break down inflation by starting with the Consumer Price Index (CPI)—it is what it is. It’s driven by shelter. Something like one-third of the CPI calculation is shelter, not only home prices, but rent equivalents. Home prices skyrocketed, but rents really didn’t, especially in big urban areas like New York. Now, we think rents will be on rise and home prices will stabilize to some degree.

Q: What about other components?

A: Some of the transitory inflation they talk about involves energy—that’s 7.3 percent of CPI. When you look at just oil, it’s up 46 percent year-to-date. But how inflationary is that, really? Today, West Texas Intermediate is at $73 a barrel. In 2018, oil was $75 a barrel. For the past three years, there’s been almost no inflation in energy. But it bounced back after being down 20 percent in 2020—that’s the base effect I mentioned.

Q: And the structural aspects?

A: What will be structural change is wage inflation. Prior to the pandemic, in the U.S. we had 159 million people in the labor market, today, we have 155 million. Where are the other 4 million? That can lead to wage inflation. I would say almost half of that involves retirements. When you look at participation rates of those 55 and older, it went down, stayed down and continue to go down. Because you’re short 4 million workers, you get wage inflation. We think that is structural, and that will be around for a while. It’s hard to put a number on it, but we think inflation will be higher than the Fed’s 2 percent projection into 2022, and in 2023, as more enter the labor market, and hopefully we finally crush COVID, wage inflation will start to subside, closer to the Fed’s target.

Q: As the Fed attempts to address that with higher interest rates, where will it turn?

A: The Fed early on was very trans-
parent; they said they were going to keep rates low. It’s a bit different now. They thought they could control inflation and, let the economy run hot for a while, but it’s not a problem until it’s a problem. My sense is that it’s now a problem. The Fed took out “transitory” in their vernacular, and they are now telegraphing quite clearly that they are going to be aggressive curbing Quantitative Easing. There’s a process to it: stop QE, asses the data, start hiking rates. A year ago, everyone was in the camp that it’s a one-year process. Now, it is clear, the process will be much shorter.

Q: So where do you see rates going?

A: Our assessment is we get three hikes in 2022: From 25 basis points to 1 percent by end of year. How far will go? Research tells us historically that the Fed continues to raise rates until it gets positive real rate—the yield minus inflation. Today, at 25 basis points, with inflation at 4 to 5 percent, you have a negative real interest rate.

Q: No short-term fixes, then?

A: Just for fun, use 3 percent inflation rate over the next year or two. If the Fed increases three times,  at 1 percent, minus the 3 for inflation, that gives you a minus-2 percent real interest rate. Three hikes in 2023 gets you to 1.75 percent—still at negative real interest rate. Then three hikes in 2024 gets you to 2.5 percent, and you’re getting really close to their target.

Q: How does that play out for investors?

A: We believe, and the markets are accepting this, that the markets are pricing in these rate hikes. Any change to that, whether its additional hikes or larger hikes than the measured pace of 25 basis points, will send ripples through the markets. All of the sudden, the Fed can’t control things, and for whatever reason, now a move is not 25 basis points higher, it’s 50 basis points. That will have a negative impact on the markets and perhaps lead to subdued economic activity.

Q: You mentioned the energy aspect of CPI; what’s the outlook for prices there?

A: Again, there’s always volatility. When I look at natural gas, we started 2021 at about $2.75 per mcf. Then the big cold front in February hit, and it bumped to $3.25. Today, it’s at $3.75. It did climb through the year; in September and early October, it was at $6.25. That’s a big change. But in the past three months, natural gas went back to $3.75. It will go up in January and February, and that’s typically a supply-and-demand issue.

Q: The impact of that on consumers?

A: We make some assumptions that energy moves sideways from here. We think that’s manageable, because remember, wage inflation is significant—the quit rate is the highest since they started keeping records. Not many people are just sitting around; they’re out getting a better deal. As long as wages keep pace, the increase in commodity prices will be manageable. If natural gas spikes back to $6.25 and stays, that will be a shock to the system. It will impact discretionary spending, with more household income going to utilities, and that could have negative implications.

Q: The big rebound staring in mid-2020, and the increased growth in 2021 was quite uneven, depending on business sector. Will 2022 see things even out?

A: The best example of that is hos-pitality and leisure. These industries were hit hard in 2020, obviously losing a lot of those close-contact jobs, and some people just don’t want to be in those jobs anymore, so they’re making a career change. That impacts the labor market and wage inflation in those sectors.. I don’t think this will be structural change, because of human nature— we want to go do things, have experiences, take family vacations, and go to Disneyland or take a cruise. Looking at the data, we just processed 2 million people through TSA, a record since the pandemic. People want to go out. Those sectors will recover.

A: Our conclusion, after all the analysis, is that the return expectations in risk-based assets will be lower than the past couple of years—still positive, but lower. A couple of reasons for that: One is that the Fed created a very conducive environment for risk-based investments over the past decade with low interest rates and accommodative conditions. I do think going into the next couple of years that the Fed will change its tune, rates will be on the rise. There’s an old adage in investing: Don’t fight the Fed. Over the last 10 years, investors have loaded the boat on equities. Now they will be fighting the Fed. I still think they can get positive rates, but they have to be aware they’ll be fighting the Fed.

Q: When you say positive rates, how positive?

A: We do think you’re looking at high single-digit returns for next year. Revenue growth for companies and earnings should be positive in 2022, driving stock prices. High single digits pales in comparison to the 27 percent in the S&P 500 last year, but that’s attractive compared to other asset classes, like bonds. As interest rates rise, bond prices go down. If you measure one-year returns, you could have negative returns on fixed income vs. seven percent in stocks. That’s why stocks remain an attractive asset class.

Q: Where else might investors be turning for yield in 2022?

A: You can find good quality stocks with attractive yields and increase their dividend every year. There is yield to be had in equities. Because dividends typically increase and the prices go up, that’s a great inflation hedge, whereas with bonds, inflation destroys value. Equities are one place to look; however, you must understand the risk. And real estate, whether residential, retail, or industrial, you can find some attractive yields. We’re not too high on commercial office space right now. But even with bonds, if you look at high-yield or junk bonds—which is not a dirty word in our business—if you have the credit-analysis acumen and the resources to do analysis on lower-quality bonds, you can develop a decent portfolio with attractive yield. We’ve used these asset classes in our client portfolios for years. They all have their own risk, and that’s a nuance you must understand.