A Kansas City Council committee recommended approval of plans for the Golden Plains Technology Park. Plans would turn 882 acres of land southwest of U.S. Highway 169 and 128th Street into a massive data center. Developers are seeking roughly $8.2 billion in incentives for the campus’ construction.

A push to construct a massive Northland data center campus is starting to gain momentum. 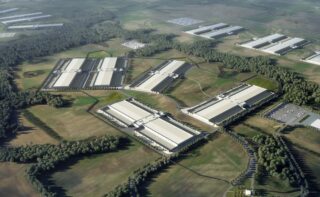 Developers have begun the process of gaining an estimated $8.2 billion in incentives with an appearance after a Kansas City’s Transportation, Infrastructure and Operations Committee committee recommended approval of a 37-year Chapter 100 industrial development plan and a request for as much as $103.8 billion in industrial revenue bonds for the 25-year life of the abatement.

Approved plans for Golden Plains Technology Park entail 5.5 million square feet of data center construction on 882.5 acres, with 16 buildings to be built in three zones. Operations are slated to begin next year, with the campus reaching full operational capacity in 2032.

The deal would exempt Diode Ventures from the city’s typical Chapter 100 policy, which caps projects at a 50 percent real property tax abatement over 10 years. The proposed Golden Plains Chapter 100 plan would have the bonds provide for a 100 percent, 25-year real property tax abatement for each phase of the campus. Diode Ventures would make fixed annual payments in lieu of taxes (PILOTs) equal to the sum of 100% of real property taxes, not to include improvements from new construction, plus 25% of taxes assessed Jan. 1 the year after improvements are completed.

The company would make $841.6 million in PILOT payments during the 25-year abatement period, and pay $954.5 million and $1.5 billion in real and personal property taxes, respectively, as each phase’s exemption expires over the project’s lifespan.