A 2.5 cent increase to Missouri’s current 17 cent gas tax under Senate Bill 262 is said to have the potential to bring in $460 million annually for transportation infrastructure from October 2021 to July 2025. A Missouri Chamber study estimates the investment could generate $1.3 billion in sales and add 17,000 jobs each year. 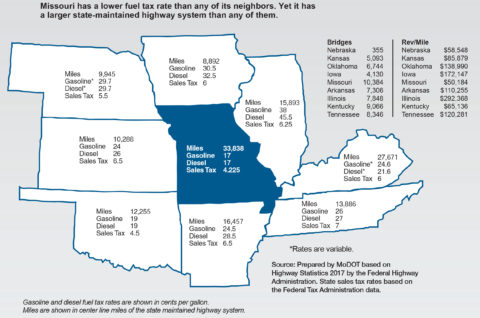 A broad coalition of transportation stakeholders, including the Missouri Chamber of Commerce and Industry and the Missouri AFL-CIO, have released a new study analyzing the economic impacts of a proposed transportation investment bill. The study was completed by Economic Leadership, LLC.

The proposed legislation, Senate Bill 262, is expected to generate about $500 million per year and direct these funds to address the infrastructure backlog.

Senate President Dave Schatz, R-Sullivan, is the sponsor of Senate Bill 262. Schatz said this increase is expected to bring in $460 million a year. That would cut into what MoDot says is a backlog of unfunded work that currently stands at $800 million.

The report says one benefit would be the increase in economic activity in the construction sector spurred by the new gas tax revenue. These construction jobs are often stable, higher wage jobs. The spending of these higher wages can produce ripple effects throughout the economy.

The second benefit measured in the report is cost savings to Missouri drivers from the improved quality of roads and bridges.

Together the annual benefits to drivers and infrastructure construction investment could result in the generation of over $1.8 billion in sales in Missouri’s economy. This would also create an overall increase of $722 million in earnings across the state and more than 17,000 jobs every year.