When you arrive in Kansas City, your expectations may not be met, but they’re likely to be surpassed as you discover the incredible array of lifestyle options and commercial activity to be found.

Kansas City. It’s a proud and prosperous Missouri municipality, certainly. But it’s also a bi-state Metropolitan Statistical Area of about 2.5 million people, an economic powerhouse of 16 counties with four at its core along the state line that separates Missouri and Kansas. 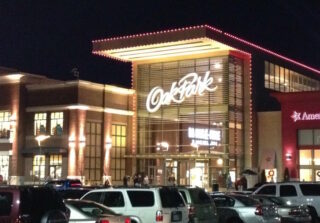 Suburban Spokes | Oak Park Mall, the most successful of the region's enclosed shopping venues, has been an economic anchor in suburban Johnson County for more then 40 years.

With more than 650,000 people in Kansas City and more than 100,000 in each of four nearby satellite cities, the Kansas City Metro has become an integrated community of people who earn their livings and enjoy their leisure on both sides of the state line.

Where people once traveled from the suburbs into the city center to earn their daily bread, they now fan out all over the region. Lee’s Summit in the southeast. Overland Park, Lenexa and Olathe in the southwest. Johnson County in the west. Wyandotte and Leavenworth counties to the northwest. Platte and Clay counties in the increasingly vibrant Northland. And of course, there is still the Central Business District, coming back strong after too many years of decline. Today, 100,000 people make their way downtown every day.

Some speak of so-called “border wars” and rivalry across the state line, but the truth is that the Kansas City Metro is a collection of communities from two states with a vested interested in seeing one another thrive.

Just look at the immediate surroundings of Kansas City, Missouri: the manufacturing facilities in Kansas City, Kansas; the affluent mix of residential and business communities in Johnson County, Kansas, which includes two powerhouse cities of its own—Overland Park, Lenexa and Olathe; the aforementioned and fast-growing Northland.

Far from being a collection of competing com-munities, the region is a tapestry of economic and business diversity. The fabric of that tapestry is woven in such a way as to help the region avoid the turbulence of booms and busts that afflict metropolitan areas dependent on a single industry or business sector.

Here’s a brief look at the fascinating blend of four cities (out of about 50) that makes up the Greater Kansas City metro:

Kansas City, Kansas: Only about 20 years younger than the Missouri neighbor it shares a name with, this city of 148,000 has been on a significant growth trend. In addition to the manufacturing mentioned earlier, “KCK’ has seen a rise in people-friendly attractions, such as The Legends shopping center, Children’s Mercy Park (home of the Sporting KC soccer club) and NASCAR destination, Kansas Speedway.

Independence, Missouri: Most Jackson County operations staff are to be found in Downtown Kansas City, but if you want visit the original county seat, you have to come here. The hometown of President Harry Truman has a population of 117,200 and has been experiencing its own wave of development in recent times.

Overland Park, Kansas: The biggest so-called “suburb” of Kansas City is also the one with an incredible track record of growth. It was only incorporated in 1960 but has grown to 178,000 residents stretching across the vital residential and commercial expanse of Johnson County.

Olathe, Kansas: The seat of Johnson County, south and west of Overland Park, has felt the refreshing winds of growth, too. Its late 1970s population of about 18,000 is in the neighborhood of 132,000 today. Olathe also boasts the world headquarters of Garmin International, which has its eye on expanding its employment rolls.