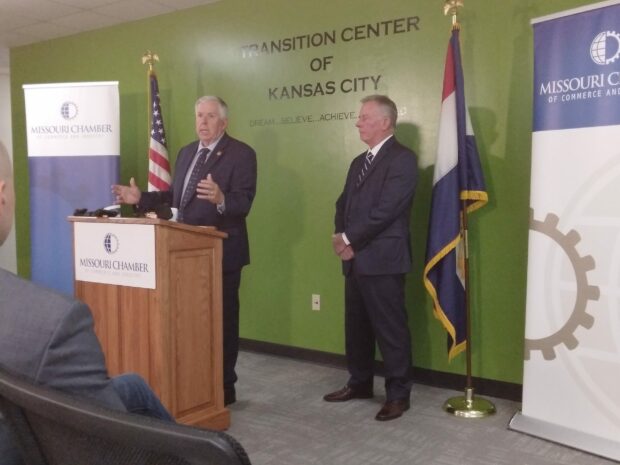 This time, the call for crime reduction in Missouri is coming from the state’s business community.

The Missouri Chamber of Commerce brought a special guest to Kansas City today as Gov. Mike Parson joined chamber CEO Dan Mehan and other public-safety officials to unveil multi-disciplined approach to crime reduction in the Show-Me State, with a special emphasis on reducing numbers of repeat offenders through job training and assistance with mental health and substance abuse.

It was one of two stops on the day, following a similar event in St. Louis to take the wraps off of the Chamber’s Safer Missouri, Stronger Missouri strategy, hailed as a business-led, statewide approach to reducing crime in a state where the three largest metro areas–Springfield is the third–consistently rank in among the nation’s Top 15 for per-capita violent crime.

“Crime is hurting Missouri’s economy. It’s impacting businesses large and small in communities of all sizes. It’s hurting our ability to attract business investment. In some cases, crime is driving jobs out of the state,” Mehan said in his opening remarks at the Transition Center of Kansas City, in the West Bottoms. “Businesses are united. This is a crisis that must be addressed now. We know that many problems need to be handled locally, but statewide policy must be deployed as well.”

Accordingly, the Missouri Chamber Foundation spent months consulting with business leaders, public-safety experts and community organizers to create a plan that also focuses on more police on the streets, more consistent and transparent prosecutorial efforts and sentencing, improved data-gathering and better tech tools, among other tactics.

Parson, a former sheriff, addressed the grou, saying. “public safety will always be a top priority for our administration. With the support of the Missouri Chamber, our state’s business community, and our law enforcement professionals, we are ready to put good ideas to work to combat crime in our state.  … We are excited to work with the Missouri Chamber to move forward with this statewide approach that’s focused on fighting violent crime, supporting law enforcement, and making our communities safer.”

“Missouri is making great progress overall and public safety is the next area where our efforts can make a big difference for our state. We thank Gov. Mike Parson for his strong support as we embark on this bold, challenging new initiative,” said Mehan. “We believe our Safer Missouri, Stronger Missouri strategy provides a clear roadmap with proven ideas that have helped other states lower crime. Our approach relies on Gov. Parson and the Missouri General Assembly to enact powerful new laws that address this issue from a statewide perspective. This is a bipartisan plan with ideas that can unite the legislature and move Missouri forward toward a safer, stronger future.”

You can read the full Safer Missouri, Stronger Missouri report at www.mochamber.com/SaferMissouri.