The latest grant funding for the East Locust Creek Reservoir Project in northern Missouri arrived from the U.S. Department of Agriculture this week. The USDA granted $25 million for a total contribution of $81 million to construct a lake that will serve 10 Missouri counties.

Missouri has received additional funding for its long-slated reservoir project located in the north-central region of the state. 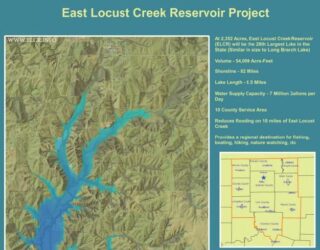 In the works since 2018, the East Locust Creek Reservoir Project most recently brought in an additional $25 million from the U.S. Department of Agriculture (USDA), according to a Monday news release.

The project consists on construction of a lake and dam that will help provide a dependable water supply for the region.

Following completion, the reservoir is anticipated to provide water to an estimated 54,000 residents across 10 Missouri counties which include Adair, Chariton, Grundy, Linn, Livingston, Macon, Mercer, Putnam, Schuyler and Sullivan counties.

Back in 2010, Sullivan County residents passed a retail sales tax in support of developing a reservoir project, just one portion of the millions in investment that have trickled in over the last several years.

“These additional resources will get us one step closer to finishing the project and bringing an end to the severe water shortages that have disrupted businesses and daily life in the area,” U.S. Senator Roy Blunt (R-Mo.) said in the news release. “Improving water infrastructure and reliability will, in turn, create a stronger foundation for economic development in the years to come. I am committed to ensuring that the federal government continues to make this project a priority.”

All funding for the reservoir so far has come from the citizens of Sullivan County, current NCMRWC customers and the USDA-Natural Resources Conservation Service and the State of Missouri.

The $25 million grant now brings the total amount invested by the USDA to $81 million.