Maybe Creditors Should Hire a ‘Bawlerout’

The history of personal debt in the U.S. suggests we’ve not strayed far from our roots: Americans always look for more.

Although we tend to see massive personal debt as a feature of modern life, a sign of our national slide into greed and decadence, our history suggests that we have always been a nation of debtors and often a nation of deadbeats. In the immortal words of Artemus Ward, Abraham Lincoln’s favorite stand-up comic, “Let us all be happy, and live within our means even if we have to borrow money to do it with.”

Alexis de Tocqueville arrived in the United States in 1831. As Tocqueville observed, in a society where aristocratic privileges had been abolished and where all career paths were open to anyone willing to work hard, the citizen could readily delude himself into thinking “that he is born to no common destinies.”

“When an immense field for competition is thrown open to all,” he continued, “when wealth is amassed or dissipated in the shortest possible space of time amid the turmoil of democracy, visions of sudden and easy fortunes, of great possessions easily won and lost, of chance under all its forms haunt the mind.” Under these circumstances, “The present looms large … and men seek only to think about tomorrow.” 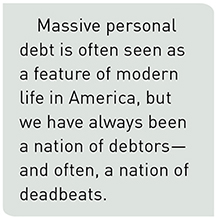 Visiting 10 years later, Charles Dickens had a more malign view of America’s flirtation with debt. In his sour-grapes tour of America, Dickens added “the love of ‘smart’ dealing” to the causes of the nation’s periodic insolvency. “This smartness,” he contended, “has done more in a few years to impair the public credit, and to cripple the public resources, than dull honesty, however rash, could have effected in a century.”

It was not just foreign social critics who were fretting out loud about the easy acceptance of debt by both individuals and governments. Mark Twain told of a speculator overheard boasting, “I wasn’t worth a cent two years ago, and now I owe two millions of dollars.”

Famed orator Edward Everett blamed the Panic of 1857 on “a mountain load of debt” assumed by citizens, communities, businesses, and governments in unwitting concert. Everywhere Everett looked he saw a “natural proclivity to anticipate income, to buy on credit, to live a little beyond our means.”

In 1890, the U.S. census estimated the private debt of the nation’s households to be $11 billion—roughly 150 percent of the nation’s average household debt today, if you adjust for inflation. The superintendent of the census was sufficiently unnerved by the proof of America’s “debt-creating mania” that he pleaded with his fellow citizens to come “to their sober senses” and launch a new era of “retrenchment and debt-paying.”

For better or worse, a variety of businesses emerged to accommodate those in the grips of this mania. The first American pawnshops did not open until the early decades of the 1800s. By, 1897 that number had climbed to 134. Said one crusading journalist toward century’s end, “The city can no more dispense with the pawnbroker than it can with the baker or the milkman.”

Borrowers often turned to pawnbrokers to settle up debts incurred through a seductive new phenomenon known as installment buying. In the early part of the 19th  century, this phenomenon was reserved for people of means and was offered by retailers as something of a minor honor.

Not until the 1880s did the working classes get in on the game. To recruit them, large retailers hired “pullers-in,” middlemen who spoke the customer’s language, literally, and introduced them to the wonders of buying on the installment plan, American-style. 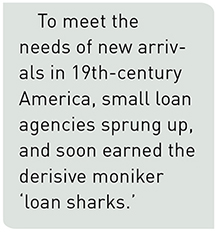 Late-century American cities were more diverse than they had ever been or have been since. New arrivals did not show up wearing Lebron James jerseys with iPods on their belt. They came as strangers to a strange land and appreciated the rope-showing service of the retailers’ middlemen.

A memoirist of the period recounts how one female middleman—middleperson?—sold the writer’s mother a sewing machine, then showed up once a week for the next 25 years to collect the 25-cent installment owed, in the process becoming a close family friend.

To meet the needs of these newcomers, small loan agencies sprung up across the fruited plane. To turn a profit on small loans with high default rates, these agencies had to charge 20 percent interest per annum or more. As collateral, they attached a worker’s wages.

As one might expect, these small agencies did not enjoy any better a press than payday loan operations do today. In fact, some time in the late 19th century, reformers adapted the slur on real-estate speculators, “land shark,” to the more memorable “loan shark,” applied to small lenders.

Despite the mob connotations of the phrase, these lenders rarely, if ever, broke legs. Generally, the worst pain they inflicted on a deadbeat borrower was to sic a “bawlerout” on them. Almost always a female, the bawlerout would try to catch the defaulter in front of friends or coworkers and—you guessed it—bawl her out.

Shame was still a viable currency in the 19th  century. I wish it were today.