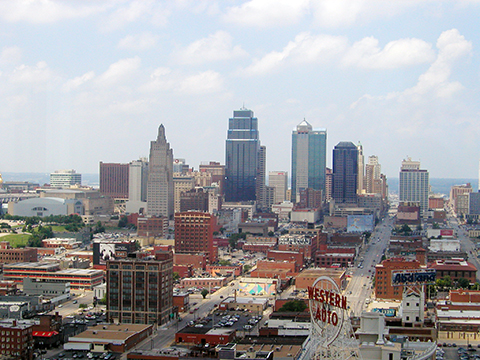 Downtown Kansas City’s residential boom is both widespread and vertical, with high-rises built from the ground up or fashioned from redevelopment.

Have you seen any of those before-and-after photos of Downtown Kansas City, comparing what it looks like
today from the pre-development-boom years before 2000? Both of those images are fixed in Lindsay Tatro’s mind, and in her daily life.

The 32-year-old architect for Piper-Wind Architects in the Crossroads once had a bird’s-eye view of the expanse that is now the Power & Light District—the firm made its home on the 30th floor of the Power & Light building when she started there right out of K-State in 2005.

Fair to say, things have changed. “It was amazing,” she said of watching Downtown’s transformation. “To be able to see all the construction going on with the Sprint Center, Power & Light, and remember how empty that space was. On walks home, I would physically go over to Grand because as that development came up, it brought more people and helped bring more businesses that are open on evenings and weekends. Plus the tourists. It was exciting to see the energy and how much that development has brought to Downtown.”

Those walks refer to her abode in the River Market, where she and her husband, Scott, settled after college. They’re living, breathing examples of what Downtown renewal advocates say will be the real salvation of the central business district—young professionals in good jobs (Scott is a project manager at Cerner Corp.) who are looking for an urban lifestyle, rich in amenities, in a walkable setting.

Although she identifies more with late-stage Generation X than with the Millennial set, Tatro says the Downtown lifestyle is the right fit for them: When the time comes for family, they hope to be able to stay put and are counting on development of quality schools to help make that happen. She’s also engaging fully in the Downtown lifestyle, now in her fourth year as president of the Downtown Neighborhood Association.

Now 20,000 strong, the Downtown population needs to hit 40,000 to have a vibrant, sustainable community, advocates say. And with a wave of new construction, from the ground up or from renovations and rehab work, from small complexes to skyline-changing towers, developers and contractors are making headway to build that community.

If the commercial realty adage about retail following rooftops holds true, Downtown Kansas City is in for some interesting retail expansion in the years to come. The “rooftops” in this case are apartment complexes and towers, rather than single-family residences. But thanks to an apartment-building boom that developers believe will continue for years, an infusion of residents is already under way in the central business district and the greater Downtown area.

Just this year, we’ve seen movement that adds nearly half a billion dollars’ worth of space to Downtown’s residential assets:

Still to come is work on a $63 million makeover of the Power & Light Building, the iconic tower that has stood over Downtown for more than 80 years, but one sadly out of date as an office building in today’s world. Just this month, NorthPoint Development closed on the acquisition and will turn that 34-story limestone hulk into 275 units, most in the main tower, but 60 in a new adjacent structure that will include a parking garage. And along one of Downtown’s most under-used assets—the Missouri River—another Indianapolis company, Flaherty & Collins Properties, is planning to invest $63 million to build nearly 400 apartments and retail space on five of the 55 acres that sprawl past the river’s south bank.

Projects like those, and others on the drawing board, will help drive an increase in the Downtown residential base, which roughly doubled from 2000 to 2012. They will also help ease a demand crush that has consistently kept apartment occupancy rates north of 95 percent for several years now. And while many of those units will qualify as luxury living—with a corresponding increase in rents—the commercial center will still feature urban apartment living considerably less expensive than found in most metropolitan areas.

The most dramatic change in Downtown housing is already under way at 13th and Walnut, with the One Light building. Demand for those 315 units has already produced 80 deposits and a waiting list of nearly 800, said Nick Benjamin, development director for Cordish. The reception for penthouse units was part-
icularly gratifying, prompting the modifications for matching space and amenities on the 24th floor as well.

“The response has been pretty unbelievable so far,” Benjamin said. “It’s catalyzing our plans for the second tower.”

That would be Two Light, with work likely to begin next year. Each time a Cordish tower hits occupancy commitments, it triggers the process for succeeding phases. If demand leads to all four towers—all within blocks of each other, and adjacent to the Power & Light district—upward of 2,000 residents will not only alter the residential picture Downtown, but the retail one.

“It’s going to create a lot more density and foot traffic,” Benjamin said. “We expect a vibrant day-to-day and weekend-activity community. With more people living in a concentrated area, it leads to more opportunities on the retail and restaurant, bar and commercial side. Downtown is already a fun place to live, but this will create virtuous cycle as a more attractive place to work, and that growth in residential density will lead to demand for new office space. When we get to a residen-
tial population of 40,000, you will see Downtown operate at a very efficient and exciting level.”

Dramatic change of a different sort is taking place at 911 Main, in the Commerce Tower building. There, a four-member redevelopment group saw an opportunity for what principal Mike Knight calls a 30-story “vertical neighborhood.” Along with Bob Berkebile of BNIM Architecture and two out-of-town investors, they’re turning 500,000 square feet of tired—and mostly vacant—office space into residential units, retail shops, restaurants, gathering space, educational assets and modern office space. The $90 million project, Knight said, was the result of some good fortune and 20/20 development vision.

The good fortune is the location: It sits directly on the 2.2-mile streetcar starter line, which will connect residents to the River Market on the north, Crown Center on the south and anything in between.
The vision, Berkebile said, was recognizing the historical significance of the building, where others simply saw it through the prism of office space—an unsightly view, given office vacancy rates above 25 percent Downtown.

“No one thought of Commerce Tower as historic, but it was the first high-rise glass curtain wall building in the heartland,” Berkebile said. “It was a really significant building Commerce had created as its headquarters and as a flagship to attract new kinds of companies and interests to Kansas City.”

That, said Knight, became the cornerstone of the group’s appeal for historic-building designation, which was readily granted. That triggered the tax credits that make the project economically feasible and allow luxury residential units to go on the market for 10 to 15 percent below market rates.

“Everybody else it talking about $1.80 to $1.85 a square foot, plus parking” for new residential units, he said. “We’re trying to stay around $1.65 plus, including the parking.”

On top of that, the radical rethinking of what an apartment building should be—packed with many amenities, and close to others—makes it different from many smaller projects.

It includes an HVAC system with residential units on a common loop, rather than with individual condenser units, yielding energy savings of 20-30 percent for heating and cooling. Or check out the common bike storage space, the rooftop gathering place for residents—even the private preschool and eventual K-5 school to attract and retain families.

Knight, in fact, is building this one as though he intends to live in it—because he does. And he hopes that as a parent, he’s shattering the expectations of what a Downtown resident could be, or should be.

“One thing that’s going to change is the concept of a demographic,” he says. “Everybody in development wants to hang their hats on pie charts that say people of x-age want to live Downtown. That’s a pretty generic statement. People who get this concept don’t fit into a pie chart.

“I’m 34, Bob is closer to 70, we’re at different parts of life, but we’re looking at this for access to the entertainment, the services, the culture, the food and the art. So yes, you’ll see Millennials and working professionals here, but we think it can appeal to families, empty-nesters, retirees and people who don’t traditionally appear on those pie charts.”