Lessons from the Underdog 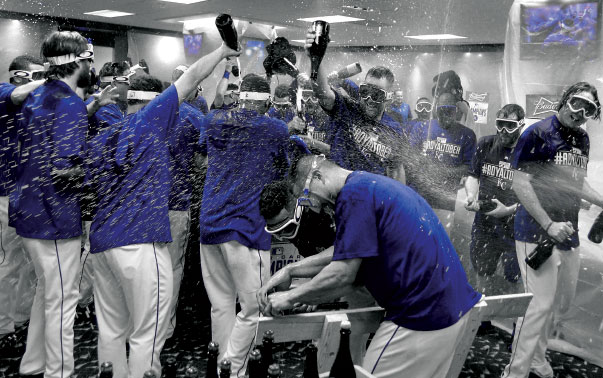 We can all take something away from what we’ve seen the Kansas City Royals achieve this year.

If it hasn’t already been done, a registered Wikipedia user out there somewhere must surely be updating the page “Underdog (term)” to incorporate a team photo of the 2014 Kansas City Royals.

Go back to May 31, when the Royals closed out a 12-17 month with a 12-2 loss to the Toronto Blue Jays. Barely a week earlier, the front office had consigned third baseman Mike Moustakas and his .152 batting average to Triple-A ball and a ticket to Omaha.

Not even two full months into the season, Kansas City stood 26-29, was just half a game ahead of the last-place Minnesota Twins and 11 games behind the Detroit Tigers, who were atop the American League Central as June approached.

Then the magic happened, slowly. Over its final 107 games, the team rallied to finish 21 games over .500, earning a home-field advantage in the one-game Wild Card showdown with the Oakland A’s. Anyone old enough to remember how the A’s abandoned Kansas City in 1967 after years of sad-sack finishes—only to become the dominant force in the American League for most of the 1970s—found that 9-8 marathon victory, in 12 innings, particularly gratifying.

Since then, the underdogs have confronted the team with baseball’s best record this year in the major leagues, the Anahiem Angels, and swept them in three extra-inning games. Then came the ALCS, with a magical weekend in Baltimore, seizing command of that series with a two-game sweep—including a fifth straight extra-innings victory—that brought the home-field edge back to Kansas City for three games and a good shot at the World Series.

Throughout it all, the team has exceeded expectations and sparked America’s interest and support. Who can ever forget the ESPN graphic showing fans in 47 states pulling for the Royals, a map that looked like the outcome of Ronald Reagan vs. Walter Mondale in ’84? Americans, it’s often been said, love an underdog, and we’re seeing that in real time.

Here’s what it means to be part of a team whose performance exceeds the sum of its parts:

Whether they win out and elevate the excitement in this town to new heights, or suffer a sudden, season-ending loss, the Royals have shown us the power of determination, of team play, of what it means to look into the face of defeat and say, “Not us. Not today.”

There’s a lesson in that for all of us—in our personal lives and in the way we approach our work: We can’t win ’em all—but we can play every one of them like we’re hell-bent on it.