Leading the Way in Corporate Philanthropy 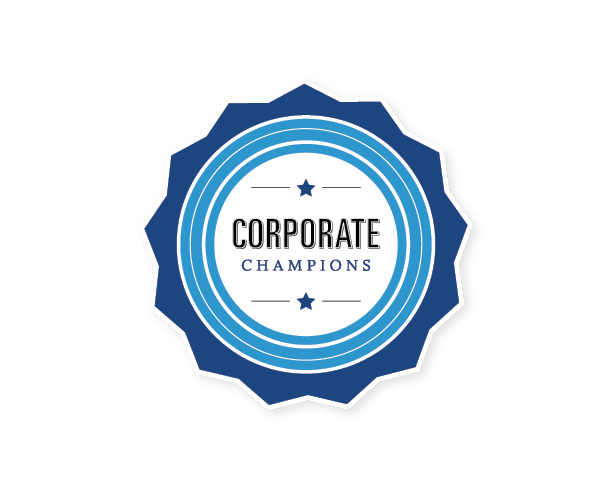 Kansas City has a well-documented—and well-earned—reputation as a city populated by extraordinary givers. But corporations here show that generosity is a key factor in business success, too.

For the better part of a decade, Ingram’s has profiled companies from throughout the Kansas City region that are going above and beyond in efforts to return a portion of the bounty they’ve earned doing business here.

It’s not a legal imperative—there is no law compelling them to set aside a tithing level of pre-tax income for charities. Rather, the leaders of these companies recognized each year as Corporate Champions see their giving as a moral imperative, something they do because it’s the right thing to do.

They don’t do it for bottom-line considerations. And yet, the more of it they do, the better things turn out for their businesses. Some of that is generated by positive word of mouth among beneficiaries, some of it comes from an expanded network of similarly motivated executives serving with them on non-profit boards. All of it, though, is grounded in an unshakeable belief that doing the right thing will make not just the community at large, but their organizations, stronger.

Whether it’s rolling up the sleeves on a housing-construction project, filling shelves at food pantries, or matching employee giving levels, these companies truly are champions, in our view, and we salute their example. Emily Goodroad (left) and Jenn Wilson of CommunityAmerica Credit Union,
pitching in to help with the Alex’s Lemonade Stand fund-raising in Liberty.

For companies that want to give on a local level, it makes sense to think macro when pondering the right causes. Case in point: CommunityAmerica Credit Union. The Lenexa-based company supports a wide range of philanthropic causes dear to its employees. But the organizational framework for that outreach starts with financial literacy, and finding ways to help people manage their money—and, by extension, their lives—more wisely.

“We think that’s an important part of being successful from a life-experience perspective: Can I manage the financial aspects of the things I’m accountable for,” said CEO Dennis Pierce. “There’s a lot of need there, and a lot of people who don’t understand financial issues. People struggle because they don’t have the basics to make good decisions with their finances. Some of that is education, so we think it’s important to start young.” To that end, the credit union is involved in school programs that help foster an understanding of what a monthly income is, and how to build a budget. CommunityAmerica also promotes employee engagement with 12 paid hours off each year for employees to devote to causes that are personal favorites. “We want our employees to be involved in the organizations that they choose, that are significant to them,” Pierce says. “Sometimes, the dollars that go into that are less important than the people resources being made available to those organizations, so we expend and encourage our staff to be active.”

Among the varied organizations to benefit are Harvesters, Happy Bottoms, the Rose Brooks Center, Habitat for Humanity and Alex’s Lemonade Stand. Through that thick weave of cause, Pierce said, what goes around does indeed come back around.

“We believe strongly that we’re a community organization, and if you’re part of a community, you have obligations to support it in as many ways as you can,” Pierce said. “That’s important, because it makes Kansas City the great city it is. And in the long run, that makes it better for us, too, to grow and be successful.

In the end, everybody wins.” Sometimes, business is just business. Sometimes, it’s personal. Sometimes, it’s both. As with Ferrellgas. “Every charity we support, we learn about through our employees,” says CEO Steve Wambold. “When they get involved in an issue or with a cause, we do, too.”
One highly visible example of that is the company’s fleet of bobtail tank trucks, which make propane deliveries to clients across the country. More than a dozen—two based out of Kansas City—are emblazoned with the logos and messages of various charities and non-profits. Proceeds from the sale of every gallon the bobtails pump goes to support those causes.

The program, Wambold says, has a way of bringing unity to a widely dispersed work force.

“We have 400 or 500 people locally, but our plants are based nationally, so it’s hard to get everybody focused on one goal. The bobtails sparked a lot of interest, from a lot of people with great ideas. And they feel good about working for an organization that invests in what its people care about.”

Ferrellgas also backs area charities by encouraging staff members to lend their skills to boards for those organizations.

Case in point, he said, are efforts to benefit the Children’s Center for the Visually Impaired and the Dream Factory. “They generated a lot of local interest, and having executives on boards, including myself, it’s really easy for our folks to get behind these,” Wambold said. “We consider ourselves fortunate that as a company, we’ve done well, and our folks are very charitable. They get behind and support everything we carry out. “

It’s a philanthropic mission, he said, that’s driven from the bottom up.

“We learn about these charitable causes through our employees and their own issues.” Wambold said. “One example I can give you, the Dream Factory, the child of an employee who was chosen to be one the Dream Factory recipients. When an employee or
one of their children becomes ill, we throw support behind them. That helps us stay relevant in 900 locations around the nation,
and we feel like it’s the best way to get involved.” “A lot of companies,” muses Charlie Tetrick, “treat philanthropy as something to do if they have left over money or time.” That’s not going to be the case while he’s running the show at Walz Tetrick Advertising. “We think it’s core to who we are, what our mission is, what our culture is,” Tetrick says. “We think it helps energize our teams, increase our network, and it’s something we believe in here.”

The anchor for that belief system is the donation of  roughly 2,500 to 3,000 hours of pro bono work to charities each year, “and everyone at the agency is encouraged to get involved somewhere,” Tetrick said. That’s the equivalent of more than one full-time employee’s output in a year.

He drew on his own personal network to team up with Bill Goldberg, who made a name in pro wrestling after a short stint in the NFL (the two grew up together in Tulsa). Their collaboration led to development of Drive to Feed, a national program aimed at feeding hungry kids across America.

“There are some really amazing companies in Kansas City; everyone knows the big names and the leaders,” Tetrick said. “But I think a lot can happen with companies our size. When you look at volunteering expertise in communications or our marketing expertise, that’s the kind of thing a company our size can do.”

On a personal level, Tetrick has been a director with the Boy Scouts of America for 11 years, managing their brand and hundreds of marketing initiatives. He’s also one of the five officers of the American Royal—the agency develops the Royal’s entire marketing program. Plus there are agency programs on behalf of the Children’s Miracle Network and the Lyric Opera.

Such engagement allows the agency to take its entrepreneurial zeal in new directions, and it yields buy-in from employees.

“On balance, everyone loves it,” Tetrick said. “Some employees jump in with both feet and get super involved, and they like to come to work and be appreciated for that. All of those connections ultimately help the company, and when we give back, it energizes us and we get to work with some terrific people.” They do some terrific work underground, but Hunt Midwest is by no means in the shadows with its approach to being a good corporate citizen. The national real-estate development company, which became part of the Lamar Hunt corporate family in 1969, still exhibits the civic engagement of Hunt and his wingman, Jack Steadman. That name-dropping speaks volumes about the roots of its philanthropic vision. Fewer than 100 employees work at the mother ship in the Northland, home to the world’s largest underground business complex, SubTropolis.

The highest-profile outward sign of Hunt Midwest philanthropy is the annual Groundhog Run, a benefit for Children’s TLC, and the non-profit’s largest annual fund-raiser. Last year, the 32nd installment, raised $230,000.

In addition, employees have kicked in nearly $1.7 million for the Greater Kansas City United Way since 1987, not long after Hunt took the company private. And, like the better-known Hunt enterprise in town, the Chiefs, the company supports a robust range of non-profit causes, both national and local.

There are also key non-profit board roles—Reynolds followed Jack Steadman’s lead on the Starlight Theatre board, and another executive sits on the Children’s TLC board and liaisons to organize the annual run, which was pioneered in part by Steadman’s widow, Martha. Moreover, the company is well-represented among the membership rosters of area chambers of commerce, economic development organizations and other civic entities.

It’s a very strategic approach to corporate philanthropy. “In general, what we try to do philanthropically, as well as civically, is support organizations that our employees or large customers are involved with,” said President Ora Reynolds.

The balancing act, Reynolds said, is deciding whether to give larger amounts to fewer organizations or spread the wealth around to have the broadest impact. “Everyone has a different feeling about that,” said Reynolds, “and I don’t have the answer.  But we’re trying to make a difference from the philanthropic side and from the civic side, too.” After all, it’s just good business for a company developing residential real estate to support quality schools that attract homebuyers, which help draw in business owners on the commercial, office and industrial realty sides. Joe Ratterman is spot-on when he says the idea of corporations’ matching the charitable giving of employees wasn’t a new idea when BATS Global Markets came into being in 2005.

But there would be nothing common about the fledgling company’s embrace of that concept. “We tried to come up with para-
meters that would be an attractive benefit for employees and provide a framework for investors and our board so they could feel confident where it might go and wouldn’t get too crazy, says the CEO for the Lenexa-based equities-trading company.

Well, maybe “crazy” isn’t the word to describe it, but “extreme” might be: When employees donate to charities, BATS will match every one of those donations, dollar-for-dollar—up to a truly remarkable $5,000 per employee, per year.

“The idea,” Ratterman said, “was to strike a balance with something meaningful, something that would resonate with employees and balance the concerns of investors with how much we’re giving away.”  That’s tricky, he noted: If the level were set too high, only a few highly compensated employees might be able to take full advantage of it. Too low, and it might not carry the desired meaning for employees. BATS has been backing up employees with north of $100,000 in matches for each of the past three years. That’s just a portion of the potential exposure for the company at this point, it’s working out well enough that BATS might consider raising the bar. “I only see it going up, not going down, as the company gets bigger,” he said.

That’s not the only way the company responds to charitable opportunities. It also provides two full days of paid time for employees to engage in their favorite charities. “That’s one where I would say yes, we have likely seen a change in behavior” from the staff, Ratterman said. “And we push that a little harder than the match. We’re more vocal about reminding people that there are two days they can take each year and apply that to some community benefit. I would be really happy if we maxed that out.”