Leadership is the Answer

What’s happening on college campuses today reflects the failure of leaders to lead.

On Nov. 1, Missouri had a moment in the sun as the Kansas City Royals won the 2015 World Series. Eight days later, the world saw the reputation of the entire state tarred—unjustly, undeservedly—by events in Columbia, Mo.

I’m not going to get into the he said/she said nature of the protests at the University of Missouri. There’s simply no way to engage in that agrument and win.  But it should never have come to this: the resignations of University of Missouri System President Tim Wolfe and MU Chancellor Bowen Loftin.

Instead, I’d like to focus on what happens during failure of leadership. It’s not just happening at Missouri; we’ve seen copy-cat incidents pop up at the University of Kansas and colleges nationwide. Most anyone following the cancer spreading on America’s campuses has seen the video of Jerelyn Luther, the Yale student who launched a viscious, public diatribe at a professor there, and apparently has encountered no consequences for her abusive, profanity-laced tirade. Another video making the rounds shows the library protest at Dartmouth College—evidence by itself, some lawyers suggest, that mere protest in that case had  crossed the line into assault and battery, (Google them both).

The common thread in all of these incidents is the notion held by some that they have the right, and the authority, to declare another person’s belief system invalid. And to do so not with debate, but with decibels. The astonishing thing is that this is all taking place at venues that have, for centuries,
been recognized as citadels of free thought and free exchange of ideas, where beliefs are challenged and modified as something we call “knowledge” starts to happen. 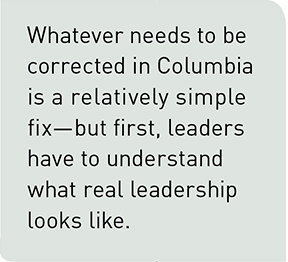 Somewhere along the way, that concept has been corrupted by a belief prevalent among too many students. A belief that when it comes to thinking and debating contentious issues, one size fits all, and it happens to be their size. Historically, such thinking would be disabused by thoughtful discourse that could—imagine this—actually change someone’s mind.

Instead, rigid beliefs and in-your-face demonstrations are being tolerated, even encouraged, often times by the very people who have been entrusted to lead. In the interests of promoting various causes and grievances, or out of fear that they’ll be thought of as being on the wrong side of an issue, administrators haven’t just looked the other way, they’ve abased themselves by yielding to infantile demands issued during temper tantrums. In doing so, they only encourage more of the same bad behavior.

What’s missing from the protestors is a certain kind of civility grounded in the qualities of leadership.

Had these students encountered any thoughtful leadership during their schooling, they might understand that there exist all manner of mechanisms—short of brownshirt tactics—to bring their complaints to the public forum, to engage organizations and regulatory bodies on behalf of their causes, to produce just legal outcomes, and to seek change through persuasion, not persecution.

Over the decades, Ingram’s has dedicated itself to promoting leadership in the business community by recognizing high achievers in any number of ways: 40 Under Forty and 20 in Their Twenties, for the younger set, quickly come to mind. Now nearly 1,000 strong, the numbers of those so recognized have shown us not just what achievement is, but the real traits of leadership, through the various causes they champion within and outside of their careers.

That experience is what led us to begin framing out what we’re calling Ingram’s Leadership Academy, which will debut in April 2016. Our goal is to get the people moving into leadership positions in this region to embrace the qualities of leaders at the highest levels.

That’s diametrically opposed to what we’ve seen on campuses nationwide this month, with lamentable consequences.Leadership means tackling tough issues. It’s not a contest to see who can scream the loudest, who can concede the fastest, who can shirk responsibility or who is most adroit at blame-shifting.

In a world where public safety is truly in peril—people in Paris have just modified their thinking about this—and in a country where the true fiscal calamity of federal debt is about to fall on the self-same heads of our college students, there are awful, legitimate threats that must be addressed and resolved.

Whatever needs to be corrected in Columbia, by comparison, should be a simple fix. But not without  a more dignified and sophisticated understanding of leadership that is both embraced and demonstrated by the responsible parties. Those of us who, at least in part, are helping foot the bill for our public universities, are entitled to at least that much.