Lane4 Property Group plans to construct a three-building industrial-logistics center in Liberty, with three buildings totaling just over 950,000 square feet. Called Liberty Logistics Center, it would be located on 68 acres at the corner of Liberty Parkway and Highway 69 and also include retail sites.

All three industrial buildings are speculative developments, the largest being 741,000 square feet, with the other two at 132,000 square feet and 80,000 square feet. The largest of the three will have 36-foot ceilings and 146 dock doors, while the other two’s ceiling will be at 32 feet. All three will “feature 50 by 50-foot column spacing with 60-foot speed bays, office storefronts and clerestory windows around the exterior,” according to a press release. 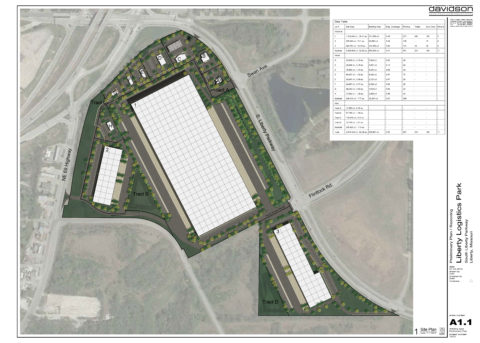 The retail portion will be called Liberty Parkway Plaza and consist of eight pad sites each ranging from 0.57 to 1.77 acres that could feature restaurants and other retailers that would serve both the industrial park and surrounding consumers.

Lane4’s management expects to break ground on the overall project within a month, and the first of the three industrial buildings is forecast for completion mid next year. Joe Orscheln with CBRE will undertake the industrial leasing, while Davidson Architecture and Engineering was also hired to work on the project.

The Kansas City area’s industrial commercial real estate market has experienced robust tenant demand so far this year, according to Cushman & Wakefield, with 5.5 million square feet of space absorbed over the first nine months of 2019, bringing total vacancy rates to 6.1 percent, down from 6.7 percent in last year’s third quarter.