No matter what your sport or athletic interest, you’ll find an outlet for it in Kansas. 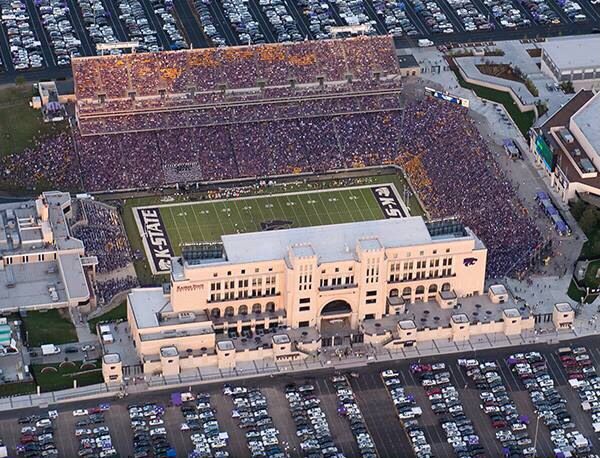 No doubt about it: Kansans love their sports. And they have a lot to choose from. From NFL excellence to a menu of Division I and small-college athletics, from NASCAR racing to pro soccer, from high school competitions to pro baseball, there’s always something cooking on the fields of play in Kansas.

One of the biggest fan engagements is with the presence of the National Football League nearby. Kansas doesn’t have an NFL team to call its own, but pro-football Sundays are part of the DNA.

For those living in the Kansas City area, of course, the Chiefs are the team to follow, and fan loyalty has been repaid with four consecutive conference championship games played at nearby Arrowhead Stadium, just a few miles across the state line in Missouri.

Kansas is a big place, though, and when you get out west, you can find yourself orbiting the Denver Broncos’ sphere of influence, which helps create some in-state fan tension, as both teams are members of the American Football Conference’s Western Division.

Major League Baseball is also an option, with the American League’s Kansas City Royals playing at Kauffman Stadium, right across the parking lot from Arrowhead. Or, again, western Kansans might attach their loyalties to the Colorado Rockies in Denver, playing in the National League. The presence of those teams gives Kansans opportunities to take in games with some of the most storied team names in the sport when the New York Yankees or Los Angeles Dodgers come calling.

As with pro football and baseball, there’s no home-state team to cheer for in the NBA, but that doesn’t mean fans are shut out. Those in southern Kansas, especially, aren’t far away from Oklahoma City, where they can easily get in when the Thunder is playing at home. Those games are rare opportunities for fans here to witness venerable teams like the Los Angeles Lakers, Chicago Bulls, or Boston Celtics in person.

There’s even a pro hockey outlet, with the minor-league Kansas City Mavericks to the east and, at the sport’s top tier, the NHL’s Colorado Avalanche to the west.

Those shared loyalties start to fragment at the collegiate level, where football in the NCAA’s Division I revolved around the Kansas State Wildcats in Manhattan and the Kansas Jayhawks in Lawrence. Saturdays in each town bring tens of thousands of fans out for beautiful weather and ideal conditions for making a day of it at the stadium with pre-game and post-game tailgating. 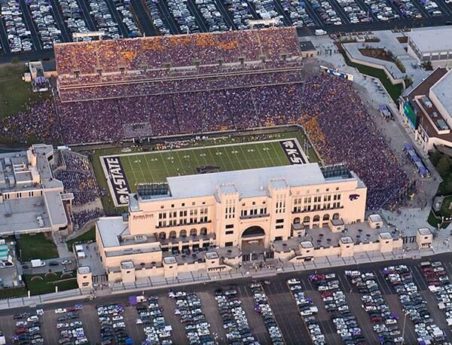 While K-State has had the better of that series between the two Big XII conference schools, the script flips for Division I basketball. There, Kansas is a national powerhouse consistently ranked among the nation’s Top 10 and often in the Top 5. Rarely do the Jayhawks fail to achieve a No. 1 ranking at some point in a season, and they are often a No. 1 or No. 2 seed in the NCAA Tournament during March Madness.

Both of those programs, by the way, will enjoy increased national visibility in the coming years with the right-sizing expansion of the Big XII to actually get back to 12 teams. Over the next two seasons, the conference will phase in Brigham Young University, the University of Cincinnati, Central Florida, and the University of Houston. That will have a big impact on the revenue-generating potential for conference members, especially in football.

At the same time, Wichita State has enjoyed a decade of success as part of the American Athletic Conference, which it joined in 2017 after a long run as a power in the Missouri Valley Conference.

Also, at the Division I level, you’ll find men’s and women’s sports—the so-called “non-revenue’’ teams—in baseball, track and field, cross-country, tennis, volleyball, softball, and, at KU, swimming, and diving. Bowling? That, too, with Wichita State being home to a program with considerable success in the NCAA.

If high-level competition is your thing, but big crowds aren’t, Kansas has plenty to offer. You’ll find NCAA Division II and NAIA teams engaged in football, basketball, and other sports across the state.

The next rung on the ladder is by no means a step down: The Kansas Jayhawk Community College Conference—no relation to the university in Lawrence—features some of the best junior-college competition in the U.S. in both football and basketball. Want to see some of the rising stars of four-year programs before they set foot on those campuses? The Jayhawk Conference is teeming with individual talents whose next step will be in Manhattan, Lawrence, or even some of the nation’s highest-ranked Division I programs.

A generation ago, Kansas City broke into the ranks of America’s NASCAR cities when the Kansas Speedway opened near the Village West retail and entertainment district of Wyandotte County. There fans enjoy top-level racing competition at one of the finest facilities that sport has to offer.

Not much more than the equivalent of a Speedway lap separates that track from Children’s Mercy Park, where the pro soccer franchise Sporting KC takes the field. Two-time winners of the MLS Cup—pro soccer’s Super Bowl—the Sporting franchise is much more than a soccer venue; the organization has done much to promote youth soccer engagement, seeding the next generations of fans in the region.

And still within the Village West orbit is pro baseball with the newly rebranded Kansas City Monarchs. New ownership in 2020 placed a high value in connecting that team with the rich history of baseball in the Kansas City area, paying homage to the Negro Leagues baseball team that played under that same name nearly a century ago. The team also established a working tie with Kansas City’s Negro Leagues Baseball Museum, creating instant synergy for fans making the trip to KC for more than just a game.

At the community level, you’ll find high-school sports that can serve as a civic anchor in small towns across the state. When the Friday night lights go on, they attract nearly everyone in each community to support their 8-man football teams in the smallest communities. And at the top end, established winners in traditional 11-man football can put more fans in the stands than you might see at some small-college competitions.

If an experience like that is on your bucket list, you can’t go wrong checking out the Derby Panthers, reigning champions of Class 6A, representing schools with the biggest enrollments in Kansas. The Panthers, in fact, have appeared in seven straight 6A title games, winning five of those. At the other end of the scale, if you can get to tiny Hanover near the Nebraska border in north-central Kansas, you’re likely to see a winner that infuses that community with civic pride: Hanover has won four of the past five 8-man Division II state championships.

As a final point, don’t overlook the opportunities for direct athletic participation. Kansas has multiple large reservoirs that attract fans of boating and water skiing in the summer, the fishing and hunting opportunities are first-rate, the suburban areas are ringed by walking and biking trails, and the hiking potential in a state this big is almost unlimited.

Whether you’re a fan or a fanatic, you’ll find plenty of reasons to get off the couch and into the game when you’re here.