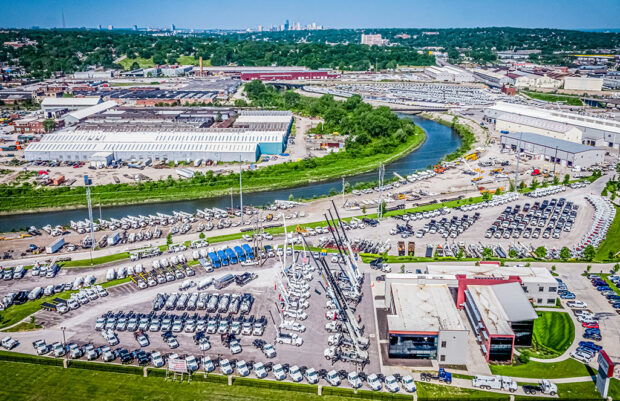 What’s a Big Deal? It could be a business transaction with billions of dollars on the line. It could be a 10-figure development project that will change the face of an entire city. It could be a new-to-market asset that opens new lines of commerce or research opportunities for the region.

The Kansas City area saw plenty of each in 2020, a year of crushing setbacks and unprecedented recoveries. And not all of them were local affairs. Take, for example, Indiana-based Elanco, which closed a $5.2 billion acquisition of the animal-health division for German pharmaceutical giant Bayer. It was a global deal with a significant Kansas City impact: Bayer Animal Health, now a division of Elanco, had its world headquarters here, in Shawnee, where roughly 600 people are part of the regional animal-health corridor. Most of the headline-makers of 2020, though, were considerably more local, in most cases providing a makeover to key companies or business sectors that define this region. Each of those deals and developments, in its own way, holds the promise of moving the Kansas City area forward in terms of economic vitality, job creation and quality of life. Perhaps one of the biggest deals of the year, however, is the one that didn’t develop. That came in November, when Evergy announced that it had rejected a $15 billion solicitation from NextEra Energy. This, just a year after the formal union of KCP&L parent Great Plains Energy and Topeka’s Westar Energy created a $5 billion bistate energy behemoth. Part of the significance of rebuffing NextEra’s overture was that it might well have been the last big decision to cross the desk of Terry Bassham. He retired at the end of 2020, turning the reins of president/CEO over to longtime Texas energy executive David Campbell.

Sprint Deal Closes The dollars don’t come any bigger—or didn’t last year, anyway—than in an acquisition that carried national implications: T-Mobile’s $23 billion deal that ended Overland Park-based Sprint as a brand. The deal formally closed on April 1, with the new parent declaring that it would operate with a two-headquarters model. The massive 3.8 million-square-foot campus, sold by Sprint to Wichita’s Occidental Management the previous year for $250.9 million, has been rebranded as Aspiria, and will be transformed for use as office and retail space.

Custom Truck Rolls On It didn’t take long for one of the KC region’s newest additions to the billion-dollar-revenue club—Custom Truck One Source—to see an ownership change. Nesco Holdings announced in early December that it had reached a deal to buy Custom Truck for $1.475 billion. Both companies specialize in truck and heavy equipment with rental, sales and aftermarket parts and service. Custom Truck, founded by six members of the Ross family, had cracked the nine-figure revenue mark for the first time in 2019.

W&R Meets Crocodile Dundee That thing about Kansas City’s excessive humility compared to the coasts? It’s real. What else can explain the collective reaction to news that a prominent company with a national reputation had been acquired by an outside firm? In this case, it was financial-services giant Waddell & Reed, snapped up by an Australian conglomerate, Macquarie Group. That $1.7 billion deal, announced in November, cast a bit of a cloud on the future of the new $148 million headquarters W&R is building Downtown. City officials say the incentive-laden project will move toward completion. But will a division of Macquarie be the tenant?

DFA Nabs Dean Foods Dairy Farmers of America, the largest private company by revenue based in the Kansas City area, announced in February that it was acquiring Dallas-based Dean Foods for $425 million. The deal gives DFA 44 of Dean’s 50 manufacturing facilities and includes brands such as  Land O’ Lakes, DairyPure, TruMoo, Tuscan and others. The deal could potentially increase DFA’s revenues, which hit $15.8 billion in 2019, by roughly 50 percent, based on Dean Food’s 2109 performance.

New Owner for ProPharma A New York investment firm, Odyssey Investment Partners, reportedly lays out more than $500 million to acquire Overland Park’s ProPharma Group. Blending organic growth and strategic acquisitions in recent years, ProPharma Group had been on a long, steady march toward $100 million in revenues before cracking that threshold in 2018. Founded in 2001, ProPharma operates on four continents with its compliance consulting services for pharmaceutical, biotech and medical device companies.

RIA Cashes In Atlanta-based OneDigital, a strategic advisory firm, acquired Resources Investment Advisors of Overland Park in a deal announced in February. Terms of the transaction were not disclosed, but RIA is among the Top 10 wealth advisories in the Kansas City region, with nearly $45 billion in assets under management for 2,600 employer-sponsored retirement plans. RIA, founded in 1987, kept its brand and now operates as “A OneDigital Company.”

Golden Plains Rising On the development side in 2020, no deal was bigger in raw dollars than the emergence of Golden Plains Technology Park. In July, the Kansas City Council fast-tracked a three-phase plan for development of an 882-acre site at I-435 and U.S. 169 in the Northland. Estimates suggest the total project cost, with a high estimate of $6 billion, could easily surpass the Cerner Innovation Campus development that previously stood as the largest in Missouri’s history. The tech park, proponents say, would be the world’s biggest, and would thrust this region into the front ranks of the U.S. data-center market.

An Amazon Package In one of the biggest straight-up facility acquisitions of the year, Amazon.com’s Wyandotte County fulfillment center fetches $107 million from JDM Partners of Phoenix, which acquired the property from an affiliate of USAA Real Estate, based in San Antonio. The center, which cost $300 million and opened in 2017, employs more than 2,000 workers for the e-commerce giant.

Industrial Ooomph MDH Partners announces that it will buy 1.39 million square feet of industrial space in Olathe’s I-35 Logistics Park, roughly doubling its footprint in the Kansas City market. This deal includes its 821,663-square-foot Building B and 567,115-square-foot Building C, on 107.6 acres along South Green Road.

Innovation Maturation Cerner, meanwhile, wasn’t sitting on its developmental laurels. By mid-summer 2020, it had essentially completed Phases 3 and 4 of its massive Innovations Campus development, adding 772,000 square feet of space. Four towers are now up and running, putting the $4.6 billion project nearly halfway to the original 10-tower design. But the monkey wrench thrown into America’s office-development market by the global pandemic may end up changing that vision if more workers are able to operate from home or remote locations in the years to come. Will the full buildout of that 290-acre campus be completed as envisioned? Stay tuned.

Chewy Throws Belton a Bone Chewy, Inc., the on-line distributor of pet food and products, announced in July that it would build an 800,000-square-foot e-commerce fulfillment center in Belton. By 2022, it is expected to employ more than 1,600 people. Total estimated project cost: $143 million.

Urban Arrival In August, Philadelphia-based Urban Outfitters unveiled plans for an 880,250-square-foot distribution center near the Kansas Speedway in Wyandotte County. The facility near Village West will be the company’s biggest. When finished in early 2022, projections say, the $403 million project will yield 1,000-full-time and nearly 750 part-time jobs.