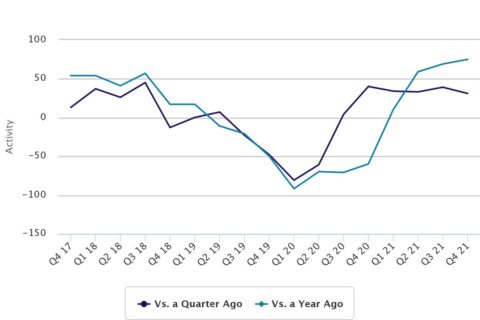 With oil prices on a steady increase throughout the year, energy-sector activity held its gains in the fourth-quarter of 2021, the Federal Reserve Bank of Kansas City says in its most recent assessment of activity in the 10th District.

“District drilling and business activity continued to grow through the end of 2021,” said Wilkerson. “Firm revenues have risen along with higher wages and benefits for workers. Contacts also reported higher capital spending plans for 2022 compared to 2021.”

The quarterly survey provides information on current and expected activity among energy firms in the district, which covers the western third of Missouri; all of Kansas, Colorado, Nebraska, Oklahoma and Wyoming; and the northern half of New Mexico.  It monitors oil and gas-related firms located in or headquartered in the Tenth District. The results reveal changes in several indicators of energy activity, including drilling, capital spending, and employment.

Firms were asked what they expected oil and natural gas prices to be in six months, one year, two years, and five years, Wilkerson said, and their expectations for oil prices increased to the highest levels since the survey began that question in 2017.

Results from past surveys and release dates for future surveys can be found here.