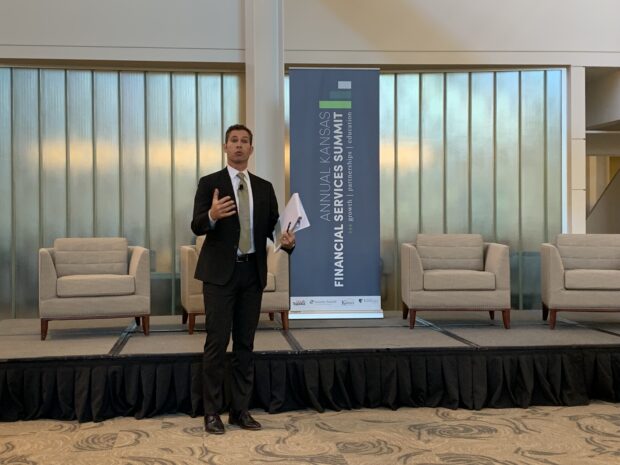 Kansas is great at educating its young people and getting them prepared for the work force. But when they leave for other states, Kansas employers are stuck looking for talent.

“Our most valuable export is our educated kids to companies in other states, and that’s not good,” said John Guyot, senior vice president and general counsel at Security Benefit Corp., which hosted the annual Kansas Financial Services Summit at its Topeka headquarters on Nov. 6.

Part of the problem is that the state has lagged behind others in the past 10 years in several key economic categories, said Marek Gootman, director of strategic partnerships at the Washington-based Brookings Institution. In 2008, Kansas ranked 24th in the nation in economic growth, and this year it is 43rd, he said. In wage growth, he said, it ranked 21st in 2008 and is 45th today.

What Gootman said might surprise many is that the No. 1 state where Kansans leave for employment isn’t on one of the coasts or an interior major metro like Chicago. It’s Missouri. Texas came in second, but third was another close state seemingly similar to Kansas–Oklahoma. Colorado is fourth and California is fifth.

“People are not leaving for places that look a whole lot different from what you offer,” Gootman said.

Part of the problem, said speakers on one of the summit’s panels, is that the state doesn’t have a consolidated approach to retaining and attracting talent, and part of that has to do with a lack of marketing itself to other areas. For example, Kansas had 14 international trade representatives in 2010 and now only has two, said David Toland, Secretary of the Department of Commerce and member of the Ingram’s 250.

“Any business that’s worth its salt is doing strategic planning, and as a state, we haven’t done that,” he said.

One of the problems is that Kansas is too decentralized, and that different communities need to work together and convey to the rest of the world what Kansas produces, in addition to agriculture, said Alan Cobb, president and chief executive officer of the Kansas Chamber. Every Boeing 737 fuselage, for example, is built in Kansas, and the state is home to several large and successful corporations or divisions, including a major Wyandotte County office complex for North Kansas City-based Cerner Corp. The state also boasts a strong financial-services industry.

“We have some incredible companies that are here,” Cobb said.