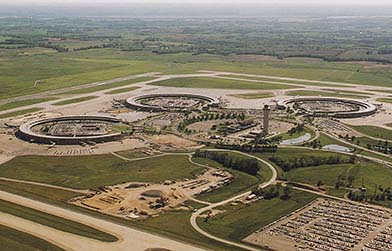 With an additional shoe provided by Burns & McDonnell, Mayor Sly James has kicked the legs out from under arguments that the city can’t afford a new single-terminal design replace the existing structure of Kansas City International Airport. The engineering and design company’s CEO, Ray Kowalik, was on hand this morning as James laid out the vision for an innovative project, privately financed by Burns & McDonnell, on the site of what is now KCI’s closed Terminal A.

In a news release announcing the proposal, the city said the final terminal design would retain the conveniences that have made the curren structure so popular with local users–and generated considerable opposition to change from that group, as well–including access to parking, proximity to gates, and curbside drop off and pick up.

Officials said that a privately financed airport terminal might well be the first of its kind in the nation, funded by private investment and airport usage fees. In a move to placate anti-tax opposition to proposed changes, no funds would come from the city’s general fund, from new taxes, or existing bonds.

The plan must pass muster with the City Council, then go up for a public vote by residents of Kansas City, Mo., in November.

“When we pressed ‘pause’ on this conversation last spring, I asked the business community to develop a viable plan for moving forward that ensures our residents we will maintain the convenience that is so important to travelers, as well guaranteeing that the city’s financial coffers are not at risk with the construction of a new single terminal,” James said, calling the proposal “the kind of innovative thinking that Kansas City should be proud of.”

Burns & McDonnell would privately finance the design and construction, and the city would remain the sole owner and operator. At its meeting next Thursday, May 18, the City Council will consider a memorandum of undersanding outlining the proposal, with the council’s Airport Committee calling for public comments at two meetings the following week.