In a year of unprecedented challenges, these businesses blazed new trails for growth. Look for bigger numbers in 2022. 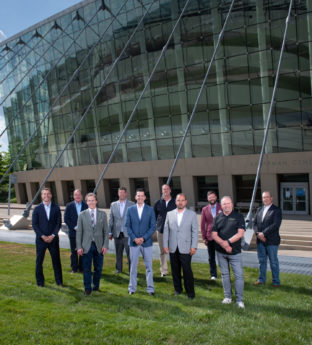 Throughout its first 35 years, Ingram’s Corporate Report 100 has largely been a story of entrepreneurship. Yes, large companies still crack this list of the Kansas City region’s fastest-growing companies, and in most years, in impressive numbers.

That says more about the entrepreneurial DNA of those organizations than what you might discern from seeing improvements on a top line that’s already quite sizable. It’s simple math, really: it’s easier to generate four-figure percentage growth on a smaller revenue base than it is at a billion-dollar company.

At the high end of the CR100 list, invariably, are smaller companies that tend to be younger. A few of them are poised to be gazelles; more are destined, ultimately, for failure and obscurity, or, if they are among the survivors, acquisition by a larger entity.

For three and a half decades, all of this has been the case. Often, you’d see a handful of firms at the very top with three-year growth rates of 4,000 and 5,000 per-cent—in rare years, even bigger leaps. There would follow a succession of companies with triple-digit growth, anywhere from 100 and 999 percent. Often, several dozen of them, and in very rare instances, all 100 surging past 100 per-cent growth (as we last saw in 2018).

In most years, the distribution of companies along a growth curve would also follow a geometric progression of sorts: More companies would be in the 70-80 percent range, for example, than in the 80-90 percent cohort, which it-self would be bigger than the 90-100 group. The further down you went, in other words, the more crowded the field.

But not this year.

For reasons we can only assume have to do with discouragement over disclosing an off year in the wake of the global pandemic of 2020, you’ll see a good deal more triple-digit growth firms (20 of them this year between 100 and 200 percent), than companies in the 90-100 percent growth range. And even among companies reporting numbers, the percentages were down substantially—in some cases, rep-resenting overall real-dollar declines, let alone slow growth.

This largely reflects what’s gone on nationally since early 2020. In a paper this spring for the National Academy of Sciences, a team of six authors from esteemed institutions like Harvard University and the University of Chicago took a deep dive into a survey of 5,800 small businesses in America and the impact of the COVID-19 virus on their performance.

You’ll see some of that same dynamic at work in this year’s Corporate Report 100. But the reconstruction of this year’s fast-growth roster is not a function of all-COVID, all the time: Since that inspirational year of 2018, when every company on the list was a triple-digit winner or better, the percentages at No. 100 were already ebbing, well ahead of a pandemic. First, to 83 percent in 2019, then to a hair under 80 percent last year.

Reading the tea leaves, then, for the 2022 Corporate Report, it’s reasonable to assume there will be a big rebound. How big? We’ll know next June. Stay tuned.

• A telling sign of how the 2020 pandemic, in part, affected growth curves: The average growth rate was 92.48 percent, but that was down sharply from the 126.09 percent figure from the previous year.

• Almost one-fourth of the companies on this year’s list—24—are showing up here for the first time.

• The oldest company here—for a third straight year—is Pioneer Music, which dates to 1869. That puts it just ahead of two law firms, Lathrop GPM, founded in 1873, and Spencer Fane, founded in 1879.

• Two companies—the Brain Group, and Summit Heating & Cooling—made the list (and the Top 10) in their first year of eligibility.

• Three companies are here this year with double-digit appearances: Intouch Group, now an 11-time winner, and a tie with 10 each for ECCO Select and Platinum Realty.

For 36 years, Ingram’s has had its finger on the pulse of Kansas City’s fastest-growing companies with our Corporate Report 100. Tens of thousands of companies have submitted financial-performance figures over that time, and well more than 1,200 have earned their way onto this prestigious ranking at least once. Glancing through the No. 1 honorees in each of those years evokes images of companies that went from startup to titan … or to something else. Fast growth for many has been the pathway to bigger and better things. For others, it’s been more than a curse, it was a riddle that couldn’t be solved. But each year was a snapshot in time, taking us back to what were once halcyon days for many. The upshot of all that change? While most of the companies recognized over the past decade are still hard at work, 16 of the 25 honored through 2010 have been acquired, moved, or ceased operating in Kansas City. Perhaps the ancient Romans had it right:  All glory is, indeed, fleeting.