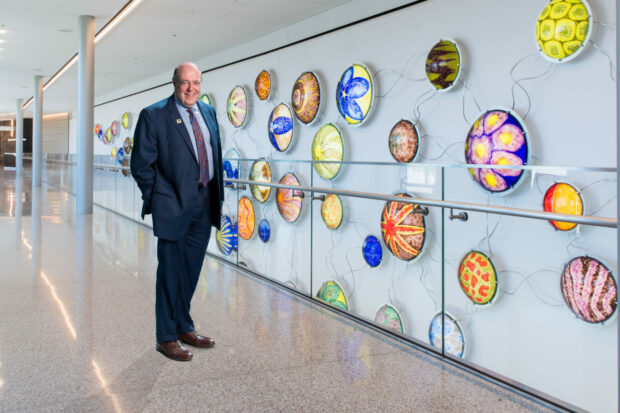 It’s 1996, and Bob Page’s first day on the job as chief financial officer at the University of Kansas Hospital. Right off the bat comes a brief moment of temporal displacement: Sitting in the executive offices of the hospital in Wyandotte County is Wayne Lerner, Page’s former boss at BJC Health, 240 miles distant in St. Louis.

“What are you doing here?” Page asks, just a bit befuddled. “I’m here consulting,” Lerner says, “to see if we can help you guys stay open.”

Thus was Bob Page introduced to the scope of the challenge ahead. Nearly 25 years later, he says, “I had no idea how bad things were, or how it had occurred. I was just happy to have a job.” It would become more than just a job; it would become his mission, his passion, and in a very real sense, his family. Page would play a key role in helping the underperforming state-owned hospital emerge as a successful stand-alone public health authority, become its chief operating officer, and in 2007, its CEO. Along the way, he helped orchestrate perhaps the biggest organizational turnaround in Kansas City’s history.

Today, The University of Kansas Health System has more than 13,000 employees, six acute care and two behavioral health hospitals across Kansas (including the original campus at 39th and Cambridge), a turnover rate that’s been slashed by almost two-thirds, an astonishing $2.9 billion in 2020 net patient revenues—and most important to Page—patient-satisfaction scores among the highest in the nation, as well as quality performance comparable to the best academic medical centers in the country.

And despite a pandemic that has rocked the planet and U.S. health-care system finances, the system stands as strong as ever today.

For those reasons, and more, Bob Page is recognized as Ingram’s inaugural Executive of the Year.

Each aspect would come from a lifelong understanding of what it means to be part of a team, and what it means for each individual on that team to perform at the highest possible level.

A Team Player Early On

From his youth, Bob Page had a passion for baseball. Still does, as a Royals fan transplanted from his native Elgin, Ill., and as a fan of his home-state Chicago Cubs. Young Bob Page had visions of taking his impressive curveball and third-base skills to the majors one day. That dream died with a severe knee injury when he was just 12, so he switched gears with another youthful passion, his trumpet. He’d make it big with a band.

That determination—to dream, and to follow the dream—comes in part from the way he and his brother were raised by their parents. “Mom was an administrative assistant, and dad was a traveling salesman,” Page says, “but they both taught me the basic, core values of what it means to be a human being. I didn’t have a silver spoon, but I knew what excellent work looked like. From baseball, I learned the value of being on a team—it takes nine to play the game, not one.” Playing the trumpet, as well, meant blowing the notes as close to perfection as possible: “You have to be the best at what you’re doing,” he says.

Armed with that mindset, he headed to Illinois Wesleyan University as a young man, and quickly learned excellence must be the goal even when the tasks don’t mesh with your passions. A professor of American literature named Bob Bray awarded Page a D grade on his first collegiate paper. “That,” Page remembers, “was a wake-up call. I was fortunate enough to get good grades as I went through high school, but my first paper in college, a D—I knew then I had a lot to learn; you don’t just get to show up, you have to work. It was frustrating to start my college career that way, but it reinforced the importance of hard work.”

One other thing Page brought to college: “I loved math,” he says. “It came easy to me, so I started as a math major. But once it really hit me, ‘Who cares what the area under a curve is? What can I do with that?’ I had two options: Insurance actuary, which is incredibly boring, or accounting, which surfaced as an option in my sophomore year and became my major.”

He left IWU with an accounting degree, passed the CPA exam and began his career for what was then a Big Eight accounting firm, Price Waterhouse, in Peoria, before transferring to St. Louis where, he felt, “they were trying to make a banker out of me.” A little more than two years after college, Bob made the move into health care, as internal auditor at Jewish Hospital, which today is part of BJC Health System. His career advanced, and he eventually had 150 people reporting to him as director of patient accounts. Life was good. But something was missing. “I was bored out of my mind,” Page says. “It was the same thing over and over, month in and month out.” Although he secured a position in the corporate office, the family decided to move to Lawrence, Kansas.

Perhaps the defining characteristic that most sets Bob Page apart from executive number-crunchers has been his understanding that numbers don’t move the way you want them to if the people behind those numbers aren’t satisfied and engaged.

At KU Hospital in 1998, the dissatisfaction ran high. The first staff survey he saw, he says, generated three profound revelations—none of them good. “Employees were not proud to work here, they wouldn’t recommend friends work here, and they wouldn’t recommend our hospital for care,” Page says. “In addition, while the market size was growing, we were shrinking in patient discharges and market share. And worst of all, we had no money. How does that feel? That was The University of Kansas Hospital in the 1990s. And we were the only academic medical center in the state.”

In 1997, outside consultants suggested multiple pathways out of that mire: “They said if we didn’t fix things, we’d be losing $20 million a year by 2000,” Page recalls. “They gave us six recommendations, including selling or closing the hospital.”

The path chosen, eventually, would begin with independence from state control.

In 1998, based on legislation passed by the Kansas House and Senate, the hospital became an independent public authority governed by its own board, and responsible for its own financial health, in what legislators in Topeka called a “Hail Mary pass to save us,” Page says. And on Oct. 1 of that year, the executive vice chancellor for KU medical center came to the Polsinelli law offices with a check for $23 million and signed the agreements, which enabled the hospital to finally chart its own path.

That check represented 30 days’ worth of operating cash for a 1970s-vintage hospital that was “totally under-capitalized,” Page says. “We had equipment nobody would service; they told us it needed to go to a museum when we were done with it, because they didn’t have parts for it anymore.”

More than 2,200 employees had to leave the comparative job security of state employment to sign on with the new organization. The task now was to engage their hearts and minds in the work needing to be done and give them the tools to realize their own dreams—the ones that called them to health care in the first place, Page says.

“Driven by a culture laser-focused on patients, we asked staff to do three things,” Page noted. “The first to focus on what was most important to patients—their outcomes and experience of care. The second was to suspend the disbelief, which had grown from years of trying to make change within the state system. The third was to make improvements at a speed they had never experienced in their careers with the hospital.”

Flipping that script would require a focus on results—not theory, analytics or process over outcomes. It meant setting a vision of what can be, organizing for success (Page is a big fan of Jim Collins, of “Good to Great” fame), hiring the right people (and cutting loose the wrong ones) with behavioral interviewing, implementing market-leading compensation and benefits structures, and creating success metrics grounded in patient satisfaction and quality.

It meant emphasizing the need for teamwork and developing training structures that reinforced it. It meant stepping up reward and recognition programs. “If you don’t celebrate the small wins, you’re never going to get the momentum to get where you need to be,” Page says. It meant effective storytelling to share tales of exceptional achievement or service, and it meant ensuring sustainability with all those initiatives.

All of that, he says, must be wrapped within a framework of team-first. Page is adamant and sincere when he says he didn’t build this hospital; his team did. He points to talents like Kansas City market President (and health system COO/Chief Nursing Officer) Tammy Peterman, his C-suite team, department heads, physicians, nurses, certified and auxiliary staff as the masons—every one of them, he believes, laid each brick of success.

Slowly, that emphasis on patient service began bending the curve on patient-satisfaction scores. Staff wanted to stay with the organization and recruited others to join them. Quality rankings improved and the hospital began to be recognized among the best in the country. Admissions began climbing—135 percent in the first five years—and from 13,000 of them in 1998, the hospital system had grown to more than 45,000 last year. And the bottom line began to stabilize and support record levels of capital and staff investment.

An executive cannot simply decree cultural change, Page says: It must be lived, and demonstrated by example. That means being on-site at 6 a.m. to celebrate an employee or department recognition, or being there at midnight for the same. It means giving staff the tools they need to succeed, reinforcing the message every day, recognizing outstanding achievement and continually raising the performance bar: Yesterday’s success cannot become a drag on tomorrow’s.

“As CPAs, we tend to focus on market share, market size and the bottom line,” Page says. “But positive outcomes and satisfaction are delivered by a competent, committed and engaged staff. That’s what leads to strong, sustained growth and strong, sustained financial performance.” And it’s not limited to health-care settings. “It could be anybody’s industry,” Page says. “It doesn’t have to be a hospital.”

Page has a favorite story about what culture is, what it looks like, and the impact it has on the quality of a patient’s experience. About a decade ago, the hospital was treating a veteran who was losing his battle with cancer.

As the end approached, a nurse asked if she could get anything for him. “Yeah,” he cracked: “I’d like a blonde to jump out of cake.” Clearly, this was not a medical service one finds in the ICD-10 code manual. A few days later, he modified his request: How about a dancer—blonde, brunette or redhead—to perform a bedside song and dance routine? The nurse, on her own, called the Folly Theater, found out that a burlesque troupe was in town, and made it happen, with the patient’s family beaming around him. The veteran’s battle with cancer ended just five hours later.

That story, Page says, is precisely what it means to focus on the quality of a patient’s experience. “We don’t have a policy on how to go get a dancer. And we don’t have a policy on how to bake cakes for patients to celebrate their birthdays or how to marry a couple in palliative care,” Page once told his alumni magazine at Illinois Wesleyan. “What we have is a culture that says we do the right things for our patients. In fact, at every orientation, we say, ‘Here’s the deal, guys, if you’re ever struggling, ask yourself one question: What’s the right thing to do for the patient?’ “If you do that, you’ll be fine.”